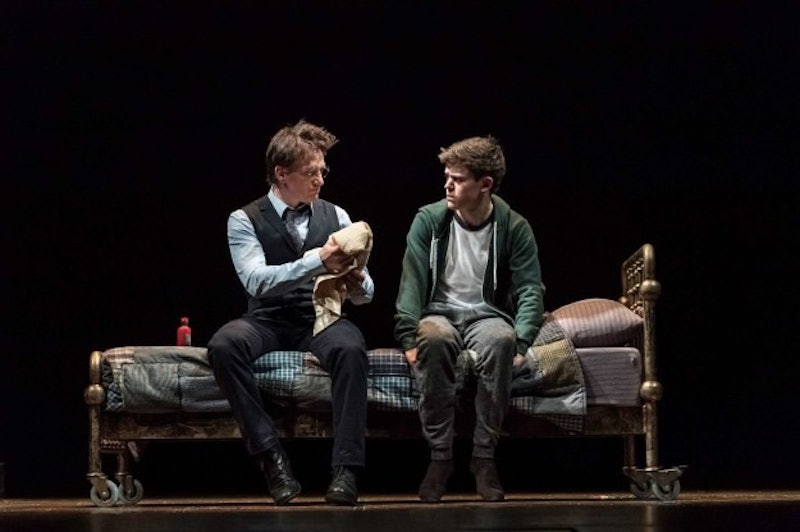 I know you're still weeping about not getting to see Harry Potter and the Cursed Child , and twitching eagerly as you read the companion book again and again. Interests have been perked every since it would discovered Cursed Child is about Harry's past, but, when images clearly showed it would follow the trio's children, it excitement reached a fever pitch. Now that the book is finally out for those of us who couldn't get tickets, we know that Time-Turners play a huge role in the events, despite the fact that all of the Time-Turners in the Ministry were destroyed (or rather locked in an endless loop and thus useless) during the Battle of the Department of Mysteries. As for how Time-Turners are used in Harry Potter and the Cursed Child, let alone even come up, those of you who can't afford the book should come along with me on this spoiler-filled journey.

In the later Potterverse, Draco implored Harry (now Head of Magical Law Enforcement at the Ministry of Magic) to announce that all Time-Turners had been destroyed. Apparently, there's gossip around town that Voldemort used a Time-Turner to impregnate Draco's wife, and Draco wants to shut down those rumors; I can imagine it's hard enough on Scorpius being Draco's son, let alone You-Know-Who's. However, a banned Time-Turner is found in possession of an old Hogwarts colleague, Theodore Nott, and Harry seizes it. As for Theodore, well, he's put into Ministry custody for having it.

And for those of you who are wondering how this Time-Turner weirdness with Voldemort is even plausible, given Hermione's Time-Turner only let her go back a few hours, Hermione asks straight off, "It's not just an hour-reversal turner — it goes back further?" Then, she later says, "It's entirely different to the Time-Turner I had." You can practically hear her talking to the Harry Potter nerds ready to cry foul on the details.

Amos Diggory, hearing the rumor that Harry has a Time-Turner, comes to the Potter home to beg Harry to use it to bring back Cedric. Harry is basically, like, "LOL, what Time-Turner?" and I'm basically like, "LOL bring back Cedric?" But, meanwhile, Albus is secretly listening in on all this and, after a mighty fight with Harry that includes the horrible words "I wish you weren't my son," he enlists Scorpius' help to go back in time and save Cedric from dying. Why? Because Albus knows Harry Potter is a man who has made a lot of mistakes, and he wants to set one of those mistakes right, and give a son back to a father who cares about that son. You can only imagine what happens from there. It takes a very Back to the Future Part II kind of turn.

So, without getting into further, story-ruining details, the idea is this: an illegal Time-Turner is the catalyst for all the chaos that erupts in this play. It allows us to navigate into Harry Potter history while still focusing on this new squad of young wizards. And at least Albus and Scorpius had good intentions, which is, you know, nice.

Until you start creating alternate universes where Voldemort wins the war. Whoops.