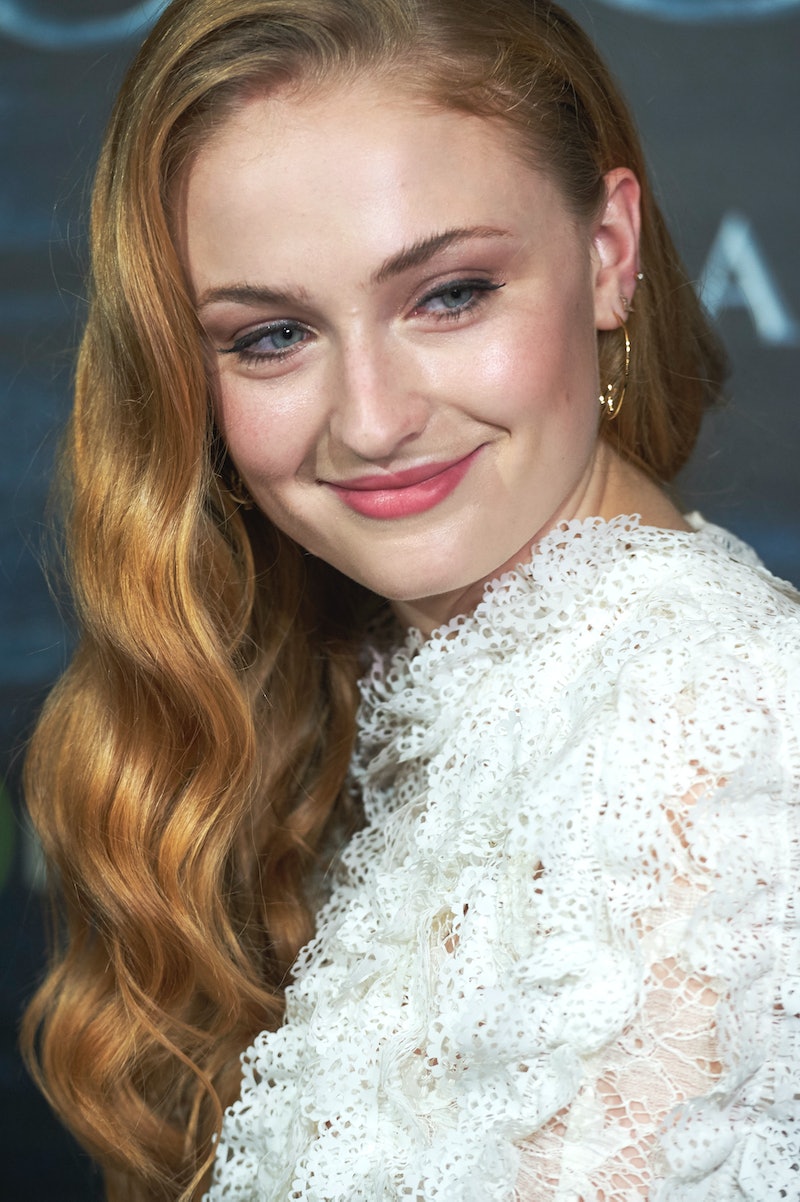 You may have originally come to know and love Sophie Turner as a redhead, but your entire outlook on her and her hair color is about to change. Back in 2016, the Game Of Thrones star dyed her hair white blonde, which made fans who had thought Sansa’s copper strands were also Turner’s by nature. To this day, people are still occasionally wondering: What is Sophie Turner’s natural hair color? The answer might surprise you.

Pre-bleach, we’d seen Turner as Sansa Stark in GoT and on virtually every red carpet rocking the same fiery red color she had for the show. But in 2014, Turner told Marie Claire she is naturally blonde, but dyes her hair more of an auburn color for the show. In 2019, she told Refinery29 that she eventually started wearing a wig to shoot the show, since her strands were so fried from trying to go back to blonde between seasons. While Turner told Marie Claire she likes the auburn, we actually have only seen her go back to the shade for TV, movie, and modeling jobs.

Since we love her no matter her hair color, here’s a rundown of her shade transformation, from Sophie Turner’s natural hair color to her stints as a redhead to the bleach blonde she seems to be attached to now.

Since she clearly has a great colorist who must bless her with regular visits, we really only see Turner’s natural blonde when she posts throwback photos on Instagram, like this one. Turner became a Wella brand ambassador right after she bleached her hair, and she credits the brand’s products with keeping her hair healthy as she maintains her lighter strands.

It’s no wonder fans thought Sansa’s copper was also Turner’s natural hair color: This hue looks amazing on her. There were clues, though, even before she went back to blonde — like this photo from the Season 3 premiere where her blonde roots are making an appearance.

Since it was for a character, that shade of red never really shifted, save for a stint with reddish-black strands in Season 5.

Ever since Turner went back to her natural blonde in 2016, she’s stuck to the shade — only changing things up for work. The hue has remained basically the same too, although she has played around a bit with the style, like when Turner was spotted with bangs in May of 2019 while promoting X-Men: Dark Phoenix.

While it seems like Turner’s natural blonde is back for good, she just might surprise us: In 2017, Turner told InStyle that “Maisie [Williams] just got pink hair and it looks so good on her. It’s kind of inspiring me to maybe change my hair up a bit. I think that maybe not this year, but next year I’m so down to even go brunette or do something fun like pink, blue, or green.” While it didn’t happen in 2018, maybe she’s just taking her time to plan a change that will blow us all away again.

More like this
The Chicest ’90s Updo Hairstyles To Try
By Paris Giles
Lily Collins Got Shaggy Curtain Bangs For Emily In Paris Season 3
By Audrey Noble
12 Bellissima Beauty Moments From Milan Fashion Week S/S 2023
By Olivia Rose Ferreiro
Halsey Debuted A Copper Pixie Haircut, & It's Such A Fall Vibe
By Olivia Rose Ferreiro
Get Even More From Bustle — Sign Up For The Newsletter

This article was originally published on July 29, 2016