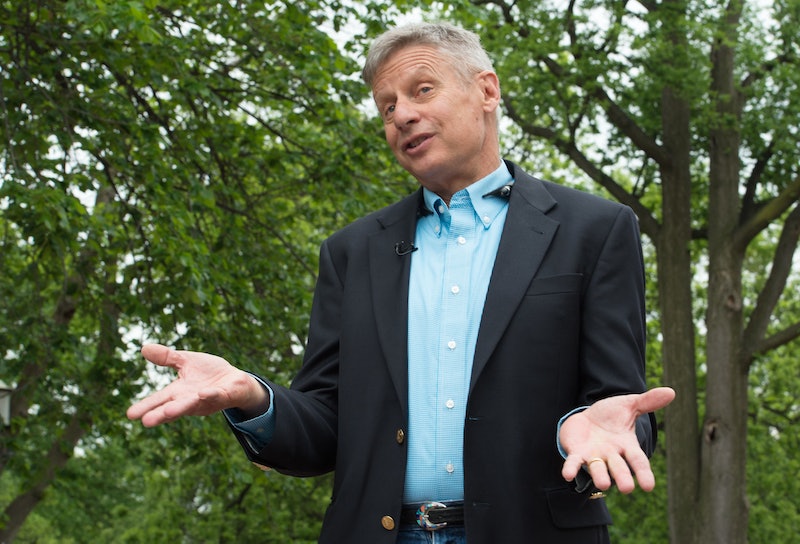 If you’re a former Bernie Sanders voter like me, I’m assuming the current options for you on this day after the crowning of Hillary Clinton as Democratic nominee look like this: Vote for Hillary Clinton, or vote for a third-party candidate. If you’re considering voting for Donald Trump, and are cool with having your country run by an over-resourced toddler, you don’t need this article. For those of you who reject the idea of Trump as president, but are considering voting for Libertarian Gary Johnson, or Green Party Jill Stein, here’s a list of pros and cons of voting for a third-party candidate instead of Hillary Clinton this November.

Con: You won't get to vote for a winning candidate. Call me cynical, but recent polls compiled by Real Clear Politics show Libertarian Johnson polling at 7.2 percent, and Green Party Stein at only 3.0 percent. Though this is pretty cool, I'm going to side with Micah L. Sify of The New York Times who suggests the most either candidate could ever really hope to achieve in their wildest dreams right now would be their third-party ticket coming in second (his actual words were, “it’s not inconceivable,” that Johnson could come in second).

Pro: You get to beat a dead horse! Bernie and our tireless support for him pretty much already accomplished a major goal of most third-party campaigns, which is to advance their agenda on the national stage. Remember last night, when Hillary said, “I’ve heard you”? At this point, voting for a third-party could kind of be like bludgeoning a wild pony, so — pro, if you’re into that.

Con: Your future will be more likely to include the following: discrimination, deportation, war, surviving solely on second-rate mail-order steaks for the foreseeable future. Says Paul Richardson of The Huffington Post, “Clinton’s share of the vote almost always drops in polls where third parties are included.” Meaning? Your vote for a third-party candidate instead of Hill helps Donald Trump become president.

Pro: You can fall asleep at night knowing that you did not personally support a candidate who has low-key slut shamed, helped negotiate the Trans-Pacific Partnership, took millions of dollars in speaking fees from Goldman Sachs and whose charitable foundation's embroilment with foreign governments could possibly represent the definition of corruption.

Con: For real, your vote for a third-party candidate helps Donald Trump become president. Even though most predictions show Hillary currently has a higher chance of winning the presidency than Trump, if we've learned anything from #Brexit, it’s that basing your vote on assumptions isn’t the healthiest move — right, “guy from Britain who didn’t vote because he thought it wouldn’t matter”? I’d stick to the time tested logic, less votes for Candidate A = GOOD for Candidate B, as Trump might explain it.

Pro: Justin Trudeau will welcome you with open arms when you flee to his homeland. The Canadian border will be more open than you could expect America’s to be anytime soon — maybe you’ll get really into hockey, or learn French! The silver linings abound.

Pro/Con: You might tick off Seth Meyers. Meyers said on his show last week in his très fun segment, “Hey!”, “We are on the cusp of electing a racist demagogue. ... We don’t have time for this!”

Con: You may have to buy one of those red “Make America Great Again” hats to avoid hypocrisy. Alternate pro: The low brim of the hat may help you avoid meeting the direct gaze of people who formerly trusted you.

Pro: Sarah Silverman could have been talking directly to you when she said, “Bernie or bust people, you’re being ridiculous!” You get your own celeb call-out!

Pro: You can tell your grandchildren with pride that you did not vote for Donald Trump in the infamous “S***storm of 2016,” then when they ask if their grandma voted for the first female nominee in U.S. history, you can look down in sadness. Way to be the fun grandma!

More like this
Michigan’s Governor Is “Going To Fight Like Hell” To Protect Abortion Access
By Andrea Zelinski
How To Fight For Reproductive Rights, Based On How Much Time You Have
By Courtney Young
LGBT+ Men Fleeing Afghanistan Were Denied Asylum By The Home Office, New Findings Show
By Sam Ramsden
What Does Doctor Strange’s Third Eye Mean?
By Arya Roshanian
Get Even More From Bustle — Sign Up For The Newsletter