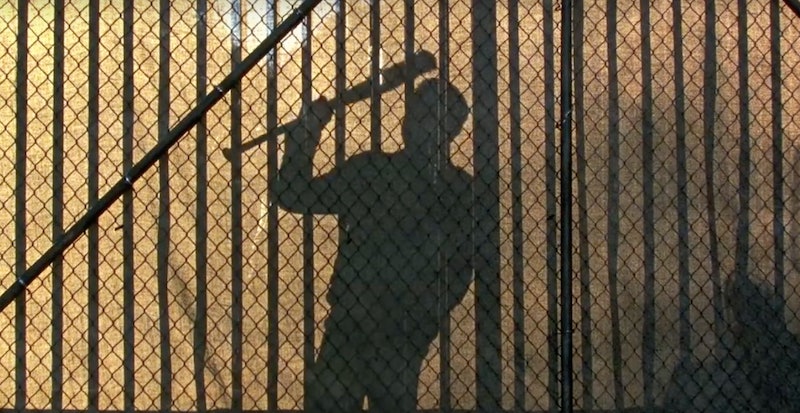 I can't think of a season premiere that is awaited with more bated breath from a fandom than The Walking Dead. The build-up to the Season 7 premiere has been so intense, in part thanks to the fact that cast and crew straight-up refuse to reveal any details about the Season 6 finale (in fact, some of the cast and crew don't even know the spoilers themselves). While the premiere is still a few months away, the heart-stopping Walking Dead Season 7 trailer gave us fans just enough to chew on to keep us occupied for a while. Aside from seeing a plethora of new faces in the trailer, the one big question one everyone's minds (who is Negan going to introduce to Lucille, his barbed-wire bat?) came equipped with little to no new answers. So, what's an avid Walking Dead fan to do when they still don't know who Negan will be killing?

That's where the sleuthing comes in. Newly released images from Entertainment Weekly show only two familiar faces (Morgan and Carol) in the lineup. It's always nice to see Carol making it through another harrowing season, but that still doesn't answer our question. Rick is the only cast member that is concretely confirmed to not perish in the death line-up, so there is a ray of sunshine. Similarly, Lauren Cohan (who plays Maggie) recently gave an interview at Comic Con wherein she detailed the importance of Maggie and Maggie's pregnancy within the Walking Dead world.

These may be pithy clues to some, but there is some rather ripe low-hanging fruit for the plucking if you look hard enough. When combined with the knowledge that the Walking Dead creators have maintained that Negan's victim will be a major, devastating reveal and the logical options are assessed, I think the core group of victims actually becomes a bit clearer. Here are my biggest votes for who will be meeting their maker in the Season 7 premiere.

Glenn is perhaps the classic and obvious choice here. He is Negan's victim in the comic book version of The Walking Dead, so it may go that the show will follow what is already canon. Offing Glenn might also add to the profoundness of Cohan's statements about Maggie's development in Season 7. As a single mother in an zombie apocalypse, Maggie's grief over the death of her beloved would add serious weight to her role.

The announcement of Danai Gurira's role in the new Black Panther film was definitely exciting. But, from a real world perspective, Gurira's new role could affect her involvement in Season 7 of The Walking Dead. She's been with us for ages, but perhaps Gurira's Panther role signals her untimely exit from her star-making role as Michonne.

Ugh, Carl. Carl's kind of like the cilantro of The Walking Dead: You've either loved or loathed him from the first time you laid eyes on him. While the zombie apocalypse has forced Carl to mature in ways no average child should be forced to mature, Negan got really close and personal with him in the Season 6 finale. Could Carl become a martyr, thus serving as Rick's impetus to go full-on into an inevitable war with Negan?

This may be a bit more far-fetched, since Aaron is a more recent addition to the Walking Dead squad. Aaron has always been a lovable, good-natured guy. As such, the sympathy we viewers have for him are at very high levels as we go into the Season 7 premiere. He's just visible enough that his loss would be a blow but just low-key enough that we wouldn't mourn him as much as we might mourn other characters (sorry, Aaron. It's true).

This could be the toughest loss to swallow if it's true. Daryl's evolution on Walking Dead has been so enthralling. Initially pitted as the enemy/problem child to Rick's good guy/alpha male status, Daryl has suffered loss and pain as much as the next person. The loss of Daryl would be incredibly devastating and would also serve as an emotional blow to his community, especially Carol. Rumors of Norman Reedus, who plays Daryl, exploring other ventures outside of acting have also surfaced, leaving us to wonder whether Daryl may in fact exit for good, regardless of whether it's at the hands of Negan or not.

No matter which way the barbed-wire bat falls, I'm going to be on pins and needles until the season premiere of The Walking Dead. There's no easy choice to make when it comes to eliminating a character from the series, that's for sure. Who will Negan really kill? We'll have to wait until October 23 to find out.