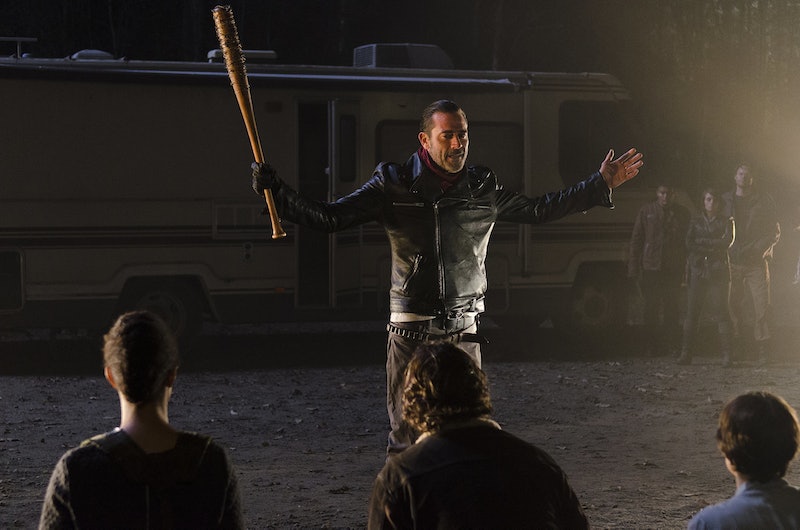 Sorry, The Walking Dead fans, but you have been asking the wrong question about the Season 6 finale. Instead of wondering who Negan killed, you should be asking who didn't he kill? The answer is Negan killed everyone... at least he did according to The Hollywood Reporter.

A source told THR, The Walking Dead went to epic lengths to keep the answer to the cliffhanger Season 6 ending under wraps. Instead of filming Negan taking his beloved bat Lucille to one character, the show reportedly filmed Negan killing each of the 11 characters in the scene to confuse the spoiler hungry masses trying to get an early preview of who Negan's ultimate victim will be. That means that, somewhere out there, there is footage of Glenn, Maggie, Daryl, Rick, Abraham, Carl, Michonne, Rosita, Sasha, Aaron, and Eugene all being murdered by Negan. Yeah, The Walking Dead went there.

When it comes to preserving the sanctity of the season ending cliffhanger, The Walking Dead is the reigning champ. Imagine for a moment how much work must have went into filming 11 death scenes. The makeup, the emotional toil on the actors and crew, and the time — after all the work put into preserving the mystery, this is one cliffhanger that needs to payoff big time come October.

Now that the world knows there is an excellent chance The Walking Dead filmed at least one death scene for each of your favorite characters, figuring out which actor is out of a job is going to be next to impossible. Sure, series creator Robert Kirkman has promised the character who gets up close and personal with Lucille is "beloved," but that does not narrow the list down when you consider the "beloved" moniker could be placed on any one of the 11 characters in the scene.

Abraham, Rosita, Sasha, and Aaron may not have the fan following of Michonne and Daryl, but part of the audiences likely adores them. Since Negan was clear he was trying to prove a point to Rick that he is in charge now, Rick definitely seems safe, as does Carl since Negan threatened to take out his eye if Rick said another word. Everyone else is fair game at this point.

The real feat here is The Walking Dead managed to pull off filming 11 death scenes without anyone outside the cast finding out about it until now. The news certainly sheds light on star Andrew Lincoln telling Variety shooting the finale made him feel physically ill. Depending on when the scenes were shot, Lincoln could have been referring to the two days spent filming the final sequence in the woods, including Negan's big speech.

If you are looking for a lesson in this madness, it is do not underestimate The Walking Dead writers. They want Negan's victim to be shocking, and they have put a lot of work into preserving the secret. The cliffhanger ending may have been maddening, but you have to give the show major props for (temporarily) killing off all of the show's major characters just to ensure Season 7 starts with a bang — well, make that a bat.

More like this
Who Could Die In The Stranger Things Season 4 Finale?
By Kadin Burnett
Regé-Jean Page Spoke Out On His Rumoured 'Bridgerton' Return
By El Hunt and Maxine Harrison
'Stranger Things' Season 4 Volume 2 Trailer Teases New Episodes Coming July 1
By Grace Wehniainen and Gabrielle Bondi
The 'Ms. Marvel' Review Bombing Controversy, Explained
By Radhika Menon
Get Even More From Bustle — Sign Up For The Newsletter