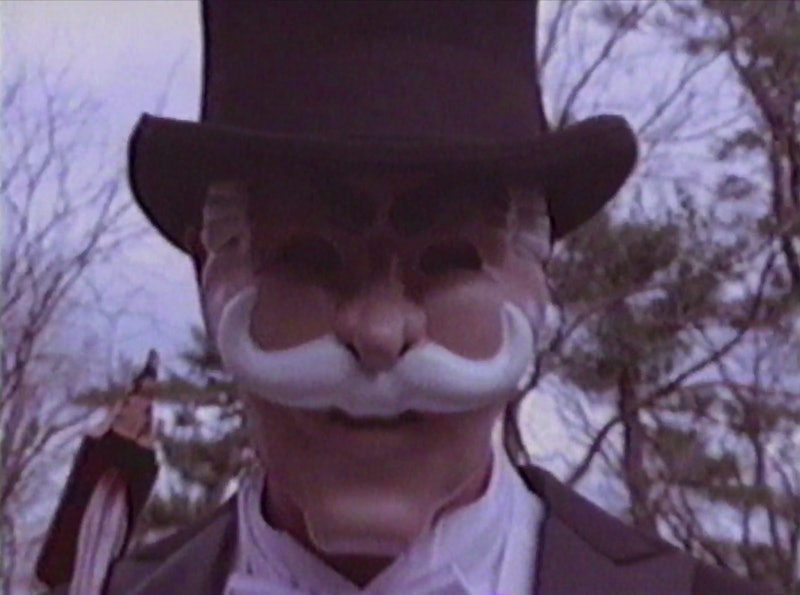 On Wednesday's episode of Mr. Robot, we finally found out the origins of fsociety's iconic masks: a fictional '80s horror movie that Elliot and Darlene loved, The Careful Massacre Of The Bourgeoisie . It's a case of so far, so meta — until the gang behind Mr. Robot actually made a short film that is basically a clip of the fictional movie. It's great, of course, and proof that the show is so dedicated to ensuring your addiction to the show extends long beyond viewing night.

The clip depicts two very rich, very privileged siblings as they snort cocaine, bicker about their upcoming New Year's Eve party, and discuss their mysterious, deceased Uncle Conrad, who killed himself following a family business dispute. Apparently, he used to wear a creepy mask around — the same one that the rich brother is now insisting on wearing, much to his sister's discomfort. Then, considering this is a horror movie, things get horrifying: A mysterious killer puts on the mask and sets to work doing what serial killers do best. Of course, since this is a short and not an actual horror film, it's a little too camp to be truly terrifying (see: the scene where, in true '80s horror movie style, one of the fleeing girls gets her top snatched off by the murderer), but it's still great.

Also, I have to point out: Nothing on Mr Robot is done for our pure entertainment. As fun as the clip is to watch (and you can see it here!), we've got to ask ourselves what clues we can derive from the short.

1. Look Who The Production Company Is...

Nope, those deliciously '80s VHS graphics weren't just there for nostalgic feels. You might have missed this, but right at the opening, we see the company behind this horror masterpiece is none other than E Corp, aka the company that owns most of the credit industry in America and who were behind the gas leak that killed Elliott's dad. This opening presumably emphasizes how we're supposed to be interpreting the film: It has a clear connection to the world of Mr. Robot.

2. Is This Why The Fsociety Has The Masks It Does?

3. Is There A Connection To An Existing Movie?

The 1972 Luis Buñuel surrealist film has an eerily similar title: The Discreet Charm Of The Bourgeoisie. In the movie, a group of upper-class friends attempt to enjoy a meal together. However, Buñuel constantly subjects them to interruptions and disappointments, whether a restaurant being closed or its manager having passed away shortly beforehand. Still, this doesn't deter the group from pursuing their pleasure in a way that exposes their assumption that other people should wait on them and they should enjoy luxury and exposes their hypocrisy. In one of the most famous scenes, they throw out a bishop in gardener's clothes but bow and scrape to him when he returns properly attired. Mr. Robot has a similar class preoccupation and I would argue this isn't so much a clue about where the show is headed as it is about its priorities in terms of themes that dominate.

4. Even The Static At The End Could Be Significant

If you're wondering if the static concealed anything, check out Reddit user who_is_mrx's slowed down version on Imgur. Personally, I don't see anything, but maybe someone who is more Internet-savvy than I can spot something?

While it's honestly not totally clear what any of these hints mean, with Mr. Robot, the significance of events tend to unfold an episode at a time. So bookmark this page and check back after next week's episode to see if it has shed any further light on the clues planted here.