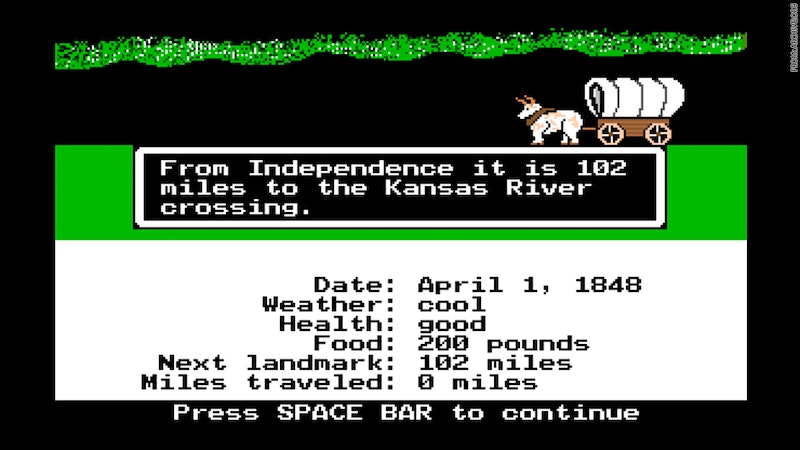 There is a single reason why I know that Chimney Rock, Fort Laramie, and Fort Walla Walla were stops for pioneers making their way out West, and that reason is the Oregon Trail computer game. (It is also the reason why I have an irrational fear of dying of dysentery, despite the fact that dying of dysentery is pretty rare these days.) Now, though, I don't even have to have a computer to ford rivers and shoot deer, because — joy of joys — there's a new Oregon Trail card game!

Oregon Trail made its first appearance in 1971, which was not, incidentally, a year that I thought you could play actual games on an actual computer. (Hey, I'm a '90s kid, so Myst is retro to me.) It's had plenty of iterations since then, but the setup has always been the same: you play as a pioneer traveling to the West Coast in a covered wagon during the mid-1800s. The goal? Don't die. That's it. It's harder than it sounds, though, since you can die of exhaustion, cholera, typhoid, drowning, snakebite, measles, a broken leg or arm (???), and, of course, dysentery.

But if you make it all the way to the end, you get to live an idyllic farmer's life in fertile Oregon. Although I'm pretty sure that Oregonian farmers still had issues, even after they survived the Oregon Trail, but what do I know? I always died of dysentery before I could finish.

Anyway, the card game is a Target exclusive, and it's available July 31. As long as you have $14.99, you can be the proud owner of the latest in a long line of Oregon Trail games. Nobody knows too much about the gameplay at present, since few of us have had the opportunity to get our hands on the card decks, but fear not, there is an instructional video!

In the video, Jeff Pinsker, the president of Pressman Toy Company, says, "We've done our best to build in all sorts of gruesome, 19th-century ways for you, your friends, and your family to die along the trail!" My word. With that sort of intro, perhaps the game is closer to Organ Trail, a 2013 zombie survival game based on the mechanics of Oregon Trail...

In any case, you can still relive the classic 1985 version by playing it online. Happy pioneering, and remember to buy enough bullets for your entire trip. Skimping on bullets is a rookie mistake, friend.