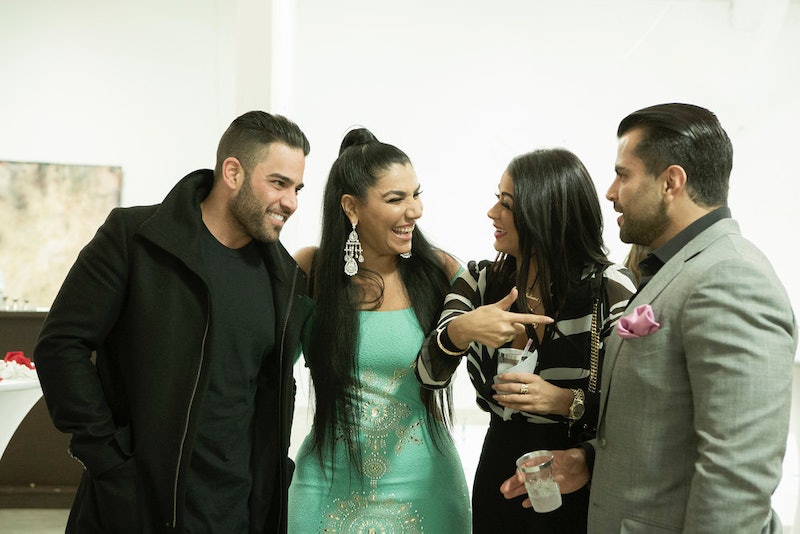 With the fifth season finally airing its last reunion episode and wrapping things up, fans like me need to know if Shahs of Sunset will return for Season 6. Unfortunately, Bravo has not yet announced whether there will be another season, but that isn't reason to worry. If Shahs of Sunset does return, it likely wouldn't be for a while, so the network still has plenty of time to renew it. In fact, over a year passed between Seasons 3 and 4, and after that, we were left waiting for Season 5 for about 10 months. If the show continues with those long breaks between seasons, we shouldn't worry about no news being bad news until next summer. And right now, we have reason to be optimistic.

The fifth season's ratings were on par with Shahs of Sunset's Season 4 ratings, which were clearly high enough to warrant a renewal. But more importantly, Shahs has been really, really good this year. After adding a bunch of new cast members in previous seasons, the fifth cut it back down to strictly the originals. In doing so, it got back to what made Shahs of Sunset so addictive in its first season: making viewers feel like we're eavesdropping on a group of actual friends who just so happen to be living wildly dramatic lives. For example, watching Mike's marriage dissolve over the course of the season was so intimate it was almost uncomfortable, even though it also felt inevitable given what we'd seen in the past. And even though GG's behavior continued to spiral downward, her friends rallied around her to give her both tough love and support. Though things got heated many times, it always felt like a slightly exaggerated version of what real friends actually go through as relationships change over time.

Not only has the show improved in Season 5, it's also brought up a bunch of questions that I'm desperate to see answered in another season.

Will MJ Get Married?

She got a proposal that was perfect for her slightly sloppy yet weirdly endearing relationship with Tommy, but that doesn't mean she'll make it down the aisle right away. I would be thrilled to see MJ wedding planning for a while next season. You know what? Make that two seasons. You know her dog is going to be the ring bearer, Reza will be the maid of honor, and Asa's mom will wind up getting roped into doing the catering.

Will Vida Finally Accept It?

MJ's mom was very unhappy about her daughter getting engaged (after haranguing her for the past five seasons that she should get married, but OK). This mother/daughter duo have clashed over a lot in the past, but never on something as serious as this. Hopefully, Vida will support her daughter in the end.

How Will Mike Handle His Breakup With Jessica?

People often wonder if reality TV is fake, but Mike's emotions over the end of his marriage are clearly real. That was also reiterated in Mike's recent interview with People, in which he confirmed that he really did cheat on Jessica and described how difficult it has been to watch the end of their relationship again on Shahs of Sunset. He told the magazine, "t's like going to sleep every night and having the same nightmare every night – and knowing tonight when I go to sleep again I'm going to have the same nightmare." But he later said that he and Jessica still have "this underlying love ... for one another," so hopefully, a sixth season of Shahs would find them in a good place as exes.

How Are Reza & Adam Dealing With Married Life?

Adam wants kids, but in the finale, Reza said that he wants to be like Hart to Hart, and those two visions aren't exactly compatible. I think Reza will wind up liking the domestic life, since he really seems to love Adam, but Shahs of Sunset always manages to wring lots of drama out of his life choices.

Asa is hands down my favorite member of the cast, because her practical, rational personality contrasts so dramatically with her career being so all over the place. I think at this point she's attempted at least a dozen career paths, and I can't wait to see what the next dozen are. Will any be as ridiculous as Diamond Water?

What's Next For GG?

On a more serious note, GG's Season 5 journey showed just how much she needs support, both with her health issues and relationship with the group. Reza's stunt may not have been nice, but it did point out that GG has gotten very angry and fought a lot with this cast, but they've still attempted to preserve their friendships. GG hasn't posted a new picture with any cast members in a while, but hopefully filming Shahs of Sunset Season 6 for Bravo would bring this crazy group together again.

More like this
Here’s When 'Love Is Blind: After The Altar' Was Filmed, Because It’s Hard To Keep Track
By Grace Wehniainen
You Can “Fall In Love” At The Resort Where Bachelor In Paradise Season 8 Was Filmed
By Brad Witter
The 'Bachelor In Paradise' Schedule Shifts To 4 Hours Every Week After The Season 8 Premiere
By Brad Witter
Molly-Mae Hague & Tommy Fury Celebrate Pregnancy Reveal In The Sweetest Way
By Sophie McEvoy and Sam Ramsden
Get Even More From Bustle — Sign Up For The Newsletter