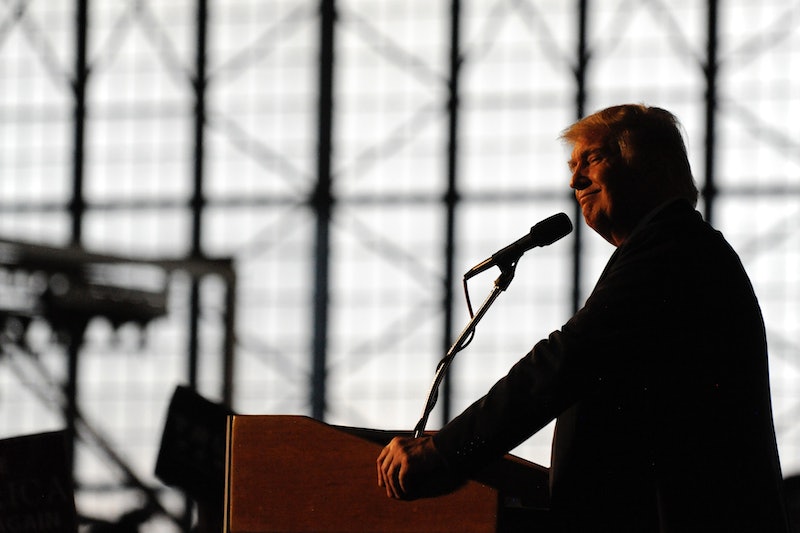 Donald Trump and Khizr Khan have had a tumultuous few days. On Thursday, Khan, the father of a deceased U.S. Army captain, spoke at the Democratic National Convention (DNC), where he criticized Trump for not understanding the Constitution or the religion of Islam. Trump fired back, as he does, but social media appears to be on Khan's side, as this meme of the Trump-Khan drama points out the fundamental issue that we should all keep in mind.

It all started when Khan referenced Trump in his speech to the DNC. The Pakistani-American appeared on stage with his wife, Ghazala, to honor the memory of their son, Humayun, who was killed by a car bomb during a deployment to Iraq 12 years ago. Khan was also there to support Democratic nominee Hillary Clinton — and that came with some expected Trump-bashing:

Donald Trump, you are asking Americans to trust you with our future. Let me ask you: Have you even read the U.S. Constitution? I will gladly lend you my copy. In this document, look for the words "liberty" and "equal protection of law."

Trump responded by saying in a statement that Khan had "no right to stand in front of millions of people and claim I have never read the Constitution." He also speculated that Ghazala didn't speak on stage because she wasn't allowed to — but that's a story for another time. As all Americans should know and remember, Khan obviously did have a right to speak his mind at the DNC.

That's the ultimate irony for Trump: The Constitution gives Khan the very right that Trump claims he doesn't have. Sure, Trump might not have meant in his statement that Khan literally did not have a right to say what he did; the phrase has become somewhat of a colloquialism in the U.S. Still, that doesn't make the meme any less poignant.

Elsewhere on social media, Trump's critics found humor in another one of Trump's responses to the Khan family. In an interview with ABC that aired on Sunday, Trump said, "I think I've made a lot of sacrifices. I work very, very hard." (Khan's DNC speech claimed that Trump had made no sacrifices for his country.) In response to Trump's assertion that he has sacrificed plenty, #TrumpSacrifices trended on social media on Sunday.

Although the DNC wrapped up on Thursday, the drama between Trump and the Khan family hasn't fizzled out. But, hey, at least we're talking about the Constitution now, and not the size of his hands.