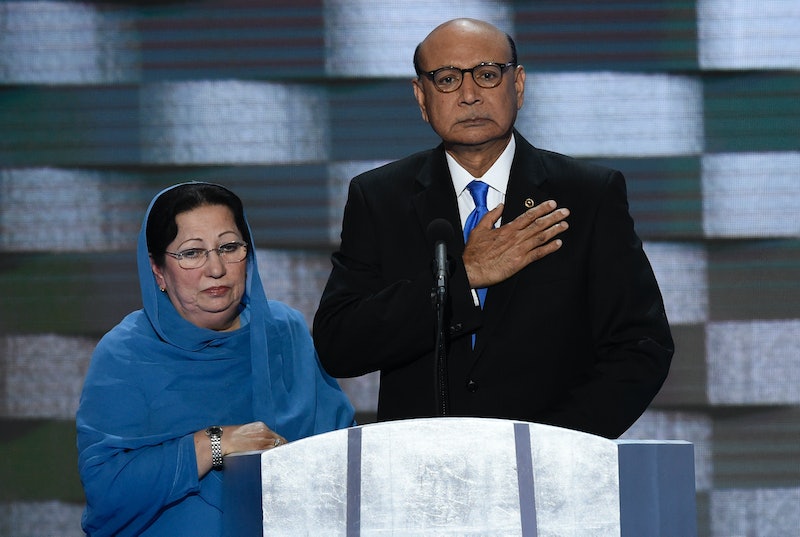 The final day of the Democratic National Convention saw one of the week's most powerful speeches by a man whose name you may not have known until now. His message, however, is one you need to remember. On Thursday evening, the transcript of Khizr Khan's DNC speech targeted Donald Trump in one of the most poignant ways the nation has seen thus far. Khan is a Muslim American whose son, Capt. Humayun Khan, grew up in the United States and later joined the military. Ultimately, he gave up his life for his country. Khan's testament put Trump's depiction of Muslims to shame. If Trump was president and had implemented a law banning Muslims from entering the country, Khan explained, his patriotic son may not have been able to put himself in the line of duty.

Khan's son wasn't the only Muslim American to be killed in action during the Iraq War; he was among 13 other soldiers in total. Clinton has spoken about Humayun in the past to draw contrast between her campaign and that of Trump. In December at an event in Minneapolis she paid tribute to the fallen soldier during a discussion on national security. Before Humayun's father took the DNC stage on Thursday, a video of Clinton's speech from December was shown on stage as a part of an introduction video.

Tonight we are honored to stand here as parents of Captain Humayun Khan and as patriotic American Muslims — with undivided loyalty to our country.

Like many immigrants, we came to this country empty-handed. We believed in American democracy — that with hard work and the goodness of this country, we could share in and contribute to its blessings.

We were blessed to raise our three sons in a nation where they were free to be themselves and follow their dreams.

Our son, Humayun, had dreams of being a military lawyer. But he put those dreams aside the day he sacrificed his life to save his fellow soldiers. Hillary Clinton was right when she called my son "the best of America."

If it was up to Donald Trump, he never would have been in America. Donald Trump consistently smears the character of Muslims. He disrespects other minorities, women, judges, even his own party leadership.

He vows to build walls and ban us from this country. Donald Trump, you are asking Americans to trust you with our future.

Let me ask you: Have you even read the U.S. Constitution? I will gladly lend you my copy. In this document, look for the words "liberty" and "equal protection of law."

Have you ever been to Arlington Cemetery? Go look at the graves of the brave patriots who died defending America.

You will see all faiths, genders, and ethnicities. You have sacrificed nothing and no one.

We cannot solve our problems by building walls, sowing division. We are stronger together. And we will keep getting stronger when Hillary Clinton becomes our President.

In conclusion, I ask every patriot American, all Muslim immigrants, and all immigrants to not take this election lightly.

This is a historic election, and I request to honor the sacrifice of my son — and on election day, take the time to get out and vote.

And vote for the healer. Vote for the strongest, most qualified candidate, Hillary Clinton, not the divider. God bless you, thank you.

And according to WIRED social media editor Nate Goldman, Google searches for "register to vote" increased substantially right as Khan's speech ended. His story is moving people to take action.