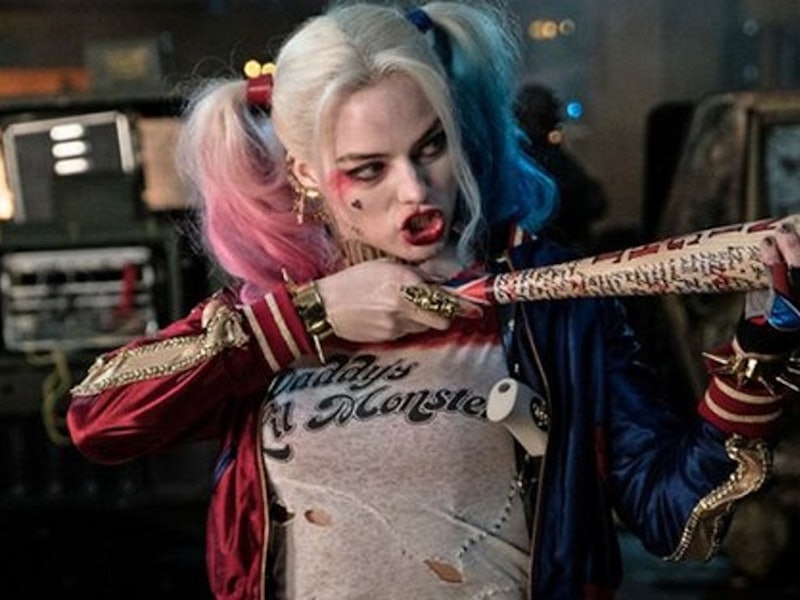 Have you bought your tickets for Suicide Squad yet? If not, you really should. Not only has DC made a wickedly fun film, but they made one featuring plenty of amazing female characters. Harley Quinn and Amanda Waller, for instance, are two butt-kicking women from totally different universes, but both play major roles in the new film. Harley is a criminal genius with an unpredictable personality that can quickly turn violent, while Amanda is a powerful official who controls everything from a distance. During the Suicide Squad press conference in New York on Sunday, Margot Robbie (aka Harley), Viola Davis (aka Amanda), and director David Ayer discussed what went into crafting Harley and Amanda's complex characters.

"I tapped into Viola at 8," Davis said at the conference. "I can’t tap into Viola at 51, but at 8, I could beat somebody’s ass. I just was always angry, because people were always teasing me, I was bullied. And I remember that was the first story that I told David when I met him. He was like, "Oh yeah, Viola just tell me about your childhood," and I said, 'Well David, I remember when I was 8 years old, I kicked a lot of ass.'"

While Robbie's Harley has been a focal point in all of Suicide Squad 's advertisements, you may not have realized Davis would also be bringing an integral character to life in the movie. As Amanda Waller, Davis has to be an opposing figure. She is the woman behind the curtain, the one pulling all the strings, and who is just as scary as the criminals whose talents she harnesses to create a team of antiheroes. For Davis, finding her inner toughness meant getting in touch with a younger version of herself, and clearly, it worked.

By channeling her past, Davis found a way to tap into the strength and danger Amanda exudes. For the actor, crafting her performance as Amanda was all about putting away her own fears and shyness. She revealed she had to bury her desire to retreat or apologize, an impulse Davis knows many women have to fight against. "She is unapologetically brutal… but I had to tap into that because otherwise, I would’ve retreated, and with this group, I couldn’t retreat," Davis said of Amanda. "So that’s what I did."

Robbie had an equally difficult task in front of her, thanks to the iconic status of Harley Quinn. The Joker's one time paramour and protege is a fan favorite who has rarely been brought to life on the big screen. Robbie was conscious of how important it was to get Harley right, and she turned to the Internet to research schizophrenia by watching TED Talks. However, Robbie wanted to understand all of Harley, so she made sure she didn't ignore the character's smarts. "The women who were doing these talks were so intelligent, they were professors, and Harley needs to be wickedly intelligent but also kind of psychotic, so I found that so helpful," Robbie said.

As for why Harley and Amanda were written with so much confidence and power in the first place, director Ayer had a simple, but perfect answer: he's a father of two girls and he wants to make sure they have characters to look up to. "I think what happens in film a lot is the male voices, and by voice I mean character, the depth of the character, the performance of the characters… are incredibly developed, and often, the women are underdeveloped," Ayer explained. "But in this case, I wanted the women who had voices, and had power,and were powerful as women, and as the father of two daughters, I think it’s important to give them examples that if you can’t speak up in the world, you can’t have what you want."

Ayer clearly did his job well, because I don't think anyone would dare tell Harley or Amanda they cannot have whatever their hearts desire.