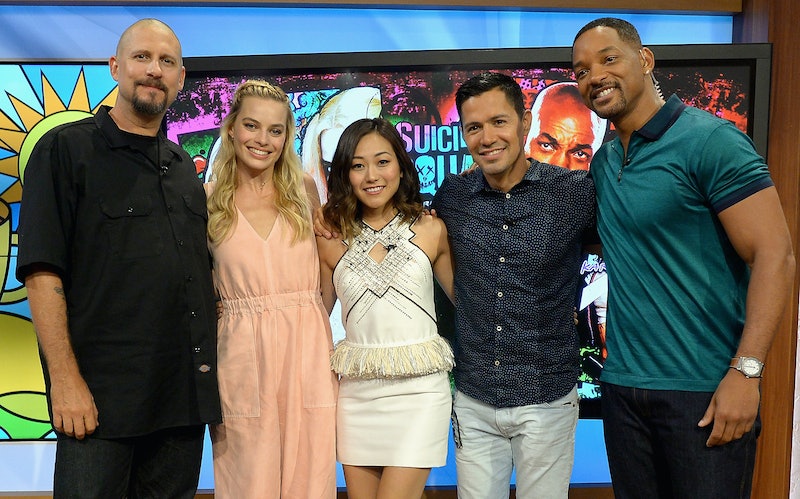 The past few years have, rightfully, been dominated by headlines about the lack of diversity in things like Oscar nominations and the whitewashing that goes on in Hollywood films and TV shows. With the current push for movies and TV to include more non-white actors, Suicide Squad director David Ayer told reporters in a NYC press conference on Sunday that he's proud that Suicide Squad features diversity in the superhero genre. The upcoming DC Comics-based flick opens on Aug. 5 and stars Will Smith, Jared Leto, Viola Davis, Jay Hernandez, Margot Robbie, Adewale_Akinnuoye-Agbaje, and Karen Fukuhara — a cast that boasts far more people of color than most recent superhero movies.

And there's good reason for that, said Ayer at the conference. He said that he prominently featured diverse actors in Suicide Squad because he wants today's children — including his own — to see the world as it reflected on the movie screen. "I grew up in South LA, I grew up in a really diverse neighborhood," Ayer said. "I was the only white boy, that’s how diverse it was. And it’s the world I know, it’s the world I live in, but it’s also the world we all live in, and I feel like on-screen, kids need to see people that look like them."

Damn straight. Ayer is clearly passionate about this issue, as it's something he'd made an effort to prioritize in much of his work. Before Suicide Squad, he wrote the 2004 drama Training Day, for which Denzel Washington won his second Oscar, as well as the original The Fast and the Furious movie, which featured a diverse cast. As a writer and director, Ayer helmed Harsh Times (starring Freddy Rodriguez and Eva Longoria) and End of Watch (starring Michael Peña, Natalie Martinez, and America Ferrera). On stage at San Diego Comic Con last week, Ayer sported a trucker hat that read "Make Mexico Great Again," according to the New York Times.

It's clear that Ayer's roots in South LA — as well the make-up of his own family — have influenced why including diversity is important to him. "My wife is Latino, my kids are Latino, and it’s important for them to see faces like theirs on the screen," he says. "And this is also a global business these days, and we need to evolve with the times. It comes naturally to me, but I think that’s making diversity a strength, we need to be a lot more inclusive in film, we really need to work on that. And in our world in general." Amen.

More like this
Everything You Need To Know About The 'Knives Out' Sequel
By Grace Wehniainen
What Does The Presley Family Think Of 'Elvis'?
By Arya Roshanian
Dakota Johnson Reveals Why Filming Fifty Shades Was “A Battle”
By Rachel Mantock
The Tragic Reason Elvis Never Toured The UK
By Sam Ramsden
Get Even More From Bustle — Sign Up For The Newsletter