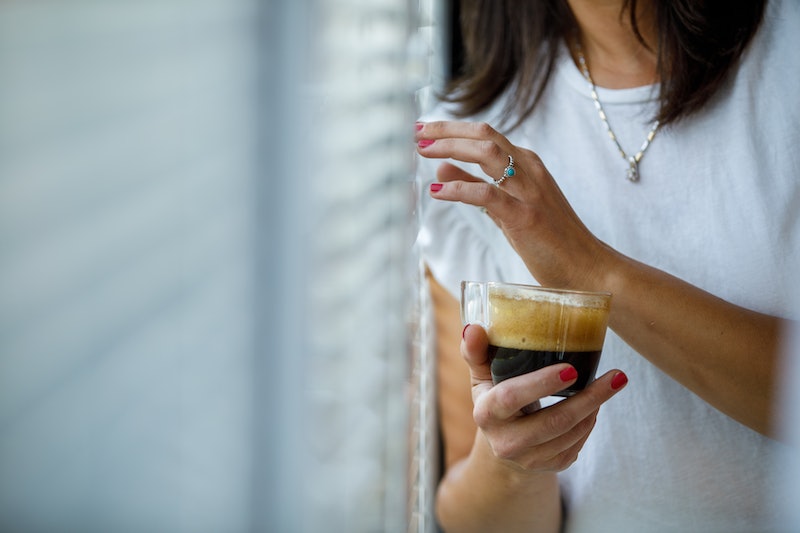 To cut to the chase — I'm a woman who doesn't want kids and I'm far from the only one who feels that way. In fact, the U.S. Census Bureau recently concluded that in 2014, nearly half of women between the ages of 15 and 44 did not have kids — the highest percentage since the Census Bureau began tracking this statistic in 1976. Whether or not I choose to have kids is really no one's business, but that doesn't stop people from constantly questioning my decision, expressing shock that I don't feel obligated to have a kid just because I have a vagina, and asking lots of invasive questions.

The reason most of the questions and statements that people launch at you regarding your choice to not have kids aren't OK (regardless of how well-intentioned they may be) is because the people asking them often seem to assume that they know us better than we know ourselves, and it comes across as demeaning and invalidating. The reasons that women don't want children vary, and I certainly can't speak for all of us. Personally, I love kids but I just don't see myself as being an amazing mom. And I don't want to bring a child into this world solely because other people think it's weird if I don't. But, regardless of our reasons, most of us are sick of getting some awfully similar comments about them — so here are eight things most women who don't want kids are tired of hearing.

It's demeaning and completely invalidating to tell a woman that she'll change her mind. It sends the message that we don't know ourselves and that when we become wiser, something will click and we'll suddenly have the desire to have a baby. Some women do change their minds for various reasons, which is more than OK — but many of us don't, so please don't invalidate this as an immature "phase" that will pass.

Again, people need to stop assuming that they know us better than we know ourselves. You know what I would seriously regret? Bringing a child into this world when I wasn't 100 percent sure it was what I wanted. As a result of that lack of certainty, I may not be such an amazing mother — and every child deserves parents who are absolutely committed to parenting and made a conscious decision to become parents.

Perhaps — but we're not obligated to do something simply because we may be good at it. I get this one a lot because I'm a doting aunt and I do a lot of volunteer work with children — I really love kids, but that doesn't automatically mean I'm meant to be a mother. There are many ways to influence kids' lives without being a parent — such as volunteering with underprivileged children and mentoring nieces, nephews, and our friends' children.

Everyone in the world is aware that having children is life-changing. But it's not necessarily a change that we all want. Life changes are different for everyone — and not all of us view this major step as a positive change we want or need.

5. "When You Meet The Right Person, It'll Change Your Mind"

Uh, nope. I have plenty of partnered friends who discussed whether or not they wanted children before making a commitment. It's simply not the right match if one person feels strongly about having children while the other definitely doesn't want kids. I know plenty of people who have found the perfect partner — and, miraculously, their relationships have thrived despite the fact that they chose to not have children. Instead, their bonds are strong because they share similar passions and have the freedom to spend a lot of time with just each other.

Nope. You know what is selfish? Bringing a child into this world without feeling 100 percent committed to being an amazing mom. This also feeds into the overall ideology that women are selfish if they choose to passionately pursue their career, travel extensively, and spend a lot of time with friends, family, and significant others. Like many childless women I know, I have the free time and flexibility to volunteer for multiple organizations and be there for my friends and family. It's insulting to basically be told that we're selfish for not having kids. Trust me, we give back in other ways that are a good fit for us.

7. "It's The Most Fulfilling Experience You'll Ever Have"

I know plenty of amazing, accomplished mothers (including my own) who do consider motherhood to be their greatest source of pride and fulfillment. These are people who are naturally maternal and chose to have children for all the right reasons. I couldn't possibly respect that more — and, in fact, my mom couldn't care less if I don't have kids because she raised me to follow my own path. That path doesn't happen to include motherhood, and she's fine with that.

But I have my own dreams and accomplishments to pursue — and they'll fulfill me just fine, thank you. Again, this is a very generalized statement that makes it sound as though our lives will be incomplete if we don't have kids — and it's an insult to women whose destiny doesn't include being a parent.

Now that I'm in my late 20s, I get this one a lot — especially because I'm happily single. To hear others tell it, women like me need to find the a partner STAT so we can marry, have kids immediately, and move into a house with a picket fence. What do people mean by "too late"? Too late to do something we never wanted in the first place?

There are many life paths, and I have tremendous respect for many mothers that I know. But I don't plan on becoming a mother. It's simply not something I want or would excel at. And I shouldn't be shamed for that.