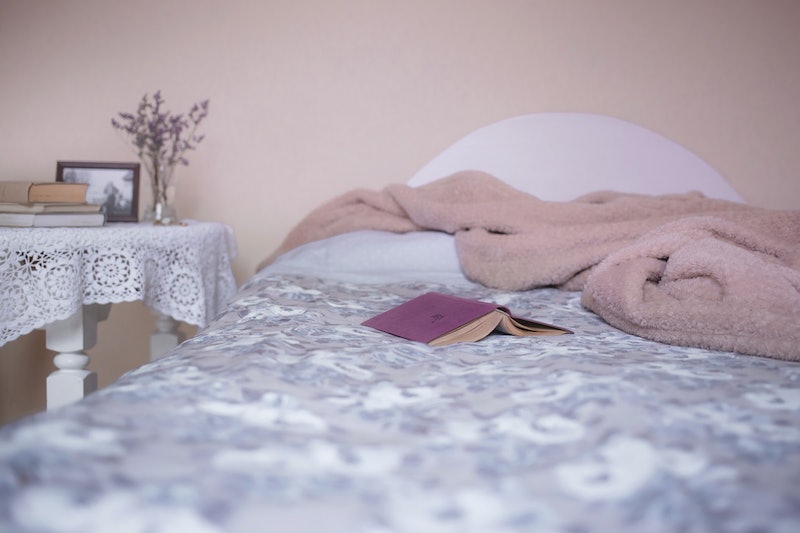 Plenty of people get around eight hours of sleep every night, but still feel consistently tired throughout the day. Needless to say, it's a frustrating and confusing experience — no one enjoys struggling to keep their eyes open, especially when they can't figure out why it's happening (and exhaustion often doesn't make us all that pleasant to be around). Sometimes, simply getting eight hours of sleep isn't enough — there are a number of possible reasons you're so tired all the time. They range from vitamin deficiencies to diet and exercise habits to underlying health problems that you may not be aware of.

If you're always tired, there are some quick lifestyle changes that may help, such as adjusting your diet or making exercise a part of your daily routine. But if those changes aren't effective, it may be time to see a doctor for some blood work and tests so you can get to the bottom of what's going on with your body. Your tiredness could be related to a vitamin deficiency, or it could be a symptom of a more serious illness.

The bottom line is that chronic exhaustion is seriously miserable — and the longer it goes on, the harder it can be to get through each day. Here are six potential reasons for your never-ending fatigue (and ways to fight them):

When we think of sleep problems, "insomnia" is typically the first one that jumps to mind. But there's another condition called semi-somnia that also causes fatigue, for different reasons. If you're suffering from semi-somnia, you're able to get some shut-eye, but your sleep patterns aren't restful. It's believed that the condition is related to a hectic lifestyle and spending too much time on electronics, for both work and pleasure. For people with semi-somnia, their brains remain active during the hours when they should be resting. So, they may spend eight hours in bed each night technically "sleeping," but wake up feeling exhausted because the quality of their sleep was so poor. Although semi-somnia is not as debilitating as insomnia itself, it can eventually escalate to insomnia.

There are a few ways to combat semi-somnia. Taking short breaks at work every two hours and unplugging completely during those times (yes, that means leaving your personal phone behind and staying off social media) can help. Try to turn off all your electrical gadgets at least one hour before going to sleep and don't read any emails or messages that have the potential to stress you out. Engage in hobbies and activities that have nothing to do with technology — get outside, take a yoga class, and leave your phone behind.

If you're constantly tired, the last thing you want to do at the end of the day is go to the gym. Luckily, it doesn't take a vigorous workout to improve your fatigue. According to The New York Times, research has shown that consistent, low-impact workouts can ultimately boost energy levels amongst the fatigued. In fact, a study showed that fatigued participants who engaged in low-intensity exercises reported a 65 percent drop in fatigue, while the group who performed intense exercises only experienced a 49 percent drop. The low-energy exercises used in the study were the equivalent of a slow, leisurely walk — so that's totally manageable and could help perk you up overall.

Your fatigue could also be related to vitamin deficiencies — so that's definitely worth looking into at your next doctor's appointment. Approximately 23 percent of adults in America have a magnesium deficiency — and magnesium plays a major role in over 300 metabolic reactions, one of which is energy production. The deficiency impairs the energy production pathway that's necessary to produce ATP (adenosine triphospate).

Other deficiencies to look into are Vitamin B (which is essential to converting food into energy) and antioxidants like Vitamins C and E, the mineral selenium, and the nutrient coenzyme Q10. Like Vitamin B, these antioxidants are key to mitochondria energy production.

If your fatigue is paired with physical symptoms such as muscle and joint pain, headaches, a constant sore throat, and memory issues, it could be a sign that you have a chronic illness that needs to be treated. If you have any of these symptoms (or other intense physical symptoms), talk to your doctor immediately about the possibility that you may have a serious health problem. Consistent fatigue can be a sign of many illnesses — including (but not limited to) anemia, chronic fatigue syndrome, depression, diabetes, thyroid problems, fibromyalgia, and multiple sclerosis.

Not eating frequently and having an unbalanced diet can lead to constant tiredness. Energy bars and drinks don't do the trick — we need to have a balanced diet to support our bodies and improve our physical and mental health. A diet that draws from the main food groups — starches, fruits and vegetables, dairy, and protein — is crucial to combatting long-term tiredness.

Eat frequently and don't skip meals, especially breakfast. Additionally, be sure to drink enough water — dehydration is a quick way to become exhausted. If you think your exhaustion may be related to your diet, make an appointment with a nutritionist and map out a healthy meal plan that fits your lifestyle and schedule.

A common side effect of some common prescription and over-the-counter drugs is fatigue. It can be caused by antidepressants, antihypertensives, steroids, antihistamines, sedatives, anxiety medications, and many others. If you're on a prescription medication, it may not instantly cause fatigue — sometimes that side effect develops over time. If you've been on a certain medication for a while, it's worth talking to your doctor about your exhaustion. There are often plenty of other options — for example, a common side effect of antidepressants is fatigue, but there are many different antidepressants out there, so working with your doctor may help you find a new med that won't leave you exhausted.

Exhaustion comprises both your physical and mental health — so don't try to simply "tough it out." There are many ways to combat the fatigue and get professional help if it's the result of an illness.