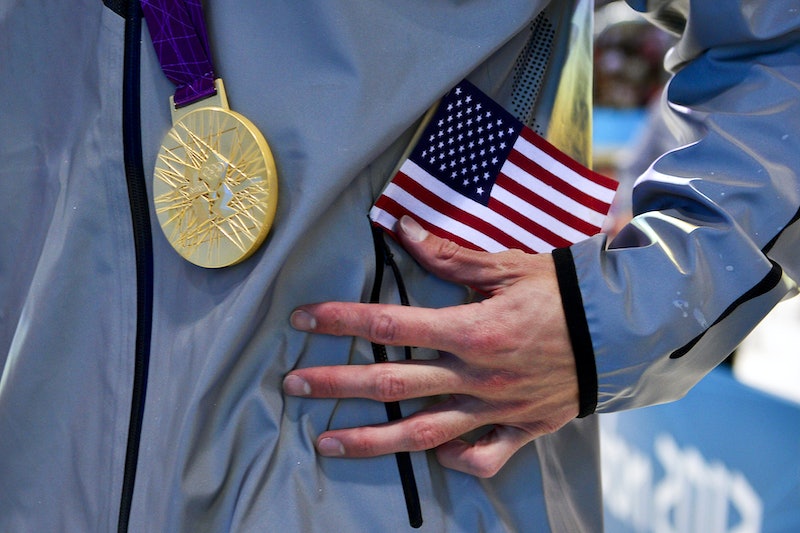 And we get to watch them as they happen. As spectators, watching the Games means witnessing history. It also means watching some of the hardest — and greatest — minutes of these athletes’ lives, as they put their years of grueling training to the test, all for one moment of Olympic glory. As we cheer on the athletes of our country, and of the world, we ourselves become part of the narrative, part of the emotion of the moment, as well as the triumph of winning the gold.

So, to get ready for the Olympic Games in Rio, which are starting in just a few short days, we’ve decided to take a look back to the top moments in recent Olympic history. Competitions that inspired and excited us. Monumental wins that made us get up off our seats as they happened. Events that, even as they happened, you knew you would remember for years to come.

As athletes, Olympians are constantly putting themselves at risk for injury — one false move at a practice can effectively end their Olympic dreams. But in 1984, gymnast Mary Lou Retton hurt her knee in one of the most unexpected ways possible: while signing autographs. Not one to give up, Retton underwent knee surgery, recuperated, and went on to compete in the 1984 games in Los Angeles. There, she became the first female gymnast from outside Eastern Europe to win the Olympic all-around title. She also won several other medals (two silver and two bronze), just for good measure.

If you thought competing in the Olympic Games in top form was hard enough, imagine doing it with a head injury.

At the 1988 Seoul Olympic Games, American diver Greg Louganis hit his head during a dive in the preliminaries, resulting in a concussion and a cut that later required five stitches. Despite his injury, Greg went on with the competition, earning the highest score of the day as well as two gold medals.

In sports history, many consider the 1992 Olympic men's basketball team to be the best team ever assembled. Featuring the best players of the NBA, including Michael Jordan, Magic Johnson, and Larry Bird, this team absolutely dominated the sport, beating each of their eight opponents by an average of 44 points.

Even as it was happening, people knew it was special. The team's coach Chuck Daly said, "It was like Elvis and the Beatles put together. Traveling with the Dream Team was like traveling with 12 rock stars. That's all I can compare it to."

1994: Nancy Kerrigan Gets the Medal

The Olympic Games are intensely competitive, with athletes training for years just so they can even get a shot at competing. And some go even further than that. in 1994, the ice skating world was thrown into scandal when Tonya Harding's husband and several hired hitmen attacked her fellow skater, Nancy Kerrigan, hoping to take her out of the competition. Nancy suffered a seriously bruised kneecap, but when on to win a silver medal at the Olympic Games only one month later. As for her saboteur, Harding? She finished in eighth and was later banned from the sport for life.

1996: Kerri Strug and The Magnificent Seven

During the 1996 Women's Gymnastics final, emotions — and adrenaline — were running high. USA was leading Russia, who had won the gymnastics team gold every Olympic Games since 1948 (excluding the 1984 Olympics boycott).

But after a teammate fell twice, the pressure to win rested on Kerri Strug's shoulders during the team's last rotation. During her first vault, however, Kerri slipped on her landing and heard a snap in her left ankle — she'd torn two ligaments.

Taking a brief break before her second vault, Kerri needed to decide what to do: Complete her second vault on an injured ankle, or sit out, giving Russia a chance to take the lead. Kerri chose to go for it. She completed the vault and stuck the landing - picking up her ankle and hopping to face each side of the audience in turn.

The result of Kerri's strength and dedication, despite a serious injury? A 9.712 score and a gold medal for Team USA. Kerri even insisted on staying to receive the medal with her team before heading to the hospital for X-Rays.

1996: Michael Johnson Shatters His Own Record

Wearing gold shoes at the 1996 Summer Olympic Games in Atlanta, Michael Johnson ran the fastest he ever had. Completing the 200 meters in a mere 19.32 seconds, Michael demolished the world record of 19.66 that he had set a mere five weeks earlier.

Right away, competitors and spectators alike knew that they were witnessing a significant moment of Olympic history. A competitor, Ato Boldon, even bowed down to Michael, right there on the track.

There are some games so exhilarating and so intense that you remember them for years after. The 2004 Olympic women's soccer final is one of them. Playing against Brazil, Team USA pulled off a win — and won the gold — with a superb goal scored by Abby Wambach in overtime. Their victory marked the team's second consecutive Olympic medal win, having earned silver at the 2000 Summer Games in Sydney.

There are few athletes as iconic as Michael Phelps. The most decorated Olympian of all time, Michael has already won a total of 22 medals, and he isn't even done yet: He's headed to Rio this year for one more lap.

And in 2008, Michael positively raked in the medals, gaining eight gold during the Beijing games. By doing so, Michael broke Mark Spitz's 1972 record of seven gold medals won in a single Olympic Games.