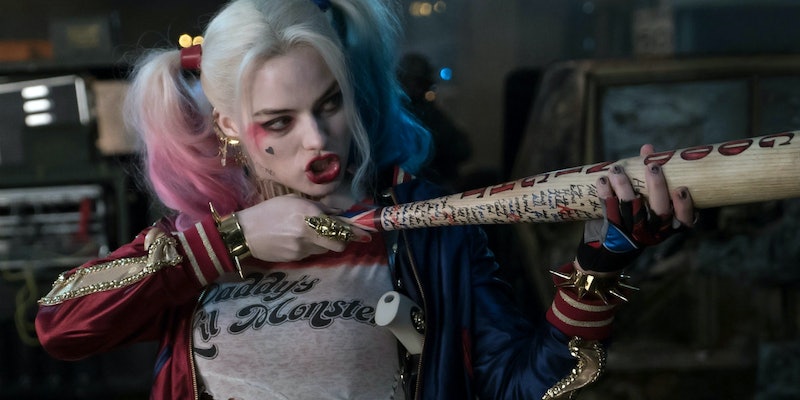 I can already tell you what this year's most popular Halloween costume is going to be, and it's only August. Who doesn't want to look as fashionably dangerous as Margot Robbie's Harley Quinn in Suicide Squad ? Harley's pink and blue pigtails are already iconic, as well as her sassy hotpants and "Daddy's Lil Monster" tee. But no Suicide Squad Harley costume will be complete without Harley Quinn's tattoos. The character sports quite a few in the highly anticipated DC movie, and not just because they look cool. When you watch the film, see if you can spot all of Harley Quinn's tattoos in Suicide Squad and figure out what do they mean.

Most of Harley's tattoos are on her legs, visible through her signature fishnet tights. During a visit to the Suicide Squad set, Yahoo Movies UK got to see her ink up close and personal. Director Davis Ayer shared the story significance of the tattoos. They fit Harley's playful and badass personality, but they also illuminate her backstory. Remember that the unlikely heroes of the movie aren't free men and women when the movie starts. Viola Davis's intelligence pro Amanda Waller taps her rogue squad for their mission while they're in jail for their multitude of crimes.

“She did these herself in prison," Ayer told Yahoo Movies UK. "They’re stick and poke tattoos, prison-style tattoos, that you do when you don’t have a tattoo gun." Not up on your tattoo lingo? "Stick and poke" tattoos are created by using either a tattoo needle or a sewing needle to break skin and then inject the ink. The process is obviously much slower than using a motorized, handheld tattoo gun and, depending on the skill of the "artist," possibly much more painful. It's a popular technique among the incarcerated, since they clearly don't have access to professional tattoo shops but want to adorn themselves with proof of their associations or remembrances of people they're separated from. Harley's tattoos serve as a clue to her current state of mind. "She did them herself out of boredom and desperation," Ayer said.

If you want that Harley look, you don't have to submit to the needle to get it. Hot Topic is selling this temporary tattoo set for $6.50. No one will be able to tell they're not the real thing.

Harley literally wears her reckless and consuming love for the Joker right on her body. "There’s 'I Heart Puddin'', a Joker face, a love heart," Ayer pointed out to Yahoo Movies. What I want to know is: where are the Joker's Harley tattoos, hm? The director stayed mum on the meaning of Jared Leto's character's ink, promising "very specific stories and Easter eggs" for perceptive fans.

Meanwhile, the tattoo bug seems to have bitten Robbie. The actress wielded the gun herself during filming last year and gave matching "Skwad" tattoos to any cast and crew member who wanted one. Is this a secondary career in the making? Regardless, Robbie seems to be taking some of Harley and her penchant for body art with her.