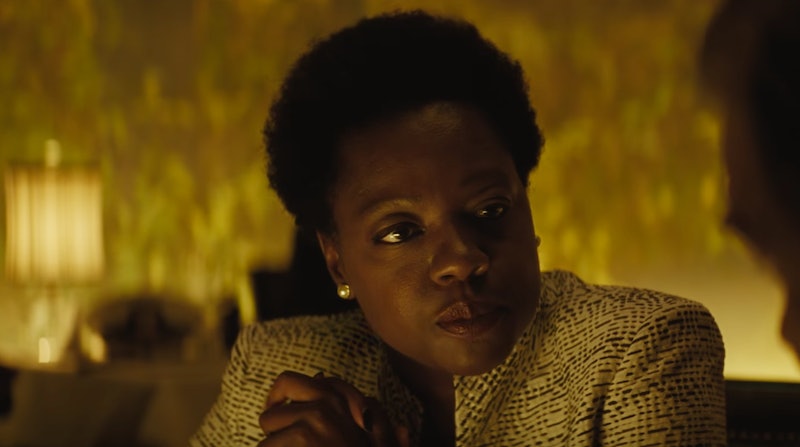 Amanda "The Wall" Waller might not be the most flashy member of the Suicide Squad, but she's the most important member, not to mention the most terrifying. She might not be a psychotic jokester or have a witch possessing her, but Suicide Squad 's Amanda Waller is one woman you don't want to mess with. And nowhere is that more true than in the new movie, which marks DC's new expansion of its cinematic universe, adding onto the Man of Steel films and expanding the world of those movies in a new, villainous way. Amanda Waller might be intimidating, but she's also mysterious — barely shown in the trailers and promotional materials. But just who is she, and what role does she play in the new film?

Amanda Waller is crucial to Suicide Squad — without her, there would be no squad to suicide, no legion of bad guys, and, thus, no movie at all. Created in 1986, Waller made her first appearance in the pages of DC's Legends #1 as a no-nonsense government agent specializing in covert operations. Frequently depicted as stubborn, ruthless, and more than willing to cross the line of morality to do what needs to be done. As the Director of the Advanced Research Group for Uniting Superhumans (A.R.G.U.S.), she leads the Suicide Squad, a team of prisoners and super-villains who are blackmailed into doing her bidding.

Throughout her many storylines, Waller has walked the line between good and bad, serving as both an ally to superheroes and a foe. She's a major threat, and always has been. But, before you jump in and demand what her powers are, be warned: she has none. Waller is just that good. Over the years, it has been revealed that Waller has a doctorate in political science, and a background in Black Ops.

There are a few different versions of Amanda Waller. When the character was originated, she was drawn as a large, middle-aged woman — much more of a desk worker than an actual fighter. Over the years, she's been slimmed down, beefed up, aged down, and that's just in the comics. No matter what cosmetic changes she undergoes, Amanda Waller is consistent in personality: it doesn't matter what size she is or what weapons she wields Amanda waller always has brains, muscles, and a whole lot of power.

In Suicide Squad, Amanda Waller is very much the tough as nails, manipulative and powerful character fans have come to love. "She's a strategist. She's a manipulator. She doesn't fly in the sky or swim in the water. She's just a regular person who can manipulate these superheroes," actor Viola Davis said in an interview with Entertainment Weekly . At a recent NY press conference for the film, Davis described Amanda Waller as "unapologetically brutal," Vanity Fair reports.

Waller isn't just in charge of the Suicide Squad — she's the boss. As she tells Rick Flagg in a new Suicide Squad promo, "All you need to know is you work for me." Something tells me that if Suicide Squad is the hit it so desperately wants to be, it's only a matter of time before we all work for Amanda Waller.