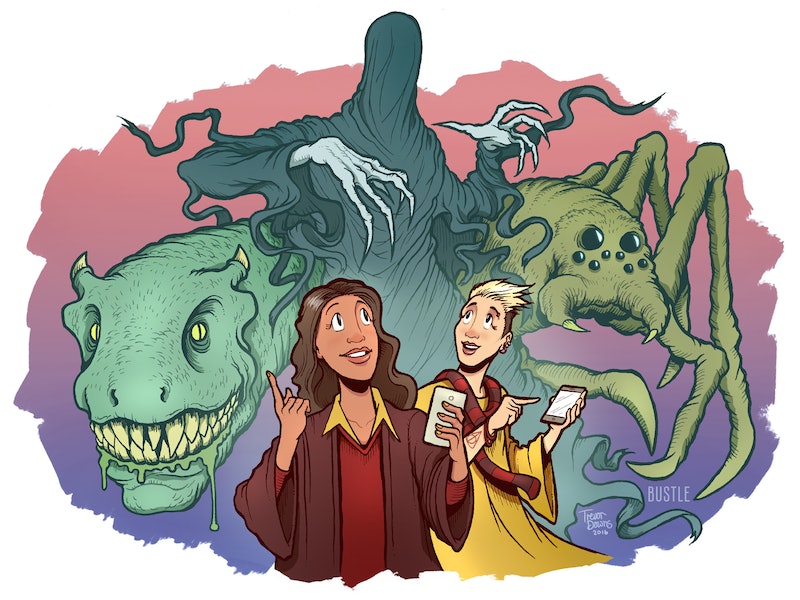 Like any sensible dork, my immediate thought after experiencing the insane trend that is "Pokemon Go" was wondering what a "Harry Potter" Go would look like. Fortunately, I am far from alone in my nerdery; in fact, so many people were on my wavelength that there is already a massive petition to create "Harry Potter Go," and the thirst for it grows realer by the day. Now that Niantic has finally showed the broader population exactly what augmented reality is capable of achieving, it looks like attending Hogwarts as a plain old Muggle of No-Maj might be more possible than ever.

But what exactly would a "Harry Potter Go" app look like? Considering most of us almost straight up passed out when Pottermore first launch, the idea of it is almost too much for a Potterhead to fathom. Thankfully, illustrator Trevor Downs imagined what it would look like so that we could all soak in the awesome of it from the safety of our own couches, lest we actually lose consciousness this time. So while we're waiting for the tech wizards to turn us into actual wizards, hopefully this will both tide us all over and prepare us for the day we are inevitably called in to fight the good fight.

You would, presumably, take the Sorting quiz to determine which Hogwarts or Ilvermorny House you belonged in. From there you would choose your pet, let your wand choose you, and then dress your avatar to the nines to #represent your House. From there your levels would represent the year you are at Hogwarts, each one needing more experience points than the last — how else would you expect to pass your O.W.L.S?

Now it doesn't matter that Hogwarts is hidden from Muggle eyes, because you can bring Hogwarts to YOU. Along the way you can learn spells that enhance your dueling skills, find creatures lurking around your city to raise your experience, and find Horcruxes to advance to the final levels where you defeat the ~great evils~ in your town.

Each spell would require that you learn a certain movement of your wand (er, phone) within the game, and creatures can only be lured to you to study if you study how to handle them in advance. The Horcruxes will require walking certain distances and reaching certain levels before they will reveal themselves to you — whenever you least suspect it.

Then, Duel With Your Friends

Once you've gotten into the swing of things, you and your friends can help each other improve your spell work by going to predesignated spots in your area and doing practice duels with other Houses. Houses will be able to compete for a regional House Cup (FOR THE GLORY OF HUFFLEPUFF!!!), and students will be able to send each other messages within the game through owls to keep each other up to speed.

Of course, when the time comes, all the students who have leveled up with enough experience to fight the ~great evil~ that is coming their way will be invited to engage in a battle that unites all the houses.

So on behalf of everyone who is also hoping for this game, consider this us beseeching you, Gods Of Augmented Reality And Knowing How To Do Things, to make this happen for us. Imagine how glorious and beautiful it would be. Imagine just how many Potterheads would squad up. IMAGINE RECLAIMING THE CHILDHOOD THAT WAS STOLEN FROM YOU WHEN YOU DIDN'T GET A HOGWARTS LETTER ON YOUR ELEVENTH BIRTHDAY.

If anybody needs me, I'll be crying salty tears into my smart phone. Wake me up when this is real life.

For more of Trevor Downs' amazing work, check out his website here.