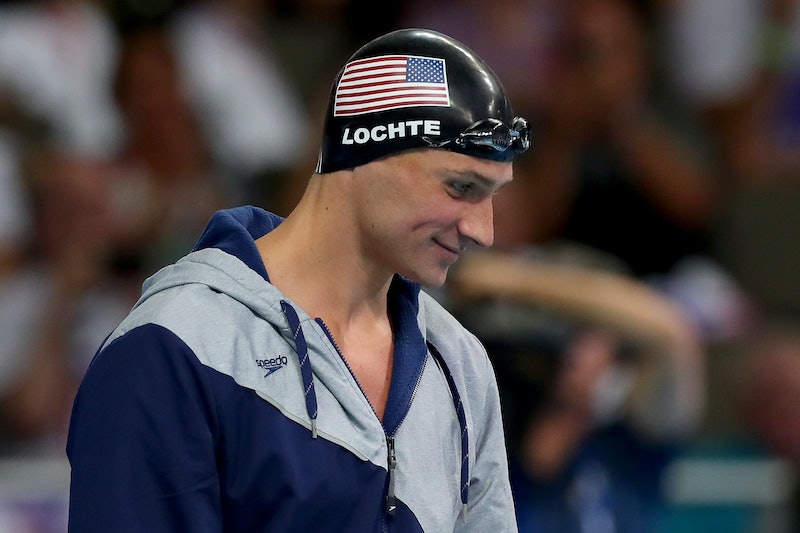 Olympic swimmer Ryan Lochte spent the past four years gearing up for the 2016 Summer Olympics. While he may be in shape for the races to come, the 11-time Olympic medalist is letting us all know that he looks good under his swimwear as well. You know, if you weren't already aware. Lochte dyed his hair a brand new color, something he took to Instagram on Sunday night to share with us all, with the caption, "New look.... Here We Go #Rio#2016 thanks @jennjonesatl #turnup#lightblue." And, I don't know about you, but this is all sounding like a very patriotic lead up to the Olympics to me.

The new color — which he described as light blue — appears to be a nearly white, almost silvery, shade of blue. To me, that manages to cover both the blue and white colors on the American flag. If he completes his hair ensemble with a red swim cap, I, for one, will be pledging allegiance as I root for him even harder during the competition. Whether his light blue hair is meant for that purpose or not, it's no surprise that Lochte is taking his trip to Rio for the 2016 Olympics seriously. This is Lochte's fourth time competing on the Olympics stage, and America is putting their trust in him to take home some more gold.

Lochte is set to compete against fellow U.S. gold medalist — and current medal record-holder — Michael Phelps in the 200 meter individual medley event, which will take place on the international stage on Wednesday, August 10. If this hair doesn't say he's ready... I don't know what does.

With Phelps still sporting his brown hair, perhaps this could be Lochte's secret weapon, his edge over the competition, his way to get Phelps fans to stand up and pay attention to him, too. You have to admit that the new do' is working for him. (Even if he does look like he's following in the footsteps of *NSYNC's Lance Bass circa summer 2014.) Will the trend catch on amongst his fellow U.S. Olympians? We'll just have to wait and see how Team U.S.A. shows up to Rio's opening ceremony on Friday.

But, as of right now, Ryan Lochte's taking home the gold medal for most patriotic hair, and that's an accomplishment all on its own.

More like this
Kim Kardashian Chopped Her Platinum Hair Into A Lob
By Olivia Rose Ferreiro
The Secret To Taylor Swift’s Fringe, According To The Experts
By Orla Pentelow
The “Botticelli Bob” Is The Chicest Summer Style For Short Hair
By Audrey Noble
Why “Patch Snatch” Ponytails Are Everywhere Right Now
By Tomi Otekunrin
Get Even More From Bustle — Sign Up For The Newsletter