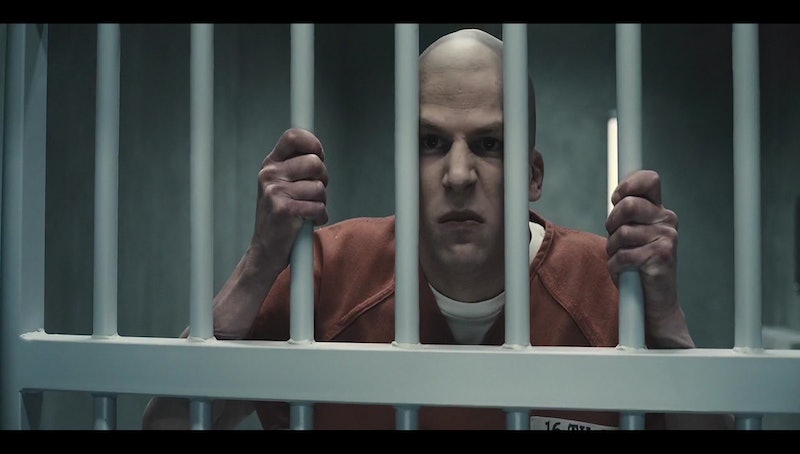 The DC universe is out in full force this year. Between Batman V Superman, that Wonder Woman trailer, and Suicide Squad, the comics bigwig continues to sling superhero realness at its fanbase. And, as fans impatiently await the forthcoming Suicide Squad, several theories about how the newest film will fit into the largest narrative continue to surface. Since Suicide Squad is pretty much a sequel to BVS, characters from the latter film are bound to appear in the former, leaving fans to speculate who the heck it will be. One particularly strong possibility involves a famous Superman villain. Yet while it sounds pretty darn likely that Lex Luthor is in Suicide Squad, he actually (spoiler alert!) doesn't make an appearance.

Unfortunately, Lex has no role in Suicide Squad, but it's easy to understand why people thought he could appear. On the recently released BVS Ultimate Edition, filmmakers added additional footage that shows Batman telling Luthor he is being transferred to Arkham Asylum, which Cinema Blend calls "one of the most frightening locations in the DC universe, as the worst of the worst can dish out their crazy to the employees and visitors." The worst of the worst, you say? Funny, that's exactly what Amanda Waller calls the Suicide Squad. Sounds like we just found a clue, right? Not quite, sadly.

That wasn't the only hint, though. While some of the tracks on the film's soundtrack are pretty vague, the one entitled "Arkham Asylum" would seem like a pretty big giveaway to me. We know that Deadshot arrives in Belle Reve from Arkham, so this song would suggest that we get a few scenes of him actually inside the facility, and if Luthor were to appear, that's where I'd predict he'd make an appearance. Yet while that certainly would've made sense, it's not what actually happens nin the movie. An appearance by Jesse Eisenberg doesn't happen, but that's not to say that his Lex Luthor is out of the DC picture for good. I'm planing on watching the Wonder Woman trailer over and over again to spot a clue, and like many fans, I'm gearing up for Justice League next June.