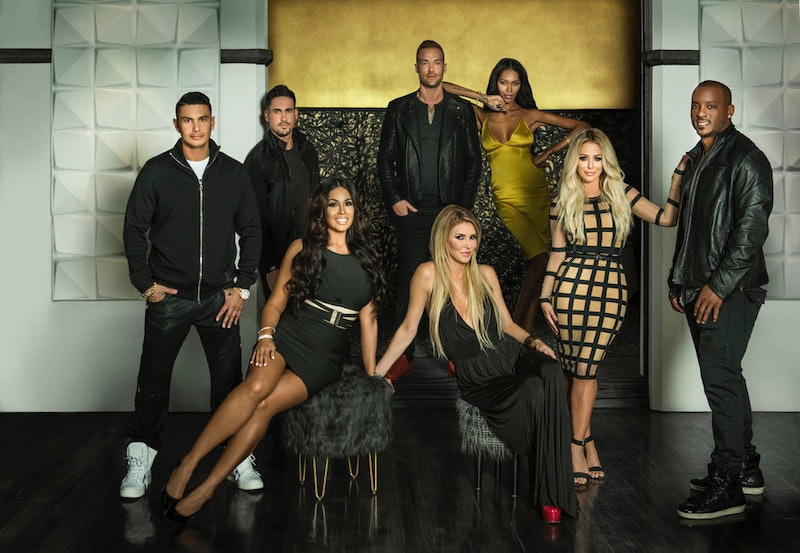 E!'s new series Famously Single has a premise that seemed impossible — collecting a group of hodgepodge celebrities and giving them a crash course of therapy to teach them about romance — and actually helping them fall in love. But, it seems like some celebs have learned a thing or two, and some are even leaving the show with a new romance. With the finale on Aug. 2, you may be wondering if Famously Single will return for Season 2 next year and attempt to help another group of low level celebrities with their love lives. E! has yet to decide about the fate of the show. After this first season, the show has proven that nothing is weirder than watching a combination of reality stars, actors, and musicians go on blind dates and do therapy exercises, but it's pretty entertaining.

Unfortunately, the ratings for this series are somewhat low. While the past few weeks were likely skewed because of the Republican and Democratic conventions, Famously Single 's most recent episode had .19 million 18-49 viewers, according to Showbuzz Daily. Still, E! may be happy to give the show another shot, we'll have to wait to find out. In the meantime, there are plenty of other celebrity finding or maintaining love series that you can watch instead.

This show is like the flip side to Famously Single. Celebrities show up with a relationship that's in trouble, and therapists and a dorm living situation are dispatched to help them.

Even though this show is supposed to be about parental relationships, romance came up frequently, particularly between Courtney Stodden and her mother. Besides, improving your familial relationships can only help with the confidence you need in romance.

Since Josh Murray counts as a "celebrity," this spinoff is full of them. Returning contestants from Bachelor and Bachelorette seasons past try their hand at televised dating in order to fight for the big prize: Making to the end of the show in a relationship.

This season of Keeping Up with the Kardashians is filled with relationship drama, from Khloe and Lamar's damaged marriage, to Blac Chyna and Rob's quickly accelerating relationship.

Are You The One?

Kind of like BiP, AYTO features people who will become famous as members of MTV's stable of reality stars, so watching them look for "the one" is like an investment in their future fame.

Match Made In Heaven

Borrowing the formula of shows like Flavor of Love but adding a holy twist, Match Made in Heaven collects a group of women who all hope to fall in love with former NFL star Stevie Baggs.

Famously Single doesn't have a set return date or even a guarantee of a second season, but even if it doesn't return, there are plenty of other shows to keep up with in the meantime.