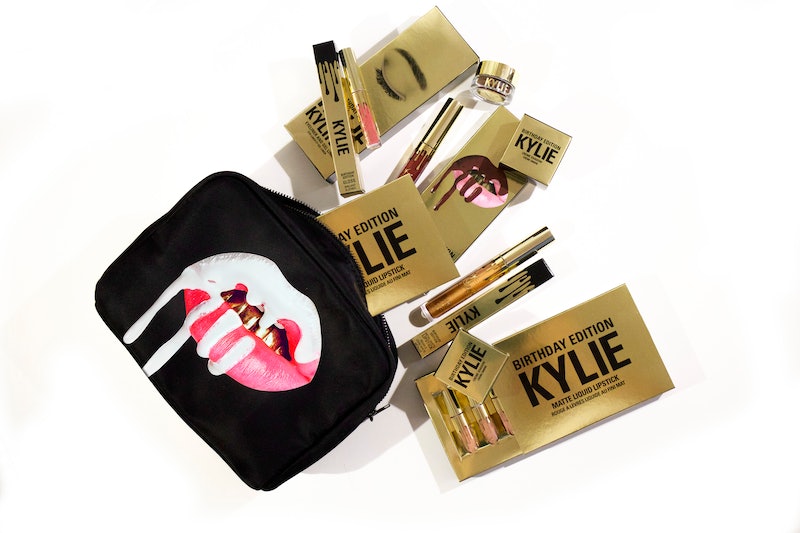 Holy lip kits, y'all. Just when you thought this week couldn't get more thrilling for Kylie Cosmetics fans, Jenner broke some exciting news on Snapchat. The Kylie Cosmetics Birthday Collection sold out within minutes when it launched on Monday at 3pm PST, but good news for those of you who couldn't "add to cart" quickly enough. According to Jenner herself, Kylie Cosmetics will be restocking throughout the next week and a half until August 10, her birthday. Praise King Kylie!

In five minutes, over 300,000 people visited Kylie Cosmetics' website to shop her Birthday Collection launches, according to Jenner on her Snapchat. In case you need the rundown, the collection includes nine pieces: the Kyliner Kit, a Mini Matte Lipstick Set (featuring six of her most popular shades), "Leo" Matte Liquid Lipstick color, Crème Eyeshadows in "Rose Gold" and regular "Gold," "Poppin" Lipgloss, a new Metal Matte Lipstick called "Lord," and a makeup bag.

As of press time, nearly every piece is sold out except for "Poppin," which I'm sure will sell out soon, meaning Jenner made some huge Kylie Cosmetics history today. Not only did she have the most people on her website at one time (according to her Snapchat), but she simultaneously sold out the most amount of products she's ever launched in the same day.

So. Nuts. But honestly, who could blame fans?

Incredible products aside, the packaging is so gorgeous — it's dripping in gold! The fact that everything is limited-edition makes sense why it sold out so quickly on Monday.

As for when Jenner will restock her birthday collection, the answer is unclear at the moment. But Jenner just took to her Snapchat to say, "We have a good amount of quantity, but don't get upset if things sell out because I'm going to be restocking things in the next 10 days." Jenner went on to tell her fans, "Don't worry because we have more and we're going to be restocking very soon."

Be sure to keep checking Jenner's Snapchat for the latest Kylie Cosmetics updates.