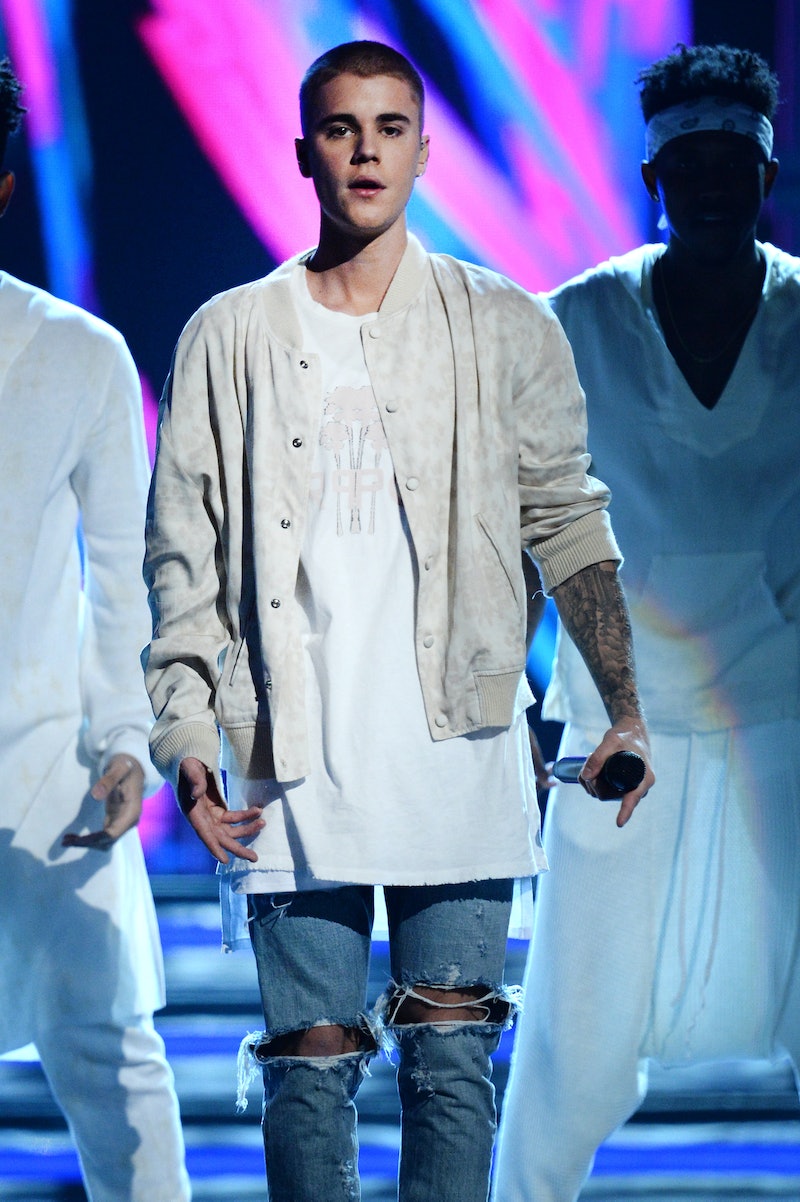 I am all for someone facing the consequences of their actions, but kicking someone while they're down is something I am definitely not for. There's a thin line, and I think one particular young, Canadian pop star just crossed it. Justin Bieber posted a picture of himself FaceTiming Kanye West on Instagram and wrote, "Taylor Swift what up" as the caption. This might not seem like that big of a deal if you've never been exposed to this particular passive aggressive strain of bullying, but honestly, this is just about the biggest Mean Girls move I have seen in a long, long while.

As Just Jared notes, Biebs isn't the only one in the picture with West. His BFF and manager, Scooter Braun is in the screenshot sitting next to the rapper and DJ Martin Garrix, echoing the infamous Mean Girls conference call between Regina George, Gretchen Weiners, and Karen Smith. While we don't know exactly what they were all doing FaceTiming with one another, and the phone call itself could have been totally innocent, I would guess that it maybe wasn't. For instance, perhaps they were conspiring on a Swift-inspired song together, being that they're all in the music making business. Or, maybe, as the caption sorta, kinda insinuates, they were all talking about her. To which I say, how immature.

The thing is, Bieber had nothing to do with the Kimye and T. Swift drama, so this eleventh hour kind of clapback, when he wasn't ever clapped at, is as confusing as it is bothersome. In my humble opinion, this is one area where Bieber should have stayed in his own lane. You know, considering the fact that Biebs has pissed off his fair share of people, both famous and not, with his own, frequent bad behavior. This is truly just in bad form.

What I am trying to say is, capitalizing on someone else's current public shaming doesn't make his own indiscretions any less reprehensible. If anything, Bieber could have used his shiny, new trying-to-be-better image to come to Swift's defense even if they aren't fans of each other, because he knows firsthand what its like to be dragged and it didn't appear that he enjoyed it very much. That would show people that he actually meant it when he said, "Sorry."

When it comes down to it, the flak Swift is receiving after Kim Kardashian shared the audio of the singer and West talking about his song "Famous" is more than enough without bandwagon jumpers adding their two cents. I'm not saying Swift isn't above reproach. But, at the same time, she shouldn't have to face holier-than-thou scrutiny from those who are quite problematic themselves.