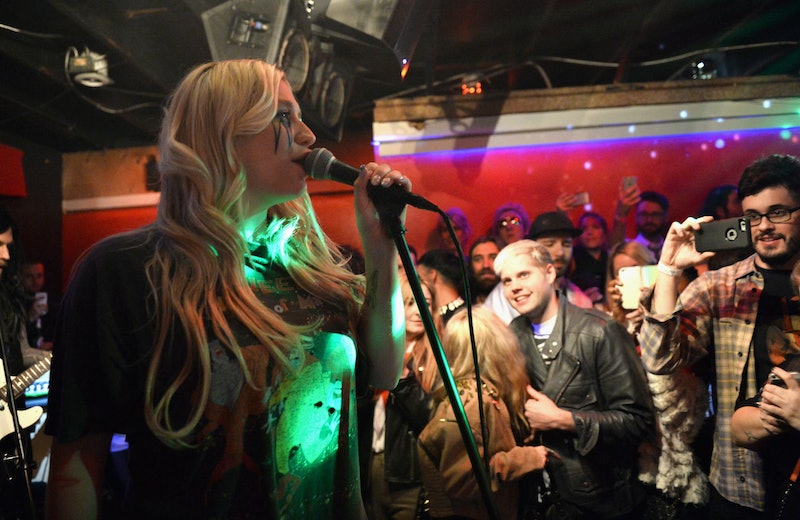 It's been a tumultuous couple of years for Kesha, but it finally appears as if there is a chance she may be returning to some version of normalcy. It was confirmed on Monday that Kesha dropped her sexual assault case against Dr. Luke (real name: Lukasz Gottwald) in California. According to the singer, she dropped the case in order to continue with her music career. To put the current situation in laymen's terms: As Kesha pursues creating new music, she will be working in some capacity with Dr. Luke, because her New York-based case, which revolves around her seeking freedom from her Sony/Kemosabe contract, is still unresolved. Does this mean that Kesha will release a new album this year?

In light of the change in circumstances, there is some reason to hope for new music — and that reason comes from Kesha's camp. As part of a statement released August 1, 2016, Kesha's lawyer, Daniel Petrocelli, stated that Kesha has delivered 28 new songs to Sony, with the hope of releasing an album and single soon. The one caveat is that, if Sony continued forward in creating an album out of the music Kesha has delivered, there is no reason to believe it would be released before the end of 2016.

There is a small silver-lining to this still-murky situation. Over the last year, Kesha has found ways outside of her Sony/Kemosabe contract to record and perform new music. In December 2015, a video surfaced of her performing Led Zeppelin's "Whole Lotta Love" with a previous band of hers called Yeast Infection. She collaborated with Zedd, singing on "True Colors."

Now, she is currently fronting a musical group called Kesha and the Creepies. The group is currently in the middle of a world tour, where Kesha is happily documenting the touring process and regularly taking time to send out love to her fans.

In a statement released by Dr. Luke's representative in response to Kesha dropping her case, he said,

It's good to see Kesha living in a sphere of comfort and joy, in spite of the difficult years she has put behind her. Hopefully, touring will keep her solely in the musical zone and allow her to thrive once again.