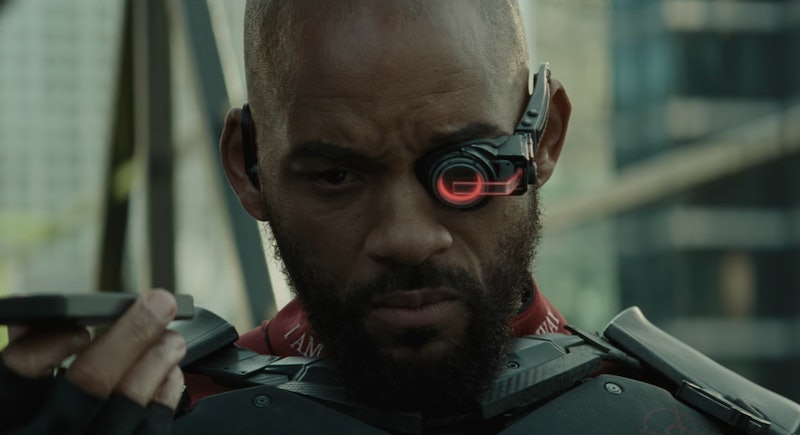 Deadshot does not have superpowers. He can't kill enemies with crocodile teeth or use a magical sword to fight his enemies, but he is the best marksman in the world, which makes him one of the most lethal characters in Suicide Squad. A hired gun, Deadshot made his living as a hit man before being arrested, something that both haunts him and defines him. Unlike some of the other villains in Suicide Squad, Deadshot doesn't necessarily enjoy being evil for evil's sake, and that's in large part thanks to his daughter, Zoe, who is shown briefly throughout the film. Zoe isn't a huge character in Suicide Squad, but she leaves a strong impression. So, if you're thirsting for more details on Deadshot's daughter Zoe and her Suicide Squad future, look no further. Small spoilers ahead!

Zoe Lawton has appeared across multiple DC platforms, in many different ways. In Suicide Squad , Zoe, played by Shailyn Pierre-Dixon, is seen in flashbacks as a young girl who, among other things, doesn't want her dad to be a killer. With Deadshot in prison, the two don't really have a relationship, but Zoe is a constant presence in Deadshot's mind — a moral compass, if you will. "His Achilles heel is his daughter," Smith explained in an interview with Entertainment Weekly . "He loves this little girl and that creates this bizarre conflicting mindset where he enjoys killing people but that's something this little girl doesn't want from him. She wants a daddy."

Zoe plays a similar role in the comics, though her origin has differed over the years. According to Comic Vine, Zoe was originally conceived as the daughter of Deadshot and Michelle Torres, a prostitute and didn't meet her father until she was four. One day, while spending time with her father, she witnessed an attack by Lady Vic and Double Dare, and was the only thing that kept Deadshot from killing the attackers. After he realized that Zoe kept him from killing, not to mention the fact that he had put her in danger, Deadshot left Zoe behind to be a regular kid. Zoe doesn't have superpowers, and she's been erased from some storylines completely as the comics have evolved. So, if you were hoping we'd see Zoe become Deadshot Jr., you're probably going to be disappointed.

Despite being a minor character in the comics, Zoe has appeared in various animated films, and even in Arrow, though her origins have been tweaked slightly. In Arrow, for example, she is shown as the young daughter of Deadshot and Susan Lawton, his ex-wife — a dynamic that is also present in Suicide Squad.

It's unclear whether or not we'll see more of Zoe if the Suicide Squad franchise takes off. No doubt fans would love to see a Deadshot spinoff, but all of that will depend on scheduling and box office results. Even if we do get to see Zoe again, she might look completely different depending on the time period of the film. As for Pierre-Dixon, she has her eyes on another comic book character. "I would love to play Riri [Williams, the black teenager who will be the new Iron Man]," she recently told The Canadian Press.

There you have it DC — if you want to keep Pierre-Dixon, then you might want to get Zoe back for more action.