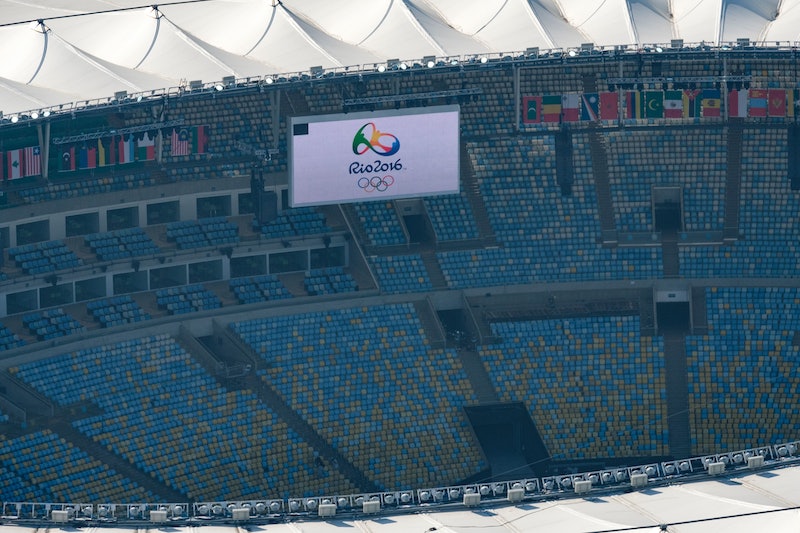 The Opening Ceremony of the 2016 Summer Olympics begins on August 5, and it couldn't come soon enough. On Friday, athletes from all over the globe will congregate, and, adorned in their country's team uniforms, parade around the Macarena Stadium in Rio de Janeiro, Brazil. At this point, the 2016 Summer Olympic games will officially commence, but, in addition to the athletes's initial attendance, there's much more that goes on in the Olympics opening ceremony. Like long standing rituals that take place every year. If you don't know what I'm talking about, maybe it's time for a refresher.

The Olympic closing and opening ceremonies have evolved over the years, but have remained true to their Grecian roots as well; the International Olympic Committee has worked to preserve the authenticity of the Ancient Olympics. Most of the protocol used today, in fact, was put in place during the 1920 Games in Antwerp. Year after year, the opening Olympic ceremonies serve as a way to honor the host country's culture, and officially mark the beginning of the games. So to say the opening ceremonies aren't that important or influential would be a gigantic lie.

According to the "Olympic Charter," the ceremonies main events are as follows:

2. The Participants Parade Through The Stadium

The parade of the Olympic participants then follows, in alphabetical order (except for Greece, who leads, and the host country, who follows in the back). Each country's delegation must carry a name board and their own flag.

3. The Host Country's Head Of State Opens The Games

The IOC President and the OCOG President give an address, and then then the Head of State officially declares the games open.

As the Olympic anthem plays on in the background, the iconic Olympic flag is hoisted on the flagpole inside the arena.

5. The Torch And Lighting Of The Cauldron Begin

The Olympic torch is brought into the stadium by runners, who are relaying it to each other. The final runner circles the stadium before lighting the cauldron flame, which won't be extinguished until the Games end.

6. The Doves Are Released

The Olympic flame lighting is followed by the release of doves to symbolize peace.

7. The Olympic Oath Is Taken By Officials And Coaches

The flag bearers from the parade form a a semi-circle around the rostrum, where officials and coaches take an oath.

Through song, dance, or any other variety of performance, the host country welcomes its visitors with an artistic ceremony that allows others to discover their culture.

There's only one thing left to say: let the games commence.