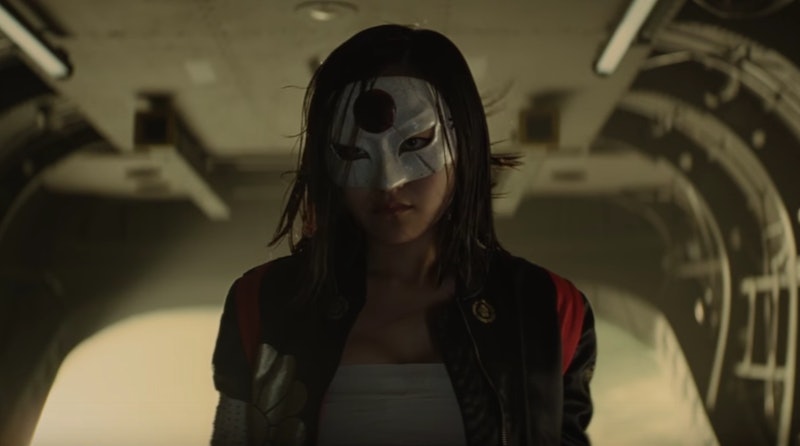 By the time we meet Katana in Suicide Squad, her origin story has already been written. A samurai with a magic sword that traps the souls of its victims, Katana is a vigilante assigned to help Rick Flag keep the Suicide Squad of villains in line. And, like all the vigilante's we've seen before, she's got a tragic story. Before she was Katana, Tatsu Yamashiro was a martial arts champion, married to Maseo and mother to twins, until her husband was ruthlessly killed by his own brother and her twins died. Maseo is long dead during the events of Suicide Squad, but he is not forgotten, although details of who he was are minimal. It begs the question of just who is Katana's husband in Suicide Squad, and what role did he play in her life?

Katana's husband, Maseo, was a fighter trained in martial arts when he met Tatsu. Unfortunately, just as he met his future wife, his brother, Takeo also fell for Tatsu, and the two had a falling out when Tatsu chose Maseo. Eventually, according to Comic Vine, Takeo joined the Yakuza and killed Maseo using the Soultaker, the sword Katana wields in Suicide Squad. Maseo's death inspired Katana to train as a samurai, both so she could avenge his death and so she could use the Soultaker to communicate with him. Throughout Suicide Squad, Katana is seen communicating with her husband through her sword, telling him that she misses him, and holding him close to her in battle.

Maseo doesn't appear in Suicide Squad, but he has popped up in various other DC properties. He has been revived multiple times in the comics, though he has never truly been given back his soul. In Blackest Night , a Green Lantern comic, Maseo was revived by the Black Power Ring, after which he battled with Katana (and Suicide Squad member Killer Croc). Maseo has also appeared on screen in Arrow, The CW's Green Arrow origin television show. In the show, Oliver Queen crossed paths with Maseo and Tatsu (pre-Katana) in his adventures before becoming the vigilante known as the Green Arrow. Over the course of the show's four seasons, Maseo has appeared in 14 episodes as played by Karl Yune. Instead of being killed by his brother, Arrow' s Maseo went on a dark path after his young son was killed, left his wife and joined the League of Assassins, where he eventually died.

Maseo might not appear in Suicide Squad, but if actor Karen Fukuhara, who plays Katana in the film, has a say, we might get to meet him soon. "There's so much story from the point of her husband's death to her story leading up to Suicide Squad — that's something that I'd love to show on the screen," Fukuhara told Comicbook.com of a potential spinoff.

Who knows, we might find out more about Katana's husband after all.