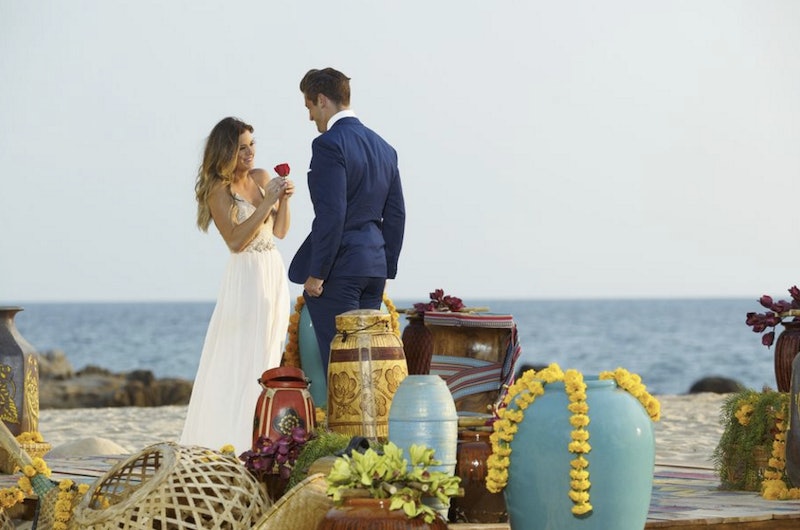 Monday night's Bachelorette finale managed to throw me for a loop even though I had been sure since the very first episode that JoJo Fletcher would choose Jordan Rodgers in the end. (He did get her first impression rose, after all.) The final episode made it seem that JoJo might choose Robby, especially after the conversation with her family in which they called him extremely tempting and exciting things like "husband material" and a "logical" choice. But in the end, she chose Jordan and they went off to share a wonderful (stressful) life (six weeks, tops) together. But they didn't get to that point without some 11th hour drama. During family visits, Jordan didn't ask JoJo's father for her hand in marriage and this did not go over well at all with JoJo. And if you ask me, she was totally buggin'.

First, it should be stated that the issue here is not that Jordan shouldn't have had to ask JoJo's father for her hand in marriage. Do I, personally, think that it's an outdated tradition and that my own dad would laugh in the face if someone ever asked him such a thing? Yes. But this wasn't a case of a man pushing his patriarchal beliefs onto JoJo; she herself said that her father giving his blessing meant a lot to her and made it clear to the guys that it was what she wanted. (Related: Both dudes eventually did end up asking for the blessing of both parents, so that was pretty chill.)

That out of the way, my issue with how this was handled was that when JoJo confronted Jordan about not asking her father, she was totally dismissive of his feelings. For those of you who went to let the delivery guy in during this part, basically, JoJo was annoyed because during Fantasy Suites she and Jordan talked about how he was going to ask her father for her hand during their family visit. But she found out from her family after Jordan left that he hadn't asked. She was instantly devastated about this and proceeded to ask him about it when they met up later.

Jordan explained that he didn't feel like it was the right moment to ask during his convo with her dad and that part of the reason was because he wanted to be 100 percent sure that it would be him in the end, proposing, before he got permission to propose. It was incredibly reasonable, and as someone who always enjoys when contestants on this show step back from the fantasy of it all a bit, it endeared me to him.

The problem was, during this conversation, JoJo was very involved in The Show — which from her perspective made sense. Things were getting down to the wire and she knew that she would have to deliver by choosing a guy who would then propose to her. (A Juan Pablo, JoJo is not.) But while I can see things from her perspective, she could not seem to see things from Jordan's, a guy who was under pressure to confirm that he would propose to a woman from whom he had zero confirmation that he would even be allowed to propose. Jordan was a contestant participating in what is a pretty crazy situation where people get screwed over all the time and in this moment JoJo didn't seem to get that.

Instead, JoJo felt that Jordan should feel confident he would propose to her even without him being sure that she would let him get to that point. It's true that you can love someone without them loving you, but, generally, if you are in an unrequited love situation, you don't then go propose marriage to the person. (You stalk their social media until eventually you realize it ain't happening. Everyone knows that.)

If you look at this show as a total outsider, you know that it would make more sense for a couple to just continue dating casually outside of the show to see if they actually are compatible. But to the people inside the show, it feels like it must end in a proposal. (For the record, sometimes it doesn't, but the pressure is still there.) The conversation JoJo and Jordan had about him not asking for her father's blessing, I think, said a lot about their relationship and the way they communicate. Jordan opened up about how he was feeling and JoJo shot him down, at best, because she was feeling anxious about the show ending, and, at worst, because she actually didn't think that his need to feel the love reciprocated mattered.

In the end, Jordan called JoJo's parents and asked for their blessing and wrote JoJo a genuinely touching letter (I was a couple glasses of wine in at this point, but I felt some mild tear development) explaining his decision to call them because it was better to put himself on the line than risk losing her. And it worked (or, she picked Jordan weeks ago, whatevs), Jordan proposed, she said yes, he accepted her rose (not a euphemism), and they are now doing press and moving to Dallas together.

Maybe Jordan and JoJo will make it work and beat the Bachelor odds, but I can't help but think their proposal talk was a sign of things to come. If one of the biggest decisions of your life, getting engaged, is rushed and the conversation surrounding it is one big communication issue, that's not exactly promising. But seeing as this is reality TV, perhaps the whole convo was contrived and they're somewhere talking about how great it was that they scored that Neil Lane ring, but that they're actually going to take things at a more reasonable pace. Even a cynical reality TV fan can dream.