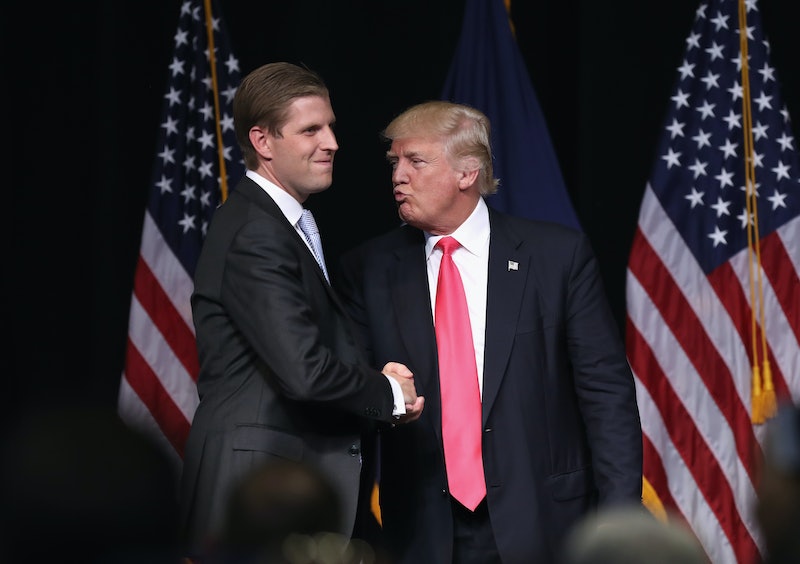 On Tuesday, the Trump campaign set about trying to extinguish yet another fire started by the man at the top of the ticket, GOP nominee Donald J. Trump. And unfortunately, as it turns out, his son is not a very good firefighter — what Eric Trump said about his sister Ivanka totally missed the point, and even worse, it only widened the scope of the Trump family's off-putting attitudes towards sexual harassment.

Over the weekend — already one of the roughest that the Trump campaign has had so far, underscored by the Donald's needless, politically costly, and hugely inflammatory public feud with the Khan family, a pair of Muslim American Gold Star parents — the real estate magnate and presidential aspirant stepped into yet another controversy.

Responding to allegations of sexual harassment directed towards Fox News chief Roger Ailes, Trump suggested that if his daughter Ivanka were ever treated that way, he'd want her to "find another career." And on Tuesday, Eric weighed in as well, saying that his older sister wouldn't "allow herself to be subjected to that," in an interview with CBS This Morning.

I think what he's saying is, you know, Ivanka is a strong, powerful women, she wouldn't allow herself to be objected to it. And by the way, you should certainly take it up with human resources, and she definitely would as a strong person, at the same time I don't think she would allow herself to be subjected to that, and I think that's the point he was making and he did it well.

Needless to say, perhaps, but that's not a very inspiring attitude to take towards allegations of sexual harassment (although what Ailes has now been publicly accused of goes well beyond harassment). It's concerning, in that both Donald and Eric's responses seem to suggest that when a woman is sexually harassed or preyed upon in the workplace, the responsibility to handle the situation lies first and foremost with her.

In Donald's version, she should leave her job and look for a new career, potentially derailing her life because a powerful man viewed her as a sex object rather than a professional. In Eric's version, it's a simple matter of not letting herself be treated that way — that if you're a "strong" and "powerful" woman, you'll just make a complaint with human resources, and... then, presumably, everything gets better? It's a naive view of how sexual power dynamics and harassment can function in a workplace, to say nothing of how intimidated and shamed some women might be by such a situation.

And, obviously, Ivanka Trump is a multi-millionaire heiress — while Eric's right that she's a powerful woman, it's worth wondering what choices are open to the not-so-powerful, who couldn't immediately summon a host of media to their cause.

For what it's worth, if you're keeping score at home, neither Eric nor Donald spent any time specifically criticizing Ailes. And while Eric did call sexual harassment "an absolute no-go," even that relatively mild candor hasn't been echoed by his father. To the contrary, in Donald's case, he's gone entirely the opposite direction — as recently as last week, Trump praised Ailes as a "a very, very good person" who helped the women who're now accusing him of habitual sexual harassment.

As has been the case so often throughout the campaign (most prominently her relatively soft, warm introduction to her father's fire-breathing RNC acceptance speech last month), it will apparently fall to Ivanka herself to try to clean up this mess. She's scheduled to appear on Fox News' On the Record with Greta Van Susteren on Tuesday night, although obviously, it's an open question just how much time Ailes' former network will devote to this particular controversy.

More like this
Boris Johnson’s Leadership Is In Question – Again
By Bustle UK
34 Quotes That'll Inspire You On Juneteenth & Beyond
By Syeda Khaula Saad and Siena Gagliano
How To Fight For Reproductive Rights, Based On How Much Time You Have
By Courtney Young
How 5 People Upended Their Lives To Fight For Abortion Rights
By Hannah Smothers
Get Even More From Bustle — Sign Up For The Newsletter