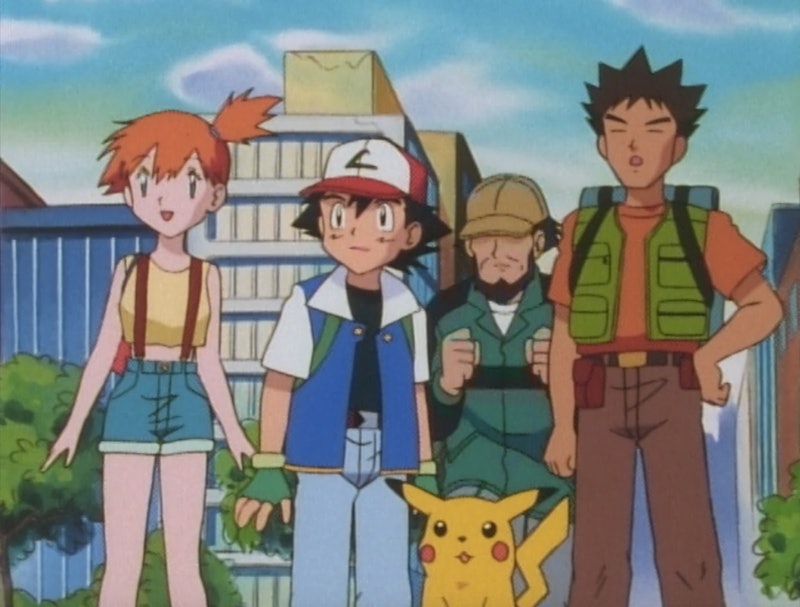 One of the best things about the universal obsession with "Pokemon Go" is that it’s reviving everyone’s inner 10-year-old, and, as we all know, 10 is when you can get your official Pokémon license. Ash Ketchum was the one to teach us that, and now more than either we’re feeling some nostalgic feels towards the worst Pokémon trainer in the world. It’s easy to tune back to the original Pokémon cartoon on Netflix... and realize what a low-key disaster that show was.

And that’s pretty much what I did, paging gently for the first 21 or so episodes of the series. I was thinking of one for each year the franchise has taken control of our lives, and an extra one, just for good luck. Suffice to say, there are certain things that seem a little questionable without the innocence of a tween in the throws of cultural phenomenon. No, I’m a critic and an adult... in the throws of cultural phenomenon. And it’s very clear that while we’ve been able to grow with this franchise, vintage Pokémon episodes are a lot harder to take seriously.

Especially when I know I could completely take down Ash in a battle any day of the week. I have a Magmar, y'all. So, without any delay, here are 19 things I noticed when re-watching Pokémon as a grown-ass adult trainer.

1. Gary Oak Is Using A Car On His Pokémon Journey

Gary Oak is retrospectively incredible and worth the praise he gets in the series. However, the idea of catching Pokémon from a Lexus seems like kind of a Gameshark move. Like, while there's no doubt Ash is an inferior trainer, I'm sure he'd had a bit more luck if he was driven around by a chauffeur.

2. Team Rocket Apparently Had Some Glamor Shots Done For Their "Wanted" Poster

That filter definitely gives off an "ominous" vibe they could never pull off in real life.

3. Chansey Is Not A Nurse

Like, OK, I'm sorry, but don't even try to convince me that those adorable creatures graduated med school.

4. The Chosen Method Of Communication Here Is A Type Of Proto-Skype

So ahead of its time.

5. Ash Has Pretty Repetitive Throwing Technique And Maybe That's Why He's Captured Like 12 Pokémon Over The Past Two Decades

All right, this one is more about laziness on the part of the animators.

6. Misty's Behavior Towards Caterpie Is Completely Uncalled For

Listen, I'm not a fan of bugs, I once killed a silverfish out of fear of my life. But this little friend? He is precious and doesn't deserve Misty's attack.

7. This Metapod "Battle" Is The Most Uncomfortable Thing Ever

Aside from the fact that they're just standing their all... erect and what have you? It doesn't help that their respective trainers keep egging them to get harder.

Although I think screaming "Maximum hardness, Metapod!" might be a fun new phrase to keep things fresh in the bedroom.

8. Speaking Of Maximum Hardness, The Fact That Brock Sits On a Throne Of Rocks, With A Dramatic Spotlight At The Ready

He really commits to his Gym Leader persona.

9. It's Sort Of Incredible That Brock Can Have It All

Like, is the Pewter Gym only open mornings so he can spend his nights as a caretaker? I don't know how he does it.

10. Shady And Sometimes Negligent Dads Seem To Be A Recurring Theme Here

Especially dads of gym leaders, although as far as Sabrina's dad goes, I don't know how I would deal if I basically raised Carrie White. Side Bar: if we're supposed to assume Giovanni is Ash's dad (verdict is still out on that), it further bolsters this trend.

11. Brock Cultivates His Own Uniquely Blended PokéFoods And Doesn't Try To Cash In On That

Or maybe he has an online shop set up for that somewhere, and that's how he can really financially sustain a household of 11.

12. This Rando Decides He's Going To Live With The Clefaries And Nobody Mentions How Weird That Is

Also, I'm pretty sure he didn't ask the Clefaries for their consent.

13. It's A Little Suspect That All The Cerulean Sisters Have Different Hair Colors

I mean, I guess they could all be dying it different shades, they all have Pantene quality hair in common... but where does Misty fit in here? And I know that blah blah blah it's an anime, but, lest we forget, Brock's passel of siblings were all little Brock doppelgängers.

15. Brock Somehow Managed To Pack A Table And Fine China

Ash and I are sharing the same expression right now.

16. Melanie, Who Runs A Pokémon Health Spa, Claims She Couldn't Possibly Be A Doctor But That's Ridiculous Because Literally Anyone Can Be A Doctor In This Show

Did you not see the Chanteys administrating flu shots?

17. Ash Only Legitimately Wins About Half Of The Gym Battles He Gets Into

That includes the Thunder Badge, the Soul Badge, the Volcano Badge, and the Earth Badge. So you know, Ash is a skilled trainer, 50 percent of the time.

Or Proto-Skype has a bad connection. Either/or.

So, you see, when you go back and rewatch one of the most influential shows of our generation, you notice a lot of weird things. But, hey, back then, the idea that we all might be wandering around getting into traffic accidents while we catch our own Pokémon on our handheld phones was a weird thing to think. So, you know, there's that.