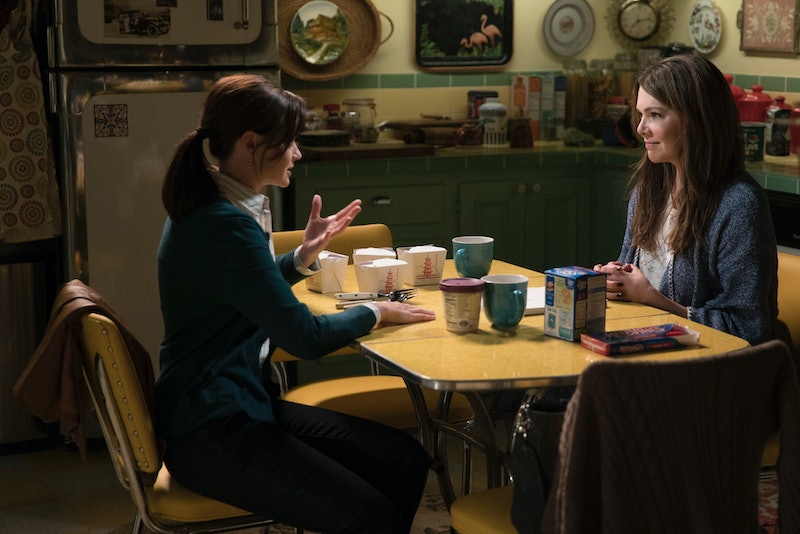 Another day, another Gilmore Girls Instagram post leaving all us fans with so. Many. Questions. This time, it wasn't another publicity shot from the series, though — this time, it was a publicity shot that held a whole lot of meaning to longtime fans of the show. As a result, I zoomed in on one little detail that could mean big things for the Gilmore Girls revival. And here's what I found: This item in the post could mean that Lorelai is pregnant in the revival, and, thus, it could be a huge spoiler for what to expect in these new episodes.

Let’s take a walk down memory lane, shall we? It was Season 5, Episode 21, and Lorelai was at the hospital waiting for Sookie to give birth. In a moment of paranoia, Lorelai calls Rory and confesses that she might be pregnant. And do you remember why Lorelai thinks she is pregnant? It might have something to do with having sex with Luke without protection, sure — that's a simple way for something like that to happen. But the real moment that Lorelai becomes clued into her potentially maternal state is when she eats an apple. The only time she has ever eaten and enjoyed apples, she tells Rory, is when she is pregnant.

Well, lo and behold, Gilmore Girls fans. Wouldn’t you know there’s something red and shiny in the middle of that plate full of Pop-tarts. And, no, it’s not more jam to spread on top. It’s one big, juicy, apple.

And just in case you think I’m reading way too much into this, please remember that the Gilmore girls don’t eat things like fresh produce. They eat pizza and Chinese food and burgers from Luke’s Diner, but they do not eat apples — unless Lorelai is with child.

And the picture doesn’t shy away from pointing the apple out. The caption makes a point of identifying the apple in its own sentence: “Pop-Tart appetizers to hold us over ‘till the pizza comes. And one apple.” Of course the first sentence is a reference to the line where Lorelai presents Rory with a plate of Pop-Tarts after the Bangles concert, but that second sentence? That's completely new. And with a caption like that I think it’s pretty clear that the apple isn’t just there for aesthetic reasons. (Also worth noting: In the Netflix promo for A Year In The Life, Lorelai is wearing a shirt that clearly says "I'm with human.")

So is this a sign from Netflix that a baby is on its way for Lorelai? I certainly hope so. But who could the father be? I’ll bet that entire plate of Pop-tarts that Luke is the father (for the Star Wars jokes alone).

And, trust me guys, I don’t do that lightly.