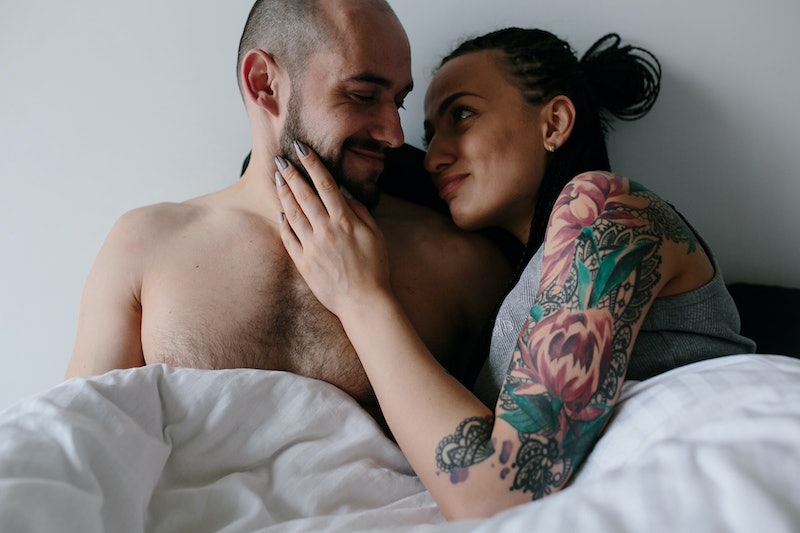 I used to think that scheduling sex was the ultimate in sad old people behavior; the stuff of suburban parents and crappy sitcoms . “Sex should be spontaneous!” I thought. “How unromantic!” I scoffed. “You should just be drawn to each other” I insisted. And then, like most everyone who has been in a long-term relationship, I got complacent. I got really comfortable with my boyfriend and the way we have sex — as he did with me. And I realized that the number one thing you have to do if you want to keep sex alive in your long-term relationship is schedule that sh*t.

Clinical psychologist Glenda Corwin suggests in the Huffington Post that the whole idea of spontaneous sex is actually a myth, anyway. She writes:

New lovers spend hours planning minute details of the next rendezvous. What to wear (‘date panties,' one woman suggests), where to go, what kind of ambience to create for a sexy scene. They change the sheets, just in case. Then they lock their doors, turn off communication devices, spend hours in bed. They turn toward each other, pay a lot of attention, think about each other all the time, fantasize about having sex again — soon.

Doesn’t sound very spontaneous when you put it that way, does it? But even if we all accept Corwin’s analysis that spontaneous sex isn’t a real thing, the word “scheduling” is definitely not sexy. It brings up images of harried parents scratching away at those giant paper calendars, filling in every activity and event and chore, hair frazzled, as children nip at their ankles. And yeah, putting “sex” into the calendar, whether literally or just by setting a day that you’re doing to do it, can definitely make it feel like a chore — if you think of it as a chore.

But we also schedule vacations, right? And nights out, fancy dinners, trips to the movies, and a whole slew of other things that are awesome and fun. When you schedule a vacation, for example, you spend the months and weeks leading up to that vacation thinking about it and planning for it and getting excited for it. You buy special clothing and daydream about what it’s going to be like when you finally get there. You think about the special activities you’re going to do and who you’re going to do them with.

All of that can and should be applied to scheduling sex. Instead of putting it into the “chore” category on your mental calendar, put it into the “vacation category.” Think about how good you’re going to feel. Imagine the parts of your partner’s body that you love and plan out new things that you can try. If you’re into that, buy special clothing for the upcoming event. Knowing that you’re going to have sex — and soon — is a great way to build up excitement about the act and can replace the anxiety that comes along when you start to realize that you and your partner aren’t doing it as much as you used to.

The uber-busy modern couple is the first one that comes to mind when we talk about scheduling sex, but there's another type of couple for whom it also works: Those with mismatched libidos. When you consider the fact that each human being is their own unique combination of desires, hormones, levels of tiredness, and commitments, finding two humans who like each other a lot and are also sexually attracted to each other and match on all of the above starts to sound like a fairytale, doesn’t it? But by scheduling sex, those couples can make sure that they’re still connecting in an intimate, physical way, which might not happen if they only waited for the times that both of them were down.

In fact, a 2012 study by researchers at the University of Toronto Mississauga published in Social Psychological & Personality Science found that people in relationships with mismatched libidos who were willing to have sex with their partner even when their own desire was low reported “enhanced” relationship and sexual satisfaction as well as a higher sexual desire over a four month period. They called this “sexual communal strength” and reported that couples who had it were generally happier in their sex lives.

But it doesn’t have to just be about sex. For couples who are trying to figure out how to get intimacy — sexual and otherwise — back into their lives, sex and relationship coach Charlie Glickman, PhD, recommends starting with scheduling time that’s about physical connection in general.

“Rather than setting rigid expectations, I think it's more effective to make that time about physical connection,” Glickman tells Bustle. “It could be a back rub. It could be brushing your partner's hair. It could be cuddling and talking. And of course, it could be about sex. But if you require it to be sex, you don't leave any room for one or both partners to need some other kind of physical contact.”

So whether it’s more sex you’re looking for or just a good cuddle; whether you’re super busy or just aren’t perfectly matched with your partner, libido-wise; set a day and time with your partner to get intimate. Scheduling sex is way more awesome than you’d think.