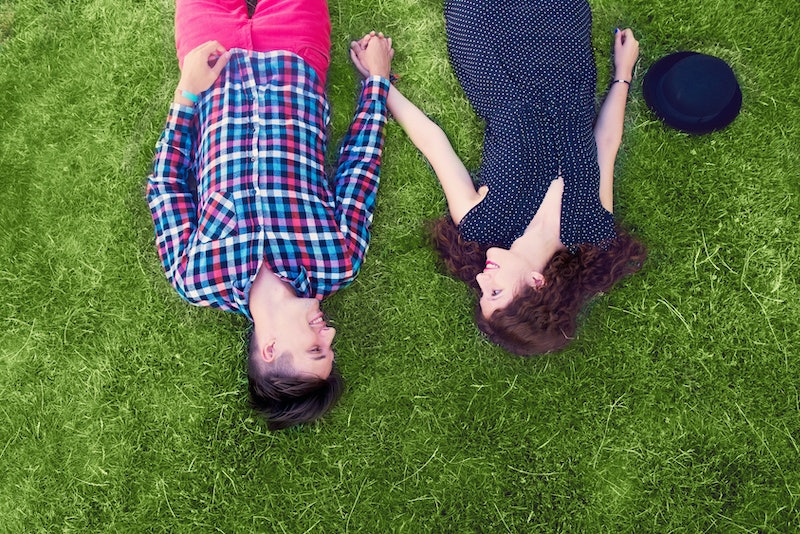 Let's be real: At a certain point in many relationships, the daily sex drops off. So are you having enough sex in your long-term relationship? That depends, says Laurie Watson, a licensed couple's therapist and certified sex therapist and author of Wanting Sex Again. One thing is for sure: Most couples can't maintain the breakneck sex pace that often happens in the beginning of a relationship, and that is totally OK. It's to be expected, and it's even a good thing — it means that we are going back to ourselves, spending more time with friends, and doing all of the things that are harder to do in the first whirlwind six-or-so months of a new love.

Thing is, committed lovers wind up having more sex on the whole, says Watson, who writes for Psychology Today's Married and Still Doing It blog. The therapist, who has been married for almost 30 years, says research points to the fact that people in LTRs wind up having more sex in any given year, because they stay the course. If you feel like your single friends have more sex, the law of averages will come around to high-five you in the end, because even dry spells usually turn themselves around. On that note, here are 10 things to know about sex in an LTR.

"When we are falling in love, we can’t fall out of bed," says Watson. "But at some point, we feel the need to get stuff done." Though a new relationship sex-glow is irresistible, being exhausted at work all day every day is not. "Closeness and separateness must be balanced for happiness, and each takes time," Watson says. "So when our needs for individuality emerge, there is simply less time for the quicksand of the bed."

Scheduling a girlbrunch, having a night off to read a book in bed, taking yourself to the movies and masturdating — these are all important and necessary self-care activities, and your relationship and self-esteem will only be stronger as a result. Less sex after the initial manic infatuation wears off and is replaced by a steadier and more grounded love is a good thing. It doesn't mean that a relationship is "failing," says Watson. On the contrary, less sex than at the outset is likely a sign of a healthy LTR — as long as you're still having sex, that is, which leads me to . . .

Most of us aren't champing at the bit for sex at all times. We all feel tired, bummed out, or just plain not sexy now and again. And although that is totally OK, there are also times when a little sex might be just what the doctor ordered, even if you think you're not in the mood. "It’s normal to feel more desire after you get started than when you first begin" to have sex, Watson says. "Many women feel little physiological 'hunger' for sex at the beginning of an encounter."

That said, "after being stimulated, desire kicks in," says Watson. "Most of us assume that we should feel something first to know we want sex, but relying on memory gets us past the gate, so that arousal can whet our appetite." Once things get rolling, it's likely you'll be on board. In other words, if you wait until you're dying to have sex, you might be waiting too long. Though no one should ever feel obligated to have sex, there's something to be said for making like Nike and just doing it. There's a good chance you'll be glad you did.

3. People In LTRs Have More Sex Than Single People

"It’s normal to think everyone else is getting more than you," says Watson. But "on balance, people in LTRs have more sex." That's because people who stay together for a long time have sex regularly. "Maybe your buddy can’t stop raving about his hot, hot, hot new lover," Watson says, "but when he’s between lovers, he is often having no sex." In the end, people in LTRs come out on top: "Research shows [that] year in and year out committed lovers have more sex," she says.

Moreover, an active and fulfilling sex life doesn't usually happen without strong communication. "It’s normal to work at sex," she says. "We believe erroneously that sex should be natural, should happen without instruction, should magically be in sync. But in reality, everyone has sexual problems at one phase or another, most commonly at the beginning." Talk to your partner about what you love — and what's not working for you. It'll give them the courage to bring up their needs and desires as well.

5. A Good Rule Of Thumb: Sex At Least Twice A Week

On the flip side, no sex engenders no sex: A low libido can be a side effect of being out of the habit. "Desire in women is suppressed" when there's a "lack of partner connection" and/or a "poor body image," Watson says. To combat both, she prescribes more sex. "Two orgasms a week often means she is naked twice a week and her inhibitions don’t build up," she says. Plus, "her partner is often in a better mood, less apt to be cranky for lack of sex."

If you're with someone who has a high sex drive, "a steady supply of sex, while it may not match their ideal frequency, means they can relax and not have to 'overask'" for sex, says Watson. "With sexual scarcity," she adds, "demand frequently goes way up, drowning a woman in what feels like impossible-to-meet need." Sex twice a week or more will lead to regular release of oxytocin (among other things) and a better body image, as you'll be naked regularly with someone you love, which makes you feel desired and, hopefully, sexier.

"Long-time lovers develop shorthand," Watson says. "They know what a look or touch means." People in LTRs don't have to spell it out for their partners: A quick sext dashed off midday or a knowing look after dinner should be enough to convey the message. As time goes on, "a confidence grows between them," says Watson, "giving each the reassurance that their mutual experience will make it satisfying for both."

7. Women Have Better Orgasms In An LTR

Whether you've been with someone for a couple of years or a couple of decades, by now your partner should know your body up and down. As such, "a woman has a much better chance of having a satisfying experience," Watson says. "We have complicated bodies. Only with a great deal of repetitive practice is it possible to know what [a woman] likes — how much, how hard, how fast."

Though the sex may be super caliente at the dawn of a relationship, there's a better chance of orgasm later on. "While many women report higher initial excitement early in the relationship, they report more orgasms in an LTR," Watson says. If this isn't the case, don't be shy to introduce sex toys or try out some fantasies with your partner.

8. Dry Spells Are OK From Time To Time

"It’s normal to have a few droughts," Watson says. These "don't that indicate sex or the relationship is over." Lots of factors can contribute: "Postpartum nursing mothers, preschool child-rearing years, times of mourning, visiting in-laws and business start-ups all might be times when sex is less frequent," says Watson. Be patient with your partner in times of flux, and trust that the sex will pick back up when life calms down.

9. Going With The Flow = Sex Insurance

Don't expect everything to be exactly the same in bed forever — desires change, as do bodies. "Flexibility spells sex insurance," says Watson. If you're in it for the long haul, keep in mind that "bodies age and bring sexual changes that are inevitable." As life goes on, "arousal and orgasm will take more time," she says. "We might need lubrication. Erections aren’t instantaneous. If we believe eroticism lies in a youthful, beautiful body, we will be disappointed." The key, she says, lies in the brain: "The mind is and always has been the sexiest aspect available to share." Amen to that.

10. Planning Ahead Is Not Boring

In a long-term relationship, "sex is the glue that keeps us together and the spice that makes our joint life exciting," says Watson. "It’s normal to have to actively prioritize this part of life, so our to-do lists, children and work don’t pervade all of our time together." This often means date night(s): "Most successful lovers set aside time every week to be relaxed together, to connect over a meal and to have intimacy," she says. "Planning for sex means that we recognize its importance."

Contrary to popular belief, scheduling sex just makes us want it more — and makes it hotter. "When we strategize for sex, we plan exciting dates, fantasize and turn ourselves on just thinking about it," Watson says. This leads to allotting "lots of time for togetherness," she says. "I never understand why people think sex happens spontaneously during [early courtship], when clearly there is much effort, time and money going into the prelude of getting into bed!" Synopsis: Sex only gets hotter as time goes on in an LTR, as both partners learn each others' bodies and fall deeper in love — but like everything else, a thriving sex life takes work.

More like this
Are Quality Time & Gift-Receiving Love Languages Compatible?
By Lexi Inks
The 19 Best Tweets & Memes About Bisexual Awareness Week
By Lexi Inks
These 4 Signs Are The Seductive Sirens Of The Zodiac
By Brittany Beringer
How To Set Rules If You're In An Open Relationship
By Lexi Inks
Get Even More From Bustle — Sign Up For The Newsletter