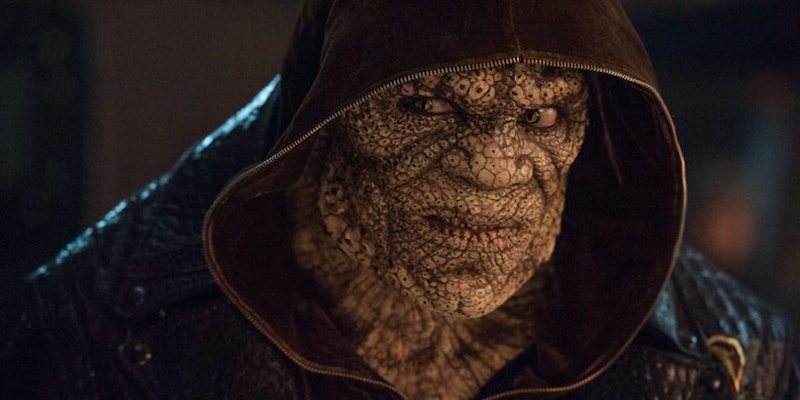 There are some superheroes and supervillains that are more well known than others, but thankfully, we have the new Suicide Squad movie to introduce mass audiences to some lesser known but equally badass characters. Villains like Enchantress, Boomerang, and El Diablo might not be exactly popular or well known, but after this movie, they definitely will be. Another lesser known but equally interesting member of the Suicide Squad is none other than Killer Croc, and after seeing this movie, you'll definitely be wanting to know who plays Killer Croc and where you've seen this guy before.

Adewale Akinnuoye-Agbaje is the actor who portrays the cannibalistic croc in the upcoming Suicide Squad movie. This isn't his first foray into sci-fi/fantasy content — he previously played Mr. Eko on Lost and Algrim the Strong/Kurse in Thor: The Dark World. But acting wasn't Akinnuoye-Agbaje's original career choice. In fact, it took him a long time to find his path as he tried to reconcile his Nigerian heritage with his English upbringing, apparently. In an interview with The Guardian, Akinnuoye-Agbaje revealed that he studied law at Kings College London, but it wasn't until he was working as a student that he was discovered as a model and from there moved on to Hollywood. In the interview, he went into detail how he's developing a movie based on his experiences as a foster child and former Skinhead, so clearly, he's lived an interesting life.

And as an actor, he's so compelling. Akinnuoye-Agbaje doesn't just act. He becomes his character and doesn't shy away from doing his due diligence in researching anything and everything that might help him better craft his performance. In an interview with Esquire, he revealed that for his role as Killer Croc, he researched crocodiles and alligators, but he also researched cannibals, saying:

I did some research on a real-life cannibal who was Japanese. There are some confessional tapes. They're very interesting. I would put them on during the five-hour process of putting on the makeup to put me in the mindset of what it is to be really attracted to flesh. You come away with some kind of appreciation for why someone would do that, why they would eat flesh.

There is no doubt in my mind that that kind of passion and dedication to his craft and character will surely bring an incredible on-screen performance as Killer Croc. Also known as the King of the Sewers, Killer Croc's real name is Waylan Jones and he gets his reptilian look from a regressive atavism gene that's been heightened and mutated by the metagene (aka the gene that, in the comics, separates us lowly humans from all the super-powered heroes and villains.) Killer Croc's skin is so tough and hardened that it's nearly impenetrable, which means things like knives and bullets don't do much against him. In addition, he's got super-strength, regenerative abilities, super-reflexes, and speed. Oh yeah, he also eats people. So in short: you don't want to mess with Killer Croc.

If you're not sure if you should see Suicide Squad, Akinnuoye-Agbaje said in the same Esquire interview, "where the hell are you ever going to see a half-man, half-crocodile talking in a movie? Just go for that alone!" So, listen to the man, and go see this Killer Croc, and the rest of his Suicide Squad companions kick some even more evil butt.