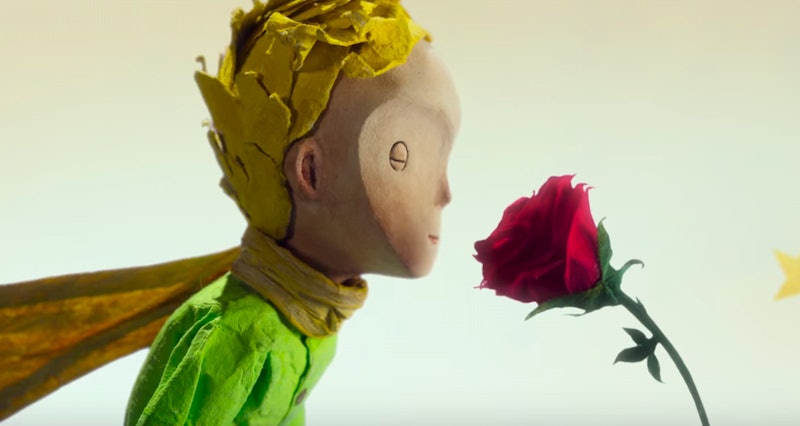 The highly anticipated adaptation of The Little Prince is finally coming to Netflix. This isn't the first time Antoine de Saint-Exupéry's children's book has been adapted for the big screen, though no other adaptations have had any real impact. By all accounts, The Little Prince is a tough book to adapt into a film. A mix between a picture book and a chapter book, it doesn't seem like it would really have enough story to carry a two hour film. And the watercolor illustrations are so iconic, it's nearly impossible for any live action attempts to capture the magic of the original book. Thankfully, though, this newest adaptation of The Little Prince is true to the book, especially in its animation, although the story does have a few tweaks and updates.

The newest adaptation of The Little Prince comes from director Mark Osborne, who used a mix of computer and stop motion animation to create a movie that is part adaptation part homage (less Harry Potter, more Where The Wild Things Are). Instead of sticking strictly to the source material, the movie inserts The Little Prince story about a pilot who crash lands onto an alien planet into a larger narrative. Instead of making a movie about the Prince and his Rose (those of you who have read the book know what I mean), filmmakers decided to make a movie about a young girl who encounters the story of the Prince through her sweet, old man neighbor.

The Little Prince stays close to the spirit of book when it comes to the character of the actual Prince, though there is one major difference: instead of looking at the Prince through the eyes of the Aviator/narrator of the book, audiences will see him through the eyes of The Little Girl. The film's narrative frame is about The Little Girl (Mackenzie Foy), who is so busy studying and being a good daughter to her Mother (Rachel McAdams) that she doesn't have time to enjoy being a kid. The Little Girl is introduced to the Prince by her neighbor, The Aviator (Jeff Bridges), and the rest, as they say, is, well, the original story. To differentiate between the two stories — that of the Little Girl and that of the Little Prince — Osborne told The Observer that he used stop motion for The Little Prince and computer animation for the Little Girl, thus differentiating between the modern story and the beloved classic.

This original spin will no doubt anger some purists, but Osborne insists that the mother-daughter frame is completely inspired by Saint-Exupéry's text. "Everybody has their own version [of the book.] So you can't really make a film of the book," Osborne told The Observer. "So that's when I started to think... maybe I should put the book into somebody's imagination... really I had to create a mirror character of our experience: someone gives the book to you, you read it and it changes your life."

So, before you start the movie, grab some popcorn and some tissues, and get ready to relive how you fell in love with The Little Prince.