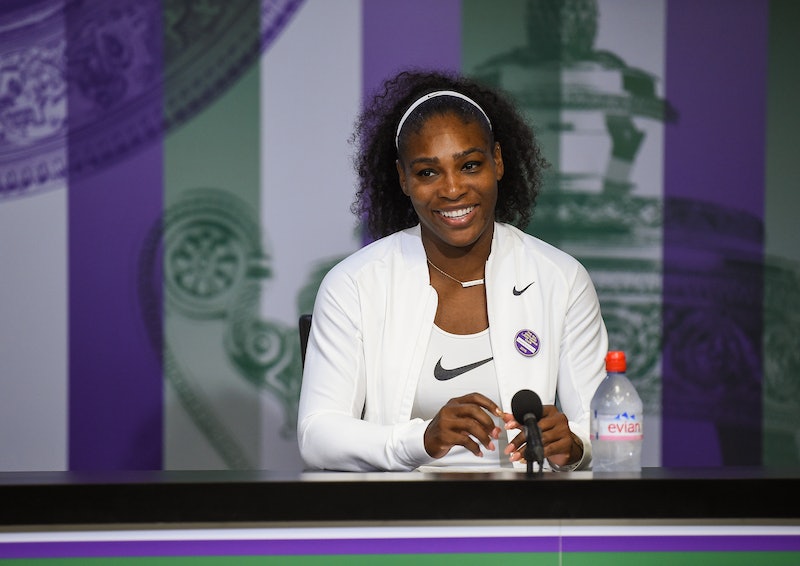 There's no denying that Serena Williams is a champion in every sense of the word. The tennis star has multiple Grand Slam wins to her name and became Sports Illustrated's Sportsperson of the Year in 2015. Considering she's one of the top athletes in the U.S., fans tuning in to Friday's big event must be wondering: Is Serena Williams at the Olympics opening ceremony? Since she's competing in the games in Rio, there should be no reason she'd miss it. And she didn't! Williams has already posted a behind-the-scenes pic of herself at the ceremony with a bunch of her teammates.

The Rio games mark Williams' fourth time competing in the Olympics. She won two gold medals while in London (2012), as well as a gold in both Beijing (2008) and Sydney (2004). It's also noteworthy that three of those wins happened alongside her sister, Venus Williams. On Wednesday morning, NBC reported that both of the Williams sisters arrived in Rio together. Since they're already there, it makes sense that they'd be around for all of the Olympic festivities, including the big opening ceremony.

According to USA Today, the Olympics are an event that Williams really looks forward to. She said, "My experience has been really amazing at the Olympics. I really loved going out there and competing, really just, you know, standing out there and being an Olympic athlete." With a statement like that, it makes it clear she really values the experience as a whole.

Here's hoping that her time in Rio leads to another gold medal, ideally alongside her famous sister. But either way, it's still a major accomplishment to be competing in the first place. Fans will just have to wait and see how things play out during the games themselves.

Regardless, hopefully she makes the most of her time in Rio, which includes celebrating the games' opening ceremony and continuing to make her country proud.

More like this
Jake Daniels Just Became The UK’s First Active Football Player To Come Out As Gay Since 1990
By Sam Ramsden
What Is Jeanie Buss' Net Worth? The Lakers President Is Uber Rich
By Hugh McIntyre
Pete Davidson & Kate McKinnon Are Part Of A Reported Major SNL Cast Shakeup
By Brad Witter
Becca Tilley Confirmed Her & Hayley Kiyoko’s 4-Year Romance With A Heartfelt Note
By Brad Witter
Get Even More From Bustle — Sign Up For The Newsletter