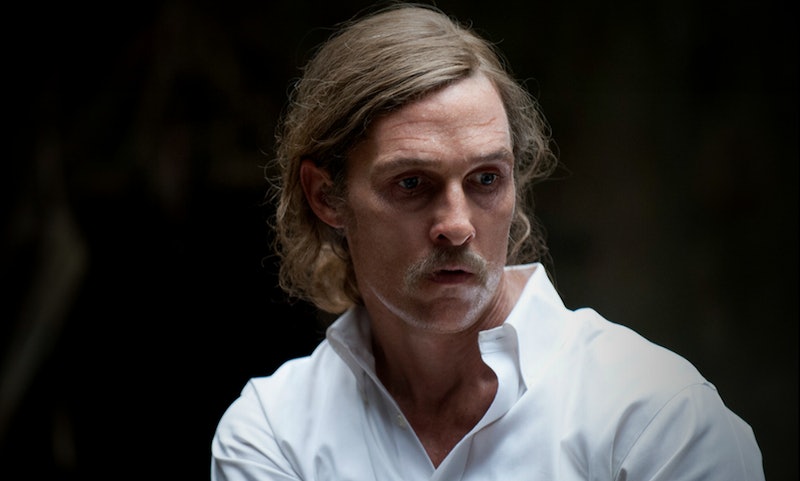 HBO's True Detective wrapped up its inaugural season and while we got a conclusion to the winding mystery, the episode delivered two far more important gifts: another game-changing performance from Matthew McConaughey and proof that there is such a thing as a show about cops that isn't a sugary, empty snack dumped out of a narrative jello mold. Basically, Nic Pizzolatto's incredible series just changed everything.

Sure, True Detective's finale was full of blood and violence, but the most important moment of the evening wasn't the part where the Spaghetti Monster got what was coming to him or even when Rust and Marty miraculously survived the villain's hatchet attack (no matter how improbable it is that Rust could have survived being picked up like a piece of lamb on a shish kabob). It's the final moments of the episode in which Rust gives us his last philosophical monologue. And while the speech itself is an example of beautiful writing, McConaughey's performance brings it up to an entirely new level. The McConaissance rages on.

In those three brief minutes, the contents of which have been transcribed in full by the folks over at Slate, McConaughey proved that not only is 2014 the year of his rebirth as a talented, serious actor, it's also the year that he will, without a doubt, get halfway to an EGOT. He's got the Oscar, and after this final True Detective performance, he's all but clinched the Emmy (which means Jon Hamm is quite likely to play the Leo to McConaughey's, well, McConaughey).

But True Detective's victory is more than just in McConaughey's talent. It's in the fact that the season was able to end a moment as emotional and quiet as Rust's breakdown. Technically, the finale ended on a "happy" note, with both Rust and Marty supporting each other and most of the bad guys taken down — the Tuttles unfortunately manage to escape blame — but there was a darkness to this final piece. Literally. Rust, who got close to death twice in this episode — once in Carcosa when the scarred man was about to kill him and again when he fell into a coma at the hospital — explains the sensation to Marty, saying he felt the love of his father and his daughter in the darkness, the opposition to the light that Rust eventually returned to despite the comfort of said darkness. He says:

There was a moment, I know, when I was under in the dark, that something… whatever I’d been reduced to, not even consciousness, just a vague awareness in the dark. I could feel my definitions fading. And beneath that darkness there was another kind—it was deeper—form, like a substance. I could feel man, I knew, I knew my daughter waited for me, there. So clear. I could feel her. I could feel … I could feel the peace of my Pop, too. It was like I was part of everything that I have ever loved, and we were all, the three of us, just fading out. And all I had to do was let go, man. And I did. I said, ‘Darkness, yeah.’ and I disappeared. But I could still feel her love there. Even more than before. Nothing. Nothing but that love. And then I woke up.

Following the speech, Rust breaks down, but it's not your typical premium cable dramatic cry. He's not just upset, he's actually rupturing and McConaughey's performance is so bare, so unadorned that his emotions slowed everything to a halt in a beautiful way. Not only is the performance incredible, but the scene strips away all our notions of a spectacularly twisted True Detective season one ender. It eases the fears that arose when we realized that not all of our questions had been answered and that the murder network will probably live to see another day and further horrendous abuses. It completely remedies our innate desire to see an Olivia Benson-style resolution in which the conclusion brings swift justice at the last second, with just enough time for a snarky one-liner before the credits roll.

Instead, it's clear that while there was a crime at the center of True Detective, the show wasn't actually about crime. It was about the two humans chasing the clues and the humanity that leads men like Marty and Rust to pursue justice as well as the darkness that guides the bad men they fought to expose. We got our end cap on the crime, but in the end, we needed an emotional, thoughtful conclusion rather than something as easy a simple answer to The Big Mystery. And thanks to McConaughey, that emotional conclusion was far more satisfying than any crime-related season-ender we could have possibly conceived.

Somehow, three minutes in a dark hospital parking lot was all it took to absolutely change the game.