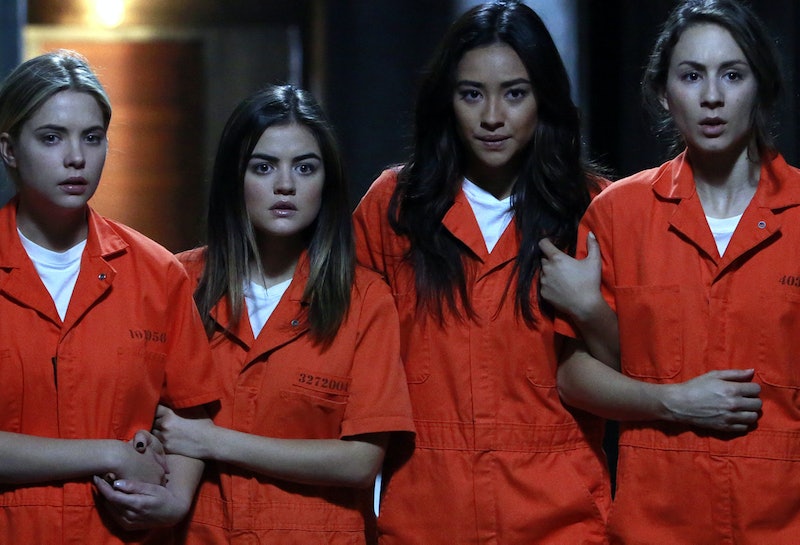 There's no doubt that the ladies of Pretty Little Liars are smart — even Hanna secretly crushed her SATs! — but, just because the Liars know their way around a textbook and can come up a plan to thwart the many As in their life doesn't mean that they don't make seriously dumb mistakes... some which they make time and time again. Take their most recent mistake, for example: after learning that Dr. Rollins is keeping Alison hostage in Welby, the Liars decide not to go to the police and file a domestic abuse claim. Instead, they follow Dr. Rollins to the woods, and, in a momentary lapse of judgment, Hanna rams her car right into the doctor, killing him. Of course, the most consistent mistake on Pretty Little Liars ? Not going to the police. Now, Uber A has a hold of the Liars — and all because they made yet another mistake.

In the Liars' defense, this is their seventh season playing some version of A's game — the girls are bound to mess up here or there. Still, I can't help but cringe when the Liars make the same mistakes time and time again, both in their personal life and in their A takedowns. Here are the 11 biggest mistakes that the Liars have made during the show that I hope they learn from:

1. When Hanna Used Her Five-Finger Discount

This all went down before A came into the picture, but Hanna shoplifting with Mona was directly responsible for Detective Wilden getting involved with her mom in the first place.

After Emily's family told her they were moving to Texas, Emily decided to fake a letter from a university that said they would accept her on scholarship only if she stayed on the Rosewood High swim team. Come on, Em— you're just giving A something to hold over your head.

3. When They Trusted Garrett With Vital A Information

... only for it to be revealed that he was literally sleeping with their enemy: Jenna.

4. When Emily Trusted Nate Without Any Sort Of Fact Checking

Yes, Emily was looking for someone to lean on while grieving her girlfriend, but maybe just throw out a casual mention to Maya's parents about her so-called cousin before you decide to spend a weekend with him alone in a cabin. Especially when Maya's murderer is still at large.

... and realizes that, oh, crap, Maggie actually did have Ezra's son. What does getting intel on your boyfriend's ex ever get you except answers to questions you never really wanted?

6. When The Liars Cover Up Shana's Death

After Shana reveals that she's been out to get Alison since falling in love with Jenna, Shana corners the Liars in a theater and pulls a gun on the girls. Aria accidentally knocks Shana off the stage, killing her. Then, instead of, I don't know, telling the police about accidentally killing Shana in self-defense, the Liars decide to cover it up and internalize their guilt. Not the best move, especially considering the NYPD would probably understand things a lot better than the uber-corrupt Rosewood cops would.

7. When The Liars Make Sure Alison Gets Arrested

Alison's reason for killing Bethany Young was always paper thin, so the Liars probably should have realized that the real A was somehow involved in this scheme.

8. When Mona Agrees To Fake Her Death To Find A

So, technically, Mona isn't an official Liar — but she was working with them when she decided to try to fake her death in order to finally take down A. It made legit zero sense, which is why it wasn't all that surprising when Mona got kidnapped for real and everyone thought she was dead.

9. When Emily Got Way Too Attached To Sara

Oh, you want to date the person who was also kidnapped, Em? The one whom you don't know anything about, save for a mean girl reputation? Don't be too surprised when they turn out to be the person hiding beneath pretty much every A minion disguise.

10. When They Believe Lesli Stone Is A

There's an entire episode to debunking this red herring, which totally distracted the Liars from the fact that Charlotte DiLaurentis was alive and well and not named Cece Drake.

11. When Aria Gave Ella Her Blessing To Marry Zack

Turns out that Zack hits on teenage girls. Not Aria's fault, obviously, but definitely her fault for not believing Hanna immediately.

Seriously, didn't Alison ever read any women's magazine, ever? You don't marry someone mere weeks into your romance. Especially when you can't vet them through literally any family or government organization. Just saying.

13. When They Think All Of The A Business Is Over

Hey, everyone makes mistakes... even if the Liars seem to be making the same ones over and over again.