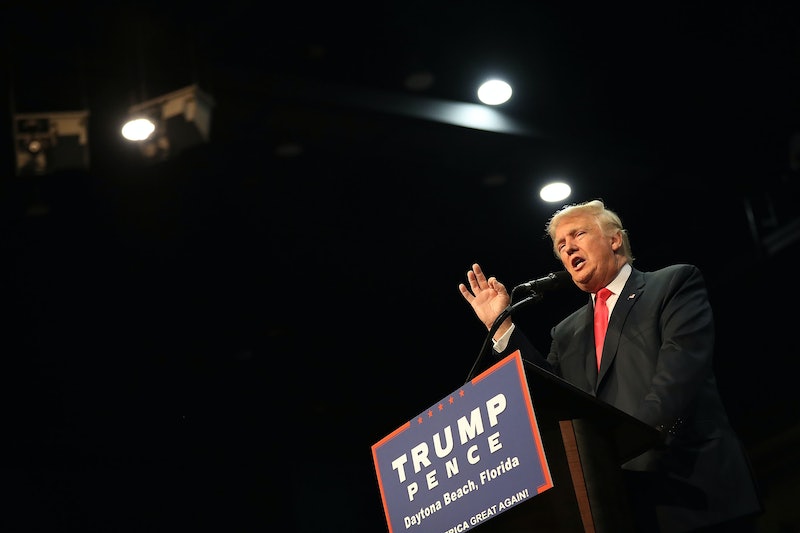 Chatter about Democratic presidential nominee Hillary Clinton potentially being indicted over her email scandal and dropping out of the presidential race has largely died down. But according to ABC News, some Republican officials are considering what they would do if Donald Trump withdrew from the race in light of his continuously bizarre behavior, including his recent ejection of a baby from one of his speaking events and his much-decried sparring with Ghazala and Khizr Khan. It's something that's never happened before, but what would happen if a presidential nominee quit?

According to the Republican Party's rules, in such an event, the 168 members of the Republican National Committee (RNC) would be in charge of selecting a new nominee. The committee is composed of three members from each state and territory, who each represent all their states' delegates. If all members from a state select the same candidate, that candidate earns all that state's delegates, while if they select different candidates, the delegates are divided equally among them. Basically, the RNC would hold a new primary among themselves to fill the ticket, and a candidate would need a majority (not just a plurality) to win.

As for the Democrats, the Democratic National Committee (DNC) would be responsible for replacing their candidate. But the DNC is structured differently than the RNC; it's got a lot more members, and not all states and territories are equally represented. So it probably wouldn't make sense to try to bring back the delegate allocation system to select a new nominee. The DNC members might just hold a simple vote, with each member representing one vote, if Clinton dropped out.

As for who either party's committee members would nominate, that's anyone's guess. The rules don't dictate that it has to be someone who ran for the nomination in the first place, or outline additional criteria the candidate would need to meet. Some may feel an obligation to vote for their former nominee's vice presidential pick, but they don't have to.

It's unlikely that, were Clinton to withdraw, the Democratic Party would nominate Sen. Bernie Sanders, who railed hard against the establishment and the DNC throughout the primaries, although public pressure could play a role in this almost-certainly-not-going-to-happen scenario. They may go for Vice President Joe Biden, or Clinton's VP pick, Tim Kaine. In the slightly less unbelievable event of a Trump dropout, a few obvious choices for a replacement would be Sen. Marco Rubio, Sen. Ted Cruz, or House Speaker Paul Ryan.

For now, we have our nominees. And unless Trump makes many of our dreams come true by withdrawing from the race and revealing this whole thing to have been a terrifying ruse and national wake-up call, it's going to stay that way.