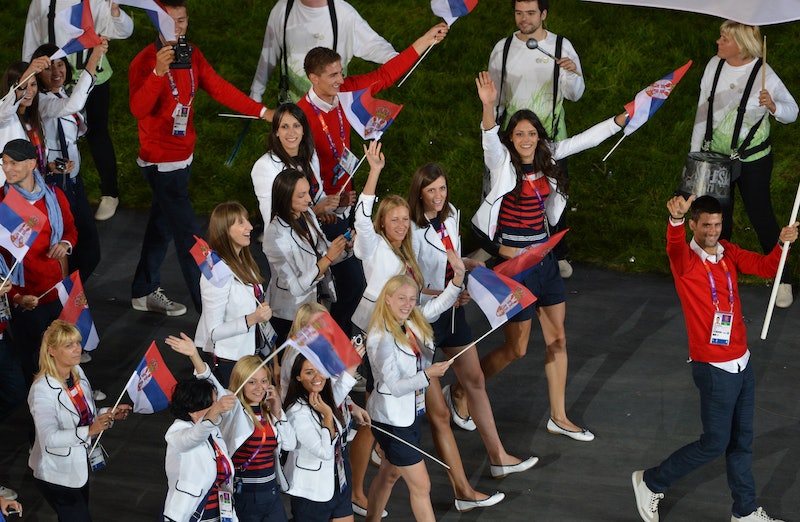 The time has finally arrived: the 2016 Summer Olympics are here. And with them comes the event that I look forward to every two years: the Olympics Opening Ceremony. Because, let's face it, it's seriously the most inspirational event there is. I know, I know — the competitions and world-class athletes chasing the gold are already incredibly inspiring, but seeing teams for every country marching together as they do during the Opening Ceremony? Priceless. But, like every first night that has come before, there were a ton of huge moments from the Rio Opening Ceremony. So many, in fact, that they put all of the anticipation about what the actual Olympic games in Rio de Janeiro would look like totally on the back burner.

There has, of course, been a lot of press surrounding the threat of the Zika virus and other concerns in Rio, but the Opening Ceremony focused solely on raising awareness for issues like global warming and getting the crowd excited for the games to come. All of the worry and hype leading up the 2016 Summer Games was put on hold while the world watched the Opening Ceremony in total awe. And, as a result, viewers were treated with some pretty big moments that will likely live on in all of our memories. Really, it wouldn’t be an Olympics season without some memorable times for all of us to live through.

1. When The Ceremony Recognized Global Warming

2. When The Amazon Made An Appearance

Making up a significant part of Brazil's real estate, it was great to see this huge part of the culture commemorated.

3. When It Recognized The Indigenous People Of Brazil

What a way to honor the culture of a country.

4. When The Ceremony Acknowledged Brazil's Role In The Slave Trade

By acknowledging its role, it also paid homage to the large African culture still present in the country today.

5. When The Floor Became A Moving City

Behold — the power of the optical illusion.

6. When They Cleared Up That Whole "Who Invented Flight" Thing

Well, then. Cool plane tho.

7. When Gisele Bündchen Did That Crazy Long Walk

She's the only person in the world who could pull that off.

8. When Gisele Was The Taylor Swift Of The Opening Ceremony

9. When Every Athlete Carried A Seed To Help Build A Forest

Has there ever been anything more moving in an Opening Ceremony? Answer: no.

10. The Tonga Flag Bearer And All Of That Oil

The biggest moments? Try the shiniest. I'd be lying if I said I didn't like it a little.