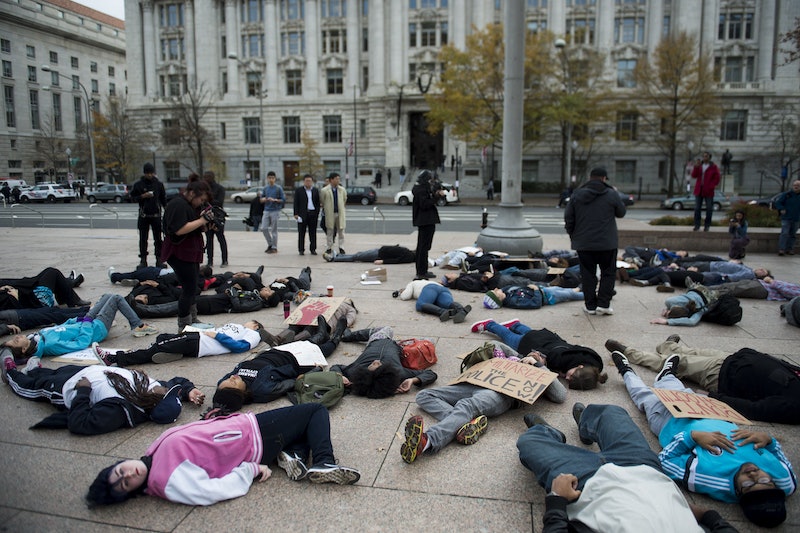 Since the news broke last month that four black men — Alton Sterling, Philando Castile, Delrawn Smalls, and Alva Braziel — had been killed by police in different parts of the country, a petition to the Department of Justice calling for police reform has accumulated over 500,000 signatures and made its way to Washington, D.C. The petition and resulting campaign were launched by a cohort of racial justice organizations with some very specific demands. The petition calls specifically for the federal government to "defund federal grants to police departments that don't value Black lives," "embrace a culture of transparency," and "hold the police accountable."

Color of Change led the charge in this police reform effort, in partnership with Black Lives Matter, the NAACP, Black Youth Project 100, the Movement for Black Lives Policy Table, and Advancement Project. Together, these organizations and their allies delivered the petition to the Department of Justice on Wednesday afternoon.

In the aftermath of the deaths of these black men — as well as black women like Korryn Gaines, who was killed on Monday during a standoff with police — organizers all over the country have been working on next steps. They started petitions calling for justice, launched fundraisers for the victims' families, and held a number of protests. Now they're working on holding the federal government and police departments accountable for a systemic problem.

On Wednesday afternoon, organizers rallied outside the DOJ to amplify the voices of black community leaders and activists, to demand that the government #FundBlackFutures, and to ultimately deliver the petition. The petition asserted that police departments have failed to make "simple reforms" that would help protect black lives, even after previous civil rights investigations by the Department of Justice.

Now that the petition has surpassed 500,000 signatures and been delivered, it is up to officials within the DOJ to respond to it. One possible path forward would be for the Attorney General's office to open up more civil rights investigations and institute accountability procedures as requested by the organizations leading this effort. The petition is also an indicator that organizers have no intention of letting the status quo remain in place. As the petition reads:

Politicians can't keep promising the change we need in local police departments and quietly maintain the status quo by failing to take real action. Pres. Obama and Congress have real power to hold police departments accountable with their funding — if they are really about stopping police terror in Black communities, this is how they show it.

The petition calls attention to something really important. A lot of black communities do not believe that their local police departments were created to serve and protect them, which is why a lot of marginalized people have started seeking alternatives to policing. It is also not the first time that racial justice organizers have delivered a petition to the DOJ. Last summer, after Sandra Bland was found dead in police custody, activists delivered a petition with more than 500,000 signatures calling for Loretta Lynch to open an investigation into her death.

Petitions like these are an effective way to highlight the will of the people, and to make sure elected officials don't let critical issues like police brutality and mass incarceration fade into obscurity.