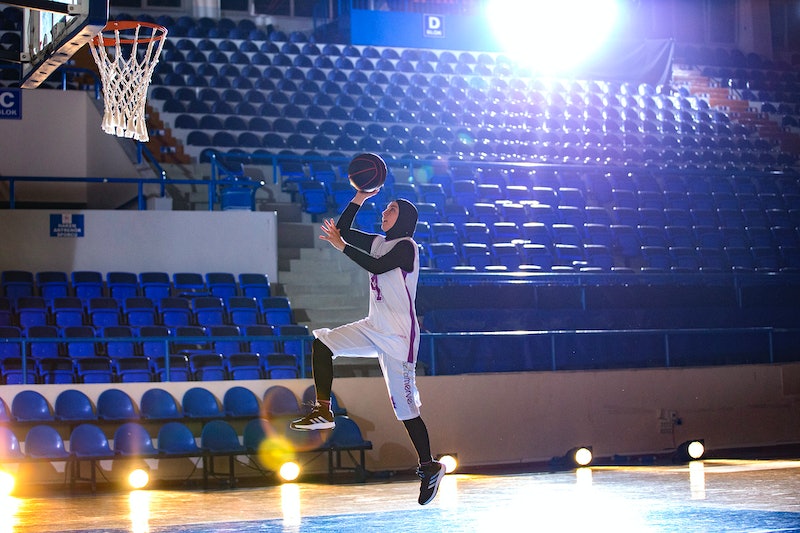 Believe it or not, we live in a world where Muslim women who wear hijabs are not permitted to play basketball at the national or international level. The International Basketball Federation (FIBA) has long had a strict rule that bans headdresses of any kind from the court during FIBA sanctioned games, which includes all professional leagues and tournaments under the FIBA umbrella. As a result, all people whose religious practices include specific head coverings — including Muslim women who wear hijabs — have been unable to pursue their passions, and their professional basketball careers have been stunted. And though a few women who were directly affected by this ban stepped forward to try to make a change, the future of this regulation remains unclear.

Two years ago, Bilqis Abdul-Qaadir, the first Muslim woman in hijab to play basketball at the collegiate level, and Indira Kaljo, a Bosnian-born American basketball player, as well as a number of others, led a Change.org petition demanding that FIBA change their outdated rule preventing hijabi women from competing on the court. They shared their personal stories, enlisted help from organizations like Council on American-Islamic Relations (CAIR), and gathered over 70,000 signatures. FIBA subsequently agreed to offer a two-year provisional period in which women could play in head coverings, which would be followed by an official decision in 2016 on whether the ban would be permanently lifted.

The time has now come. This month, FIBA will decide on the ruling once and for all — and players like Abdul-Qaadir and Kaljo have started a second Change.org petition, lobbying for even more support to help convince FIBA to permanently welcome hijabi basketball players in any game. They've also created the hashtag #fibaALLOWhijab in order to raise awareness across all social media platforms. Bustle spoke with Kaljo and Abdul-Qaadir about the #fibaALLOWhijab cause, why it's so important to keep our eyes on this kind of regulation as we come into the 2016 Olympics, and how we can all help make their dreams come true.

"We are trying to show the world that regardless of our ethnicity or religious background, we are women that want to be able to make a decision for ourselves," Kaljo tells Bustle. She simply doesn't find it acceptable that FIBA is forcing her to choose between pursuing her ambitions and honoring her religious values. She says women everywhere should be given the freedom to do both, even in the world of sports.

Abdul-Qaadir also insists this movement is a significant moment for feminists everywhere. They're not only fighting for hijabi women to be able to play basketball whenever and wherever they want — they're hoping to encourage every woman to go after the things they love most in life, no matter where they come from or what their lifestyle choices are.

"We work so hard to be good at the sports we choose because we have a passion and love for them," she says. "The effort we put on the playing fields comes from deep within and not just the physical aspect. As woman athletes, we are speaking for women all over."

This decision has far-reaching effects. If FIBA allows hijabi women to play, we'll finally start to see basketball players at the Olympic level wearing hijab during competition. Abdul-Qaadir believes this will do more than allow all players equal access to competition opportunities — it will also help us break down taboo and harmful stereotypes about Muslim women, moving us into "a time where America is finally witnessing the strength and power of a Muslim woman." Besides, the more young Muslim girls see women in headcoverings playing in the Olympics, the more likely they'll feel motivated to chase after their own highest aspirations. Additional visibility of Muslim women around the world can only be a good thing.

"We are trying to show the world that regardless of our ethnicity or religious background, we are women that want to be able to make a decision for ourselves."

Kaljo and Abdul-Qaadir are certainly not the only players at the forefront of this campaign — they've also teamed up with another Muslim basketball player, Kike Salihu Rafiu, a Nigerian American who just graduated from Georgetown University, where she was on the basketball team. The National Collegiate Athletic Association (NCAA) allows women to play in headscarves, but not the full hijab, claiming that this rule is meant to prevent injury from occurring to other players (similar to how players aren't allowed to wear jewelry). Rafiu insists this rule holds no real purpose, though, as she's never seen anyone get hurt from a player wearing a headscarf or hijab. In her Change.org petition, she writes that this rule is more discriminatory than anything else.

Asma Elbadawi is another basketball player from the U.K. who is petitioning for this ban to be permanently lifted, as are Saya Raisa Aribatul Hamidah, who is from Indonesia and Ezdihar Abdulmula, who is from the U.K. by way of Libya. They've all contributed to the petition and requested people everywhere turn their eyes towards the cause.

So far, the Change.org petition has 74,324 supporters. All it takes is a simple (electronic) signature on the petition to show that you, too, want to see this ban lifted— because the more people they've got in their corner, the more powerful their message will be.

"It would be wonderful to get the voices of some professional athletes, hijabi and non-hijabi, to voice their support about our movement," Kaljo adds. She wants everyone to know this isn't something that just concerns Muslim women and basketball players — it's a women's rights issue.

This isn't the first time Muslim women have had to step forward and demand for equal rights in sports. In 2012, in response to the demands of multiple Muslim athletes, the International Federation of Association Football (FIFA) allowed a two-year trial to find out if headcoverings and hijabs would be safe for soccer players. Sure enough, after realizing that it caused no harm whatsoever to anyone on the field, they officially granted all players permission to wear hijabs whenever they like.

We can only hope for the same end result here. "We're stuck in a hateful world. Anything that doesn’t fit the norm is deemed unacceptable," Abdul-Qaadir says. She's happy, though, that it's becoming more and more common to see Muslim women as athletes. They work just as hard and are just as talented as any other woman you see on the basketball court, so they deserve the right to play and compete for their country, too.

More like this
Chelsea Woody On Shattering Stereotypes In Surfing
By Leah Groth
10 Times Boris Johnson Got It Wrong On Trans Rights
By El Hunt and Sam Ramsden
If Your Refrigerator Is A Mess, These 25 Organizing Products Can Help
By Courtney Young
Here's Your Daily Horoscope For May 23, 2022
By Mecca Woods
Get Even More From Bustle — Sign Up For The Newsletter