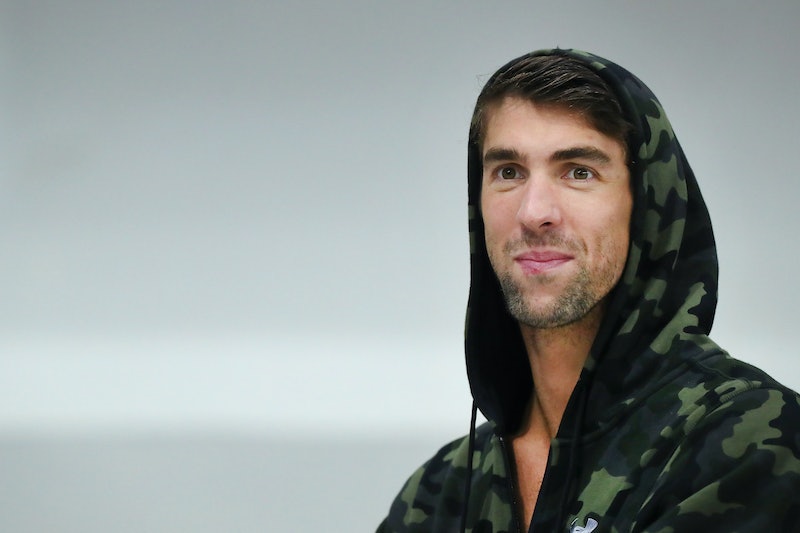 If you follow Michael Phelps on Instagram, you probably notice an adorable little guy who makes it into many of his recent photos — and no, I'm not talking about the Olympic swimmer himself. That baby he's always posing with? That's his two month old son. Phelps and his fiancée, Nicole Johnson, welcomed their first child in May 2016, which means he's been a pretty busy dude while training for Rio! If you've been following along with Phelps' journey into fatherhood, there's probably a major question on your mind: Why did Phelps name his son Boomer? I mean, I'm pretty used to celebrities choosing names for their kids that are out of the ordinary, but this one was really unexpected.

Fortunately, Phelps has been open about his choice in baby names, so wonder no more. In a Facebook Live chat with fans shortly after Boomer's birth, he explained that he and Johnson chose the name for a pretty simple reason: They just liked it. Phelps said he and Johnson were looking for a name that was "something different and something cool." Um, yeah, I'd say they succeeded on both counts. There's no chance Boomer will ever meet another kid with his name on the playground.

But even though Boomer's first name has no particular reason or story behind it, his middle name, Robert, is actually the opposite. In the same chat, he explained that they chose "Robert" for his coach, Bob Bowman, and his grandmother, Roberta. It's pretty cool that Phelps was able to honor two important people in his life at the same time that way, and that Boomer gets to carry a middle name that holds so much meaning in his family.

Boomer's name might be a little unusual, but isn't his entire life so far? After all, he was born to an Olympic athlete and one of the most famous swimmers in the world, so it's pretty much expected at this point that nothing about Boomer's life will be normal. Plus, if he ends up with his dad's swimming talents and determination, there's a good chance he'll be thankful for a name that sets him apart later if he wants to compete professionally himself.

But that's a long way off, and for now, I'm content to gush over the adorable baby photos that proud dad Phelps shares. Hopefully Boomer enjoys his first Olympics! You know, even though he'll probably sleep through the entire thing.

More like this
Jake Daniels Just Became The UK’s First Active Football Player To Come Out As Gay Since 1990
By Sam Ramsden
What Is Jeanie Buss' Net Worth? The Lakers President Is Uber Rich
By Hugh McIntyre
'Derry Girls' Sister Michael Isn’t As Fictional As You Might Think
By Olivia-Anne Cleary
The WAGatha Christie WhatsApp Messages Have Been Released — & They're Wild
By Sam Ramsden
Get Even More From Bustle — Sign Up For The Newsletter