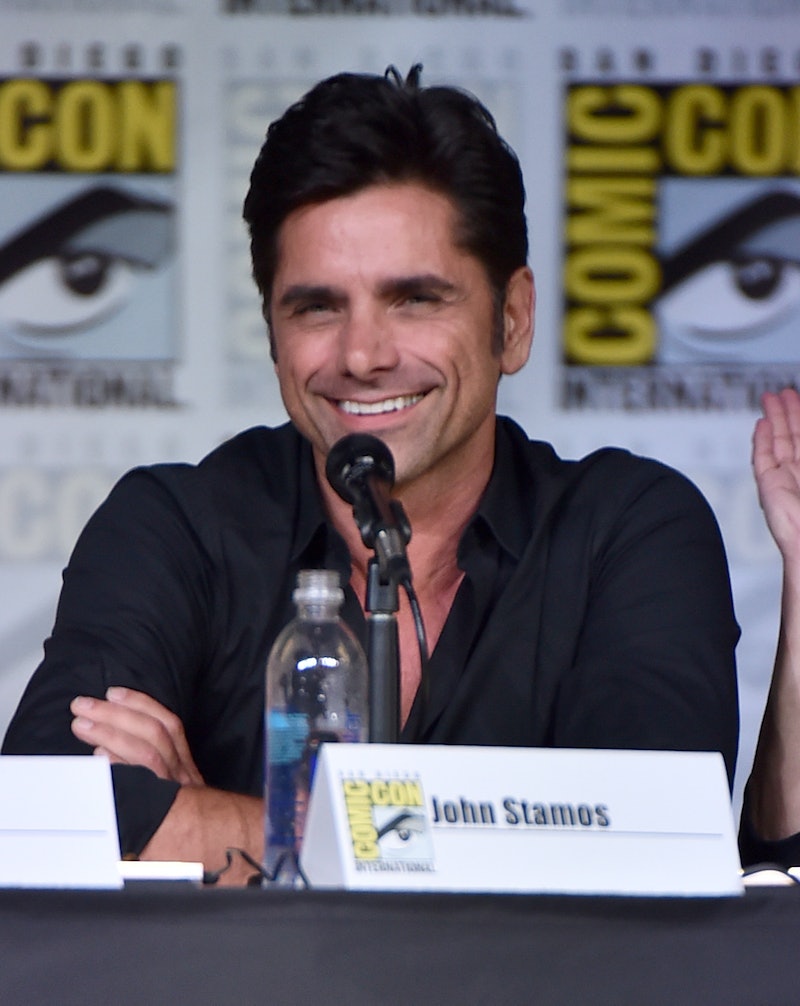 The hit FOX series, Scream Queens, is going to bring us even more hilarious horror in its upcoming hospital-themed second season. When John Stamos joined the Scream Queens cast, fans knew right away that things would be heating up. I mean, really, it's Uncle Jesse. The actor is even teasing us on Instagram, as if trying to get everyone hot under the collar before the season begins. But Stamos' shirtless Scream Queens set photo does more than just show skin. It might also show us what the season season has in store for his character.

In the picture, Stamos is taking off his robe and heading into a public shower stall. Given the horror theme of the show, the nearly nude photo of the star with the caption, "Dirty day on the set of @ScreamQueens #Showertime," is making me more nervous than excited. I mean, if you think about all the horrific death scenes that characters, both highly-anticipated and highly-beloved, fell to in the series — such as the almost-immediate demise of Ariana Grande's Chanel #2 in Season 1 — then you realize no character is safe. No matter how high profile.

And, with the close-up shot of his back, and the eerie feel of the tiled shower stalls, this photo is looking more like a snapshot from a death scene to me. As horror films have proven in the past, the shower is maybe not the safest place to be. Especially if there's a brand new murderer on the loose.

I'm having some serious flashbacks to the Alfred Hitchcock's classic 1960 film, Psycho, and, if it's not Stamos' character that's in danger, then another character nearby may be in danger instead. Dr. Brock Holt (Stamos) has been described as "a brilliant — but secretive — head surgeon," so, if he's not the victim, is he the culprit in all of this? Could Uncle Jesse be pulling a Norman Bates?

It should also be noted that, according to John Stamos' IMDB page, the actor is set to appear in all 13 episodes of the second season. But with the fall premiere of Season 2 quickly approaching, perhaps this scene could be from one of the final episodes. That certainly doesn't take the idea of his untimely death — or the death of someone else at Dr. Holt's hands — off the table. Start prepping your blood-curtailing scream, and enjoy the beauty of this photo while it lasts, guys. You never know when it comes to Scream Queens.

More like this
Selena Gomez’s ‘SNL’ Hosting Debut Had Twitter Gushing Over ‘Barney’ & Wigs
By Stephanie Topacio Long
What’s New On Netflix: A Victoria Justice Rom-Com & The Return Of David Letterman
By Arya Roshanian
The Time Traveler’s Wife Book Has A Heartbreaking Ending
By K.W. Colyard
‘SNL’ Referenced Jesse Williams’ Broadway Leak In A Chaotic Theater Sketch
By Grace Wehniainen
Get Even More From Bustle — Sign Up For The Newsletter