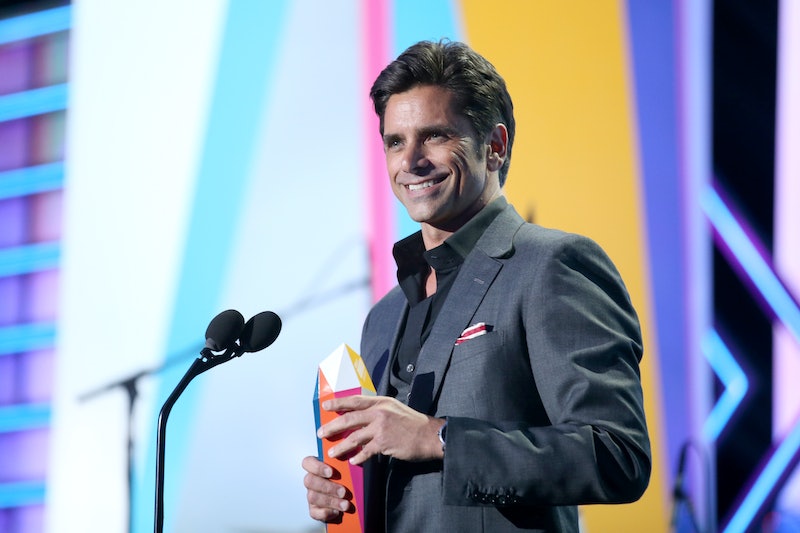 If you watch Fuller House solely for the occasional appearance of John Stamos' Elvis-obsessed Uncle Jesse, then this news will definitely make you say "have mercy!" As reported by TVLine on Thursday, Stamos has joined Scream Queens Season 2, rounding out a cast that includes returning favorites like Lea Michele, Niecy Nash, and Keke Palmer. It will be Stamos' next stab at a Fox series following his sitcom Grandfathered 's cancellation by the network, and fortunately, his new role sounds like a bloody good time. (That's two horror puns in one sentence, in case you didn't catch that.) According to TVLine, Stamos will play Dr. Brock Holt, "a brilliant — but secretive — head surgeon," who works at the hospital where Season 2 is set. It's also where "some of the most fascinating and bizarre medical cases are under observation," which means one thing: Stamos is about to get super creepy on this series.

If we learned anything from showrunner Ryan Murphy's other horror anthology series American Horror Story, it's that we should never, ever trust a surgeon. Season 1's Murder House featured a doctor who reanimated the corpse of his own son and was responsible for the Black Dahlia. Season 2's Asylum — the season that is already drawing parallels with Season 2 of Scream Queens, given the setting — introduced us to a surgeon who was a former Nazi and creating hoards of flesh-eating zombies. That's not to mention the dozens of horror movies that feature less-than-ethical doctors, from Silence Of The Lamb's Hannibal Lecter to The Human Centipede's Dr. Heiter. Could Dr. Holt be added to the names of surgeons we don't trust with a scalpel?

It's totally possible. Dr. Brock Holt may be a soap opera name, but the secretive nature of this head surgeon could mean that he's on of Scream Queens brand-new villains. As we learned last season, looks can be deceiving, and though Stamos may be playing a handsome doctor, this doc likely has plenty of secrets up the sleeves of his scrubs.

If Stamos really does play the slasher this season, here's hoping that he has mercy for some of our beloved characters.