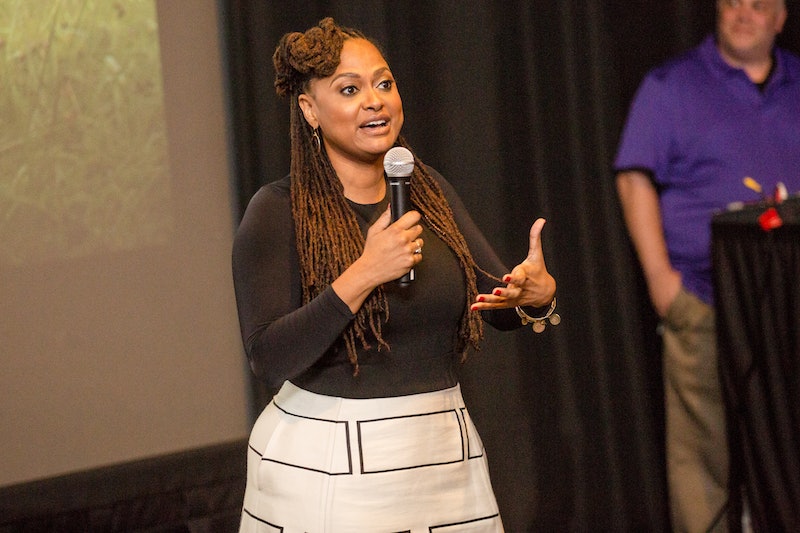 With her adaptation of A Wrinkle In Time, Ava DuVernay is the first female director of color to helm a film with a budget over $100 million. This milestone is certainly a mouthful, but it's also about time — in more ways than one. Disney will produce DuVernay's version of Madeleine L'Engle 1963 fantasy novel, which focuses on a young girl whose government scientist dad goes missing after working on a mysterious project that allows him to travel between dimensions. This landmark definitely should give everyone high hopes for change, since it shows the progress Hollywood has made over the last few years. This isn't to say Hollywood deserves a pat on the back; again, this is a long time coming. But there are a lot of things to be excited about when it comes to DuVernay's historic break in the glass ceiling.

According to the blog Women And Hollywood, only three women have directed a film with a budget of $100 million or more. The first was Kathryn Bigelow with her 2002 film K-19: The Widowmaker. The second is Patty Jenkins with next year's Wonder Woman, the first female standalone superhero movie ever. It took over a decade to repeat this milestone, but less than a year to get to number three. Perhaps the focus on the lack of female directors is actually helpful. Maybe the world won't have to wait too long before they see a fourth woman get a chance to make a big budget film and then a fifth and sixth until it no longer seems like history is being made.

Even the director was cautious of this line between the good and the bad when she tweeted her excitement over the news,

The fact that DuVernay's growing budget comes from a major studio like Disney is also a check in the win column for female directors — not to mention big budget female movies. This movie will not only be made by a woman, but will about about a young woman based on a book written by a woman. When the book originally came out, the fact that L'Engle had written a science fiction tale with a female protagonist was big news. It's actually one of the reasons the author thought A Wrinkle In Time was turned down by many publishers.

It's only fitting, then, that the movie version of the novel is also making progress and news with DuVernay. She is the example, and hopefully not the exception, that big studios are taking female directors seriously for their big films. And major films that are female-friendly, too. Her much deserved good fortune could be a sign that women will start to get a chance to grow within the industry at the same rate their male counterparts have been.

Often, female directors are relegated to indie films with smaller budgets. Even when a woman makes a small film that gets buzzed about, she rarely gets the chance to try her hand at a big budget film. Statistics show that young male directors have a much easier time leaping from indies to blockbusters. As the New York Times wrote last year, this kind of ascent DuVernay is having is "almost exclusively reserved for young guys in baseball caps who remind older guys in baseball caps of themselves." Lena Dunham told the paper that female directors were in a "dark loop," where it's hard to get the experience they need to get hired and vice versa. It's a loop that any post-college graduate in need of a job understands all too well.

But DuVernay shows that doesn't have to be the case. As Women and Hollywood points out, her budget has continued to rise with each film. Her debut, 2011’s I Will Follow, was made for $50,000, while her 2012 follow-up, Middle Of Nowhere, had a budget of $200,000. Her next film, 2014's Selma, had a budget of $20 million, and her latest has her making an $80 million jump to hit a milestone. This is something she was able to do in just five years. "This is a normal path for male directors," Women and Hollywood wrote, "but one rarely accessible to women."

The facts back that up. The New York Times reported that in 2013 and 2014, women were only 1.9 percent of the directors for the 100 top-grossing films. This isn't much of a surprise since, in 2014, the six major studios only released three movies made by a female director. This record DuVernay has managed is certainly good for her, showing hard work does pay off, but it's also good for other women. The director has always been outspoken about the need for more diversity in directing, and she practices what she preaches. She directed the first two episodes of the OWN TV show Queen Sugar, and she's not the only one. Every episode of Queen Sugar 's first season is directed by a woman.

When asked why DuVernay did that, she told People,

If Game of Thrones can have all men for the last 3 seasons, Queen Sugar can have all women and show what a fantastic show can be made from our hands and our minds.

She also heads a production company called Array, which is dedicated to promoting people of color and women filmmakers. It's why DuVernay's milestone isn't just hers; it's everyone's. And it's one that can't be taken for granted — even if it did take quite a long time to get here.

More like this
Amanda Gorman Shared A Powerful Message On Meghan Markle’s Penultimate Podcast
By Darshita Goyal
Claire Foy & Rooney Mara Revisit A Devastating Tale In 'Women Talking'
By Bustle UK
This James Bond Event At Abbey Road Studios Was A 007 Fan's Dream
By Samantha Rollins
These ‘Love Actually’ Plotlines Are “Out Of Date,” According To Director Richard Curtis
By Grace Wehniainen
Get Even More From Bustle — Sign Up For The Newsletter