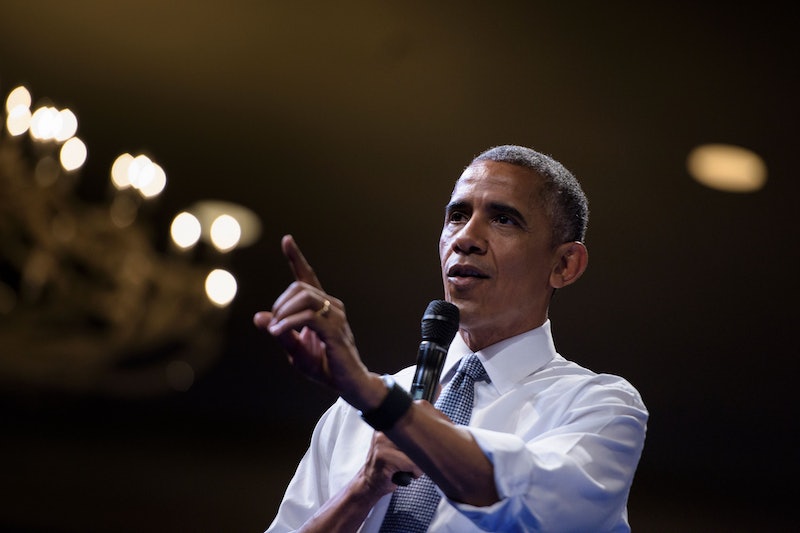 Here’s your required reading for today: On Thursday, Glamour published an article written by President Obama about feminism. The essay, in which the commander-in-chief proudly declares that he is a feminist, is well worth reading in its entirety, but I’ve gathered the best quotes from the President Obama’s essay on feminism here. In the article, Obama makes a number of important points about feminism and gender, but there are a few things that I think are really worth noting:

First, Obama explicitly calls himself a feminist. That shouldn’t be remarkable, but it is. The word “feminist” is so often misinterpreted as being extremist or as anti-male that to have a major leader — in fact, the most powerful leader in the United States, the person who represents us to the rest of the world — adopt the term, as if being a feminist is nothing more than common sense, is a big deal. (And it’s not the first time he’s done so!)

Obama also recognizes that, although women have made huge strides in the last century, there is still a long way to go before we have real gender equality. He acknowledges the double standards, the glass ceilings, and the stereotypes that women deal with in general, but, in a more introspective turn, he thoughtfully discusses how gendered expectations have shaped his own family life, describing how Michelle Obama encountered challenges as a working mother that he, as a working father, didn’t face. “Like many working mothers,” he writes, “she worried about the expectations and judgments of how she should handle the trade-offs, knowing that few people would question my choices.”

Finally, Obama emphasizes that gender stereotypes negatively affect men, too, and that fighting for gender equality helps everybody. As much as women face pressure to look and act in certain ways, men also deal with rigid cultural ideals of masculinity that can be restrictive and damaging. Obama captures the importance of gender equality for women and men in what may be my favorite quote from the whole article: “That’s what twenty-first century feminism is about: the idea that when everybody is equal, we are all more free.”

You really should take the time to read the whole essay, but here are some of the best bits to get you started:

1. “[T]his is an extraordinary time to be a woman. … [W]e shouldn’t downplay how far we’ve come. That would do a disservice to all those who spent their lives fighting for justice. At the same time, there’s still a lot of work we need to do to improve the prospects of women and girls here and around the world.”

2. “[G]ender stereotypes affect all of us, regardless of our gender, gender identity, or sexual orientation But I also have to admit that when you’re the father of two daughters, you become even more aware of how gender stereotypes pervade our society. … You feel the enormous pressure girls are under to look and behave and even think a certain way.”

3. “It’s easy to absorb all kinds of messages from society about masculinity and come to believe that there’s a right way and a wrong way to be a man. But as I got older, I realized that my ideas about being a tough guy or cool guy just weren’t me. They were a manifestation of my youth and insecurity. Life became a lot easier when I simply started being myself.”

5. Writing about his daughters: “[I]t’s important that their dad is a feminist, because now that’s what they expect of all men.”

6. “It is absolutely men’s responsibility to fight sexism too. And as spouses and partners and boyfriends, we need to work hard and be deliberate about creating truly equal relationships.”

7. “[E]verywhere I go across the country, and around the world, I see people pushing back against dated assumptions about gender roles. … [Y]ou’re helping all of us understand that forcing people to adhere to outmoded, rigid notions of identity isn’t good for anybody—men, women, gay, straight, transgender, or otherwise. These stereotypes limit our ability to simply be ourselves.”

8. “I want [‘all of our daughters and sons’] to know that it’s never been just about the Benjamins; it’s about the Tubmans too. And I want them to help do their part to ensure that America is a place where every single child can make of her life what she will.”

9. “That’s what twenty-first century feminism is about: the idea that when everybody is equal, we are all more free.”