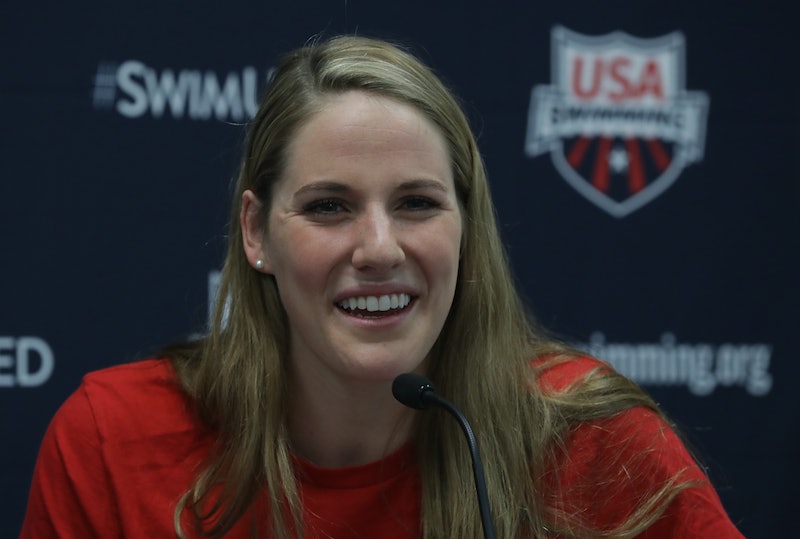 Missy Franklin is a pretty extraordinary person. The swimmer won four gold medals in the 2012 Olympics at age 17, and she has currently holds the world record for the 200m backstroke. But Franklin has something else in her life that's more extraordinary then her skills in the water and more valuable than all of her trophies and titles: a truly amazing relationship with her family. Missy Franklin' parents and the bond they have with their daughter are remarkable, given that Franklin was born under unique circumstances.

Dick and D.A. Franklin were both professionals in their forties when they found out that they would be having a baby girl — something that they didn't think was possible at that point in their lives. In an emotional speech for the Minute Maid #doinggood campaign this past May, Missy noted the above details, acknowledging the sacrifices that her parents made by having her and the sacrifice that she knows she will someday have to make. Addressing her parents, the Olympian said, "One of the hardest things that I have to deal with is that I'm probably gonna about half as much time with my parents as a lot of my friends are gonna get with theirs. But I know for a fact that I would not be the person that I am today if you didn't have me right when you did."

The Franklin family is certainly taking pains to make every second together count, as evidenced by their close relationship. Dick and D.A. shifted their focus from their careers to parenthood when they found out they were having a baby, and they supported Missy in her swimming endeavors as soon as it was clear that she had an affinity for the sport. In fact, it was actually her mother who first introduced Missy to swimming, according to ESPN, because D.A. herself always had a fear of water and didn't want her daughter to develop the same aversion.

As children grow into teenagers, they often drift apart from their parents. But for Missy, it was the exact opposite. She grew closer to her parents and spent as much time with them as possible. In 2013, the then-18-year-old told ESPN, "We're making it cool to love your parents again."

The Olympian also stressed in the same interview how her parents had been a pillar of strength as she rose in the ranks of competitive swimming, offering their wholehearted support but never putting pressure on here. Franklin even told ESPN that it was the notion of her parents' love that helped her push through a nervous moment in the 2012 Olympics. At the beginning of the 100m backstroke, Franklin felt a huge sense of suffocating pressure. But then she turned her focus to the thought of her parents. The swimmer said, "I thought about how much they love me, how much I love them, and how, no matter what happens in the next minute, none of that will change. Then I took a deep breath. And the pressure was gone." Franklin won the gold metal in that event.

It wasn't solely her parents' love for her that made Missy into such an amazing swimmer, but their unwavering support and affection absolutely helped her get where she is today. And as the Olympian prepares for the 2016 Games, it's clear that the love of her parents will be something she can carry with her all the way to Rio.