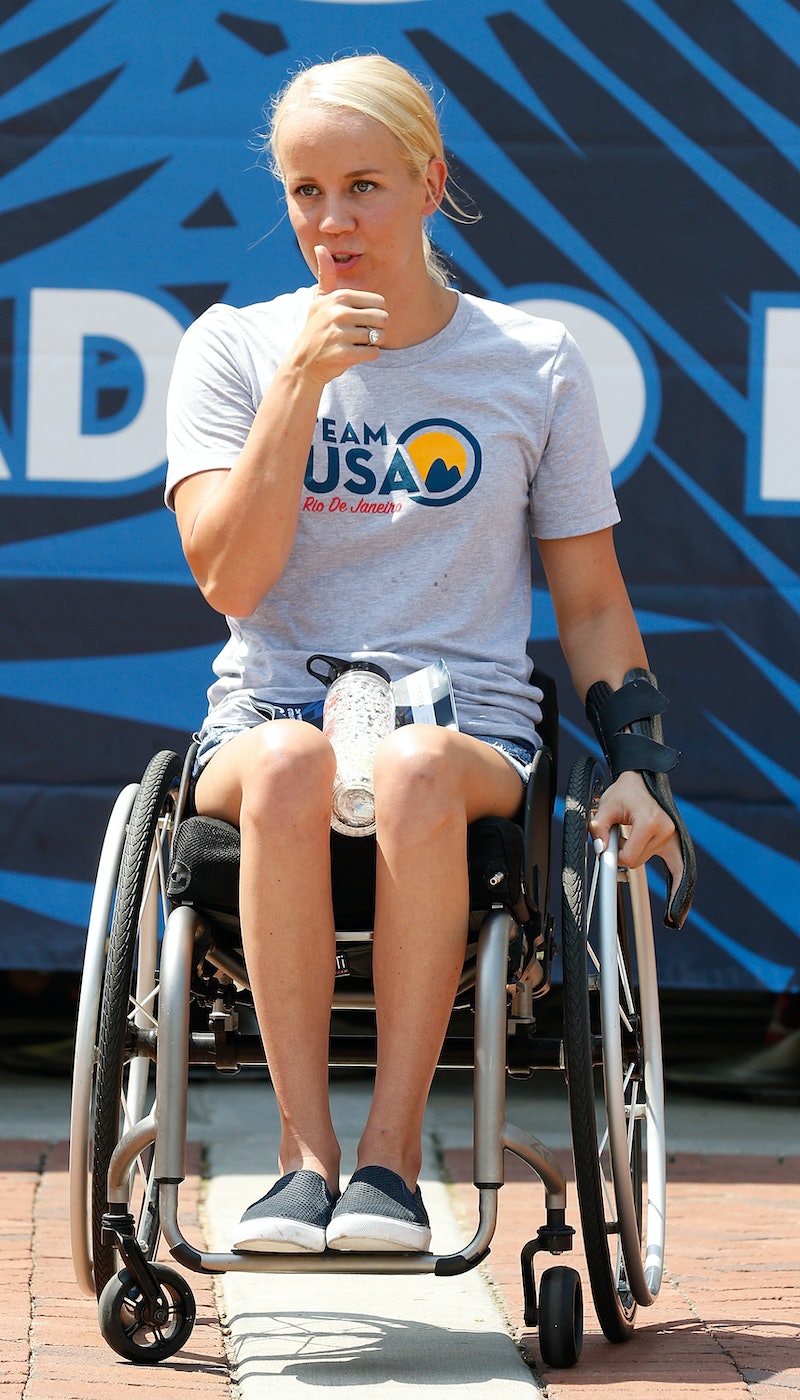 Walking was taken away from U.S. Paralympic swimmer Mallory Weggemann, but swimming was something that could never be taken away from her. Those are the first words Weggemann, who will be one of many female athletes participating at the 2016 Rio Olympics, says in a commercial for Hershey's. In the two-minute ad, she takes us through her journey to become part of Team USA, and it certainly wasn't an easy one. Back in 2008, the Minneapolis, Minnesota native went to the doctor to get a routine epidural injection to treat her back pain after having shingles and left the doctor's office paralyzed from the waist down. In an interview with Swimming World Magazine, Weggemann said she was "actually terrified" of the water after her paralysis, despite the fact the she had been swimming since the age of seven. But she did get back in the water, three months after that doctor's visit, and since then has earned 34 American records, 15 world records and one paralympic record to her name.

The commercial shows Weggemann getting out of her wheelchair and sliding into the pool wearing her Team USA swim cap. It's the place her mom calls her "sanctuary," a place where she "can be out of her chair and be free." It's also where Weggemann found confidence in her body.

Back in April, Weggemann wrote on her blog that being in a wheelchair made her realize how few other people she sees in a wheelchair. When she's out or when she's flipping through a magazine, she is often the only person who looks like her. "Being beautiful and loving our bodies is learning to celebrate our features," she wrote. "Learning the love the very things that make us unique and being happy with who we are." But, her differences, her "flaws" as some may consider them, are what makes her feel beautiful. "Honestly," she wrote, "I feel more beautiful in my wheelchair than I ever felt standing on my own two feet."

While being in a wheelchair can sometimes make her feel lonely, her Hershey's commercial makes it clear that her family is with her. Their love won't be measured in medals, but, in the case of this commercial, it can be measured in chocolate. The ad shows Weggemann receiving a care package from her family that is filled with Hershey's bars. Each includes a handwritten letter in each wrapper letting her know that they are standing by her throughout the games. "Without these people, I wouldn't be doing this," she says in the ad after reading a letter. "And now I'm fighting for a chance to win gold in Rio, and that's not because I'm good."

Weggemann is clearly being modest, since she is good. Very good, in fact. She previously won a gold medal at the 2012 London paralympic games in the 50m freestyle, which she's looking to defend this time around. Her win was one of the most talked about of the games, mostly because, the day before the London opening ceremonies, she was told that she being put in a different category, one where she would face swimmers with physical impairments that were far less severe than her own. But, Weggemann told Swimming World Magazine that she had to move forward and fast. “It definitely threw me off a little bit," she said. "But I knew that I had put in the work behind it to still go out there and perform at high level.” And she did, taking home gold and bronze in the 4×100 medley relay.

But Weggemann's point is that the support she gets from friends and family is what makes this all worth it in the end. Especially since, after sustaining a severe injury to her left arm in a shower hotel, Weggemann also had to overcome another setback. She trained with a brace, which she also now wears in the water. With each of her injuries, she made sacrifices to get where she is — including having to leave her family behind time and time again to train.

In 2012, she talked to CNN about the sacrifices, saying, "I poured my heart, soul, sweat and tears into these past four and a half years to challenge myself, to see just how far I can push my body, to move forward with life, and most importantly because I absolutely love to swim."

Weggemann doesn't focus on the challenging parts of the job; she is more interested in representing paraplegics in a way that shows they are strong. This is what keeps her going, and what keeps so many going. Recently, she appeared on stage at the Democratic National Convention on the 26th anniversary of the Americans With Disabilities Act to recite the Pledge of Allegiance.

On Instagram, Weggemann celebrated the milestone by talking about what that act meant to her and others who know it makes "our society more inclusive." As she explained, "We are one, disability rights are humans rights, we must continue to invest in our future and continue the fight for equal rights for all!" With each competition, Weggemann continues to do just that.