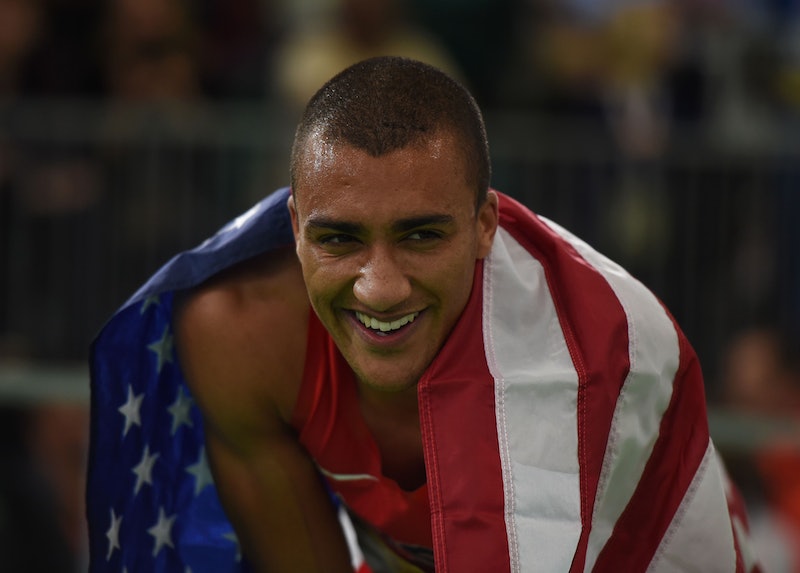 Decathlete Ashton Eaton is getting ready to return to the Olympic stage, four years after a record-breaking gold medal win at the London 2012 Olympics. A lot has changed in that time, and the Rio Olympics will undoubtedly pose new challenges for Eaton, with new competitors and changing abilities. But there is one thing that the athlete can count on to be exactly the same: his mother. After his 2012 Olympic victory, Eaton shamed sons everywhere when he ran straight into the crowd to give his mother, Roslyn Eaton, one of the sweetest hugs in sports history. One thing's for sure: Ashton Eaton's mom knows how to raise an Olympic athlete.

Roslyn raised Eaton as a single mother in a small town in Oregon, a town where, according to Roslyn, Eaton stood out because of his ethnicity. In a recently released P&G "Thank You, Mom" Olympics ad, Roslyn tells the story of how Eaton, who is half white on his mother's side, once asked her if she wanted to hide him so as not to be harassed by racist passersby. "I'll never forget it. He said, 'Do you want me to hide?' And, I think my heart stopped for a second," Roslyn says in the heartbreaking ad. "I said, 'You know what? No. You don't ever need to hide. You always do the best that you can, and that will speak for itself."

True to her words, Roslyn never let her son hide, and encouraged him in whatever activities he wanted to do. She said in an interview with KTVZ that as a 5-year-old, Eaton "wanted to be a Ninja Turtle, the purple one." So Roslyn enrolled him in taekwondo, and he earned a black belt eight years later. Throughout his childhood, Eaton was constantly intrigued by different activities, sports, and careers. "I wanted to be a Ninja Turtle... so Mom signed me up for martial arts. I wanted to be a fighter pilot because I saw Top Gun... so Mom signed me up for the Young Eagles Club of Central Oregon, where I got to sit co-pilot in a plane," Eaton told the crowd at he and his mother's Tedx Talk "How to Raise an Olympian." Eaton added that his mother never discounted any of his hobbies, telling him, "Ashton, if you love it, it doesn't matter. You can be a cartoonist, and I'll be proud of you. As long as you're the best damn cartoonist you can possibly be."

Once Eaton settled on track, Roslyn didn't just expect him to do his best — she also expected the best from his coaches and mentors. Both Roslyn and Eaton attribute Eaton's Olympic success, at least in part, to his high school coach Tate Metcalf and his wife, Aimee, both of whom were in London to watch Eaton win Gold. "Ashton would not have been here if it wasn't for Tate and Aimee Metcalf," Roslyn told Oregon Live following Eaton's big win.

Even as Eaton zeroed in on track, Roslyn and his coaches never forced him to focus on one singular activity, which might help explain his decathlon strengths. More than that, though, by enjoying a host of activities instead of just the one, Eaton was able to have a childhood. "He lived his life, goofed around with his friends," Roslyn told ESPN in a 2012 interview.

More like this
What Is Jeanie Buss' Net Worth? The Lakers President Is Uber Rich
By Hugh McIntyre
Selena Gomez’s ‘SNL’ Hosting Debut Had Twitter Gushing Over ‘Barney’ & Wigs
By Stephanie Topacio Long
Lizzo Shared An Iconic Throwback Robert Pattinson Photo With No Context
By Brad Witter
Watch 'Drag Race' Queens Get New Drag Names In This Exclusive 'iCarly' Video
By Jake Viswanath
Get Even More From Bustle — Sign Up For The Newsletter